The nine groups generated almost $60 billion in revenues from mobile services in 2018. 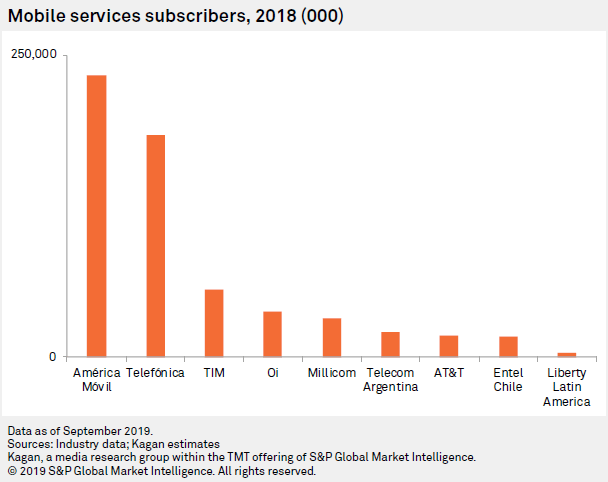 The nine groups generated almost $60 billion in revenues from mobile services in 2018, representing more than half of total service revenues reported by Latin America's top 11 groups. Mobile revenues for the top groups fell by an average 5.1% annually between 2011 and 2018, due to local currency depreciation, as well as regulatory cuts in mobile termination rates and increasing competition, which led to a reduction in prices for mobile voice and data services across the region. Mobile ARPU for the top Latin American groups fell at a CAGR of 7.0% between 2011 and 2018. AT&T saw the largest drop in mobile ARPU, despite subscriber growth in Mexico, the only country where the company operates mobile services in Latin America. 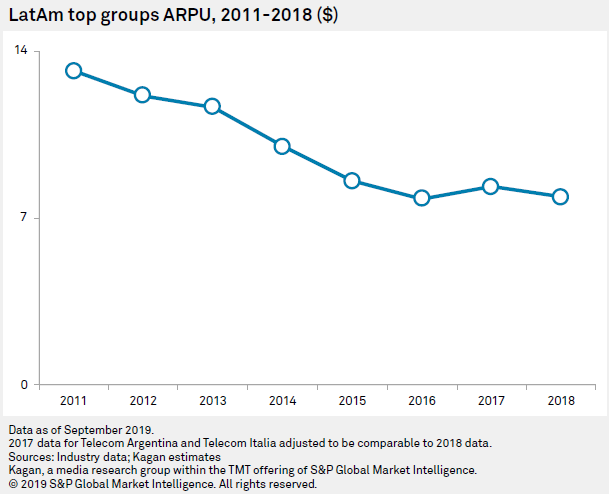 In Colombia, for example, Millicom's TigoUNE, the combined brand of Tigo Colombia and UNE EPM Telecomunicaciones, América Móvil's Claro Colombia, and Telefónica's Telefónica Colombia (branded Movistar) have made unlimited SMS and voice a common add-on for all price points of postpaid plans. Incumbent operators in Chile are competing against WOM SA in offering unlimited data and voice plans, with 720p HD video streaming and high-fidelity audio streaming. In Mexico, Telefónica México S.A. de C.V. will try to grow its 4G subscription base through the introduction of unlimited voice and data plans while AT&T Mexico will look to dent Telcel’s dominance through the acquisition of 80 MHz in the mid-band, as well as offering converged entertainment and data mobile bundles.

Already a client: Access the article here for mobile ARPUs by country and group.

From 2020-2021, regulators in Latin America are supporting the expansion of spectrum inventory in the low and mid-bands with interest leaning on the 700 MHz and the 3.5 GHz bands. In Latin America, total spectrum for the six covered markets of Argentina, Brazil, Chile, Colombia, Mexico and Peru totaled almost 3,000 MHz at the end of 2018.

Already a client: Access the article here for a detailed analysis of spectrum allocation in the region.

Pilots using high band millimeter wave frequencies have also emerged in some markets, such as a test by Telecom Argentina in April 2018, and the launch of commercial 5G FWA services by Uruguay's Antel in May 2019, both over 28 GHz spectrum and deployed in partnership with Nokia. However, the cost associated does not make it appealing for operators in the region, who are still expanding 4G networks.

In Brazil, more than half of mobile subscriptions are 4G LTE. In 2018, TIM Brasil Serviços e Participações S.A. and Nextel Telecomunicações Ltda. funneled portions of their capital expenditures to refarm the mid-band spectrum, specifically the 1.7 GHz and 2.1 GHz bands. In Chile, 96% of 4G subscriptions are smartphones while the remainder combine 4G USB dongles and machine-to-machine connections. Operators were keen to strengthen postpaid plans, offering "unlimited" data and voice plans to capture heavy data users. On the other side of the coin, consumers in Argentina are stifled by a weaker peso. But despite the struggling economy and rising expenses in utility, Argentine operators still aggressively expanded 4G across the country. The newly merged Telecom Personal SA and Nextel Communications Argentina S.R.L. entity increased its 4G LTE footprint in 900 new locations.

Capital expenditures for the nine mobile operators considered in the report declined in 2018. AT&T and Telefónica showed the largest declines, while América Móvil and Liberty Latin America ramped up their investments. Overall, operators focused their spending in 4G network expansion and fiber networks deployment.

Already a client: Access the article here for a detailed analysis of capex trends in the region.

New opportunities will arise in Brazil as the regulator looks to reduce barriers for machine-to-machine connections. Regulator Anatel will also be addressing the country’s spectrum scarcity via a spectrum auction planned for 2020, with frequencies in the 700 MHz, 2.3 GHz, 3.5 GHz and 26 GHz bands up for grabs. The four largest mobile carriers in terms of subscribers ranked as the highest spenders in Brazil in 2018: América Móvil's Claro Brasil, Telefónica's Telefônica Brasil (branded Vivo), Oi and TIM Participações comprised 96% of the country’s total capex spend.

Vivo focused on expanding its 4G network, which covered 88% of total pops by the end of December, as well as its fiber acceleration project, which consumed 500 million reais in capex in 2018 and is expected to double to an annual 1.0 billion reais in 2019 and 2020. TIM financed the deployment of 4G over the 700 MHz band it secured while refarming mid-bands 1.7 GHz and 2.1 GHz, and also the expansion of its fiber broadband networks. Since the approval of a stringent financial debt restructuring plan totaling $20 billion, Oi has been ramping up investments in fiber and 4G LTE in “key clusters and cities” identified as priority areas. To maintain liquidity, the carrier hired Bank of America to assess the feasibility of the sale of noncore assets such as data centers and towers. For Claro, for the full year of 2018, capital expenditures for its mobile business focused on accelerated expansion of its 4G LTE-A and 4.5G LTE-A Pro and enabling the 700MHz band in “key geographic locations.”

For Mexico, about 50,000 more towers are still needed to cover 99% of the population with 4G, despite the aid of its newly lit 700 MHz. Both Telefónica Mexico and AT&T Mexico have separate national roaming agreements with market leader Telcel, so pressure to expand will be dependent on the incumbent and ALTÁN Redes' "Red Compartida," the country’s wholesale 4G network in the 700MHz band.