Summer is here again, vaccines in the US are readily available, and state and local economies are opening up. Using our deep consumer data and our consumer diversity model, we take a moment to look at how consumer spending shifted during the crisis and what the future could hold for this sector in the emerging post-pandemic world.

Out of services, into goods

During the initial wave of lockdowns in 2020, consumer spending plunged nearly across the board. Real (inflation-adjusted) consumer spending on goods fell an unprecedented 13% between February and April, while services spending plunged 20%. But the nature of the pandemic and the business restrictions put in place to contain it meant that in-person service providers remained shut down more often, and for far longer, than businesses selling goods.

As retail establishments pioneered new methods of contactless sales, such as curbside pickup and more, consumers easily transitioned to online shopping. By June 2020, real consumer spending on goods had already surpassed its pre-pandemic peak, and as of April 2021, it was more than 16% above its level in February 2020. Services, however, have not been so lucky. As of this April, real services spending was still nearly 5% in the hole. 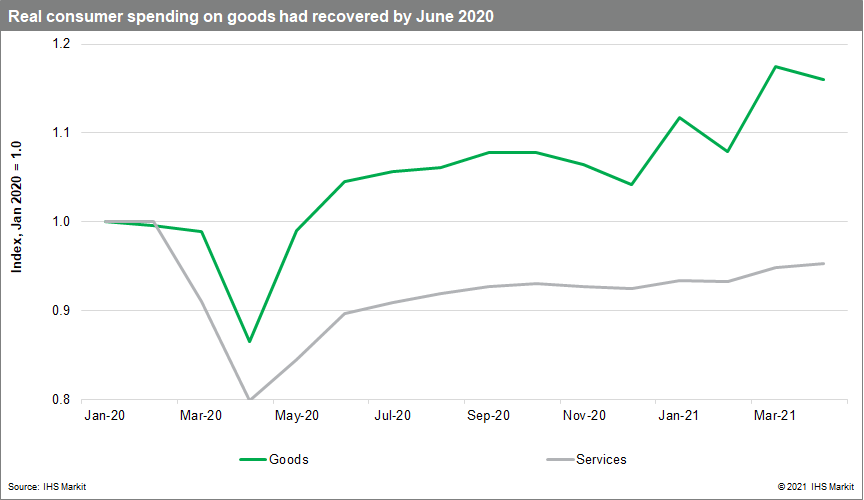 These numbers represent the summed effects of dynamics in many different industries. Here we highlight a few of the segments that have led these trends. 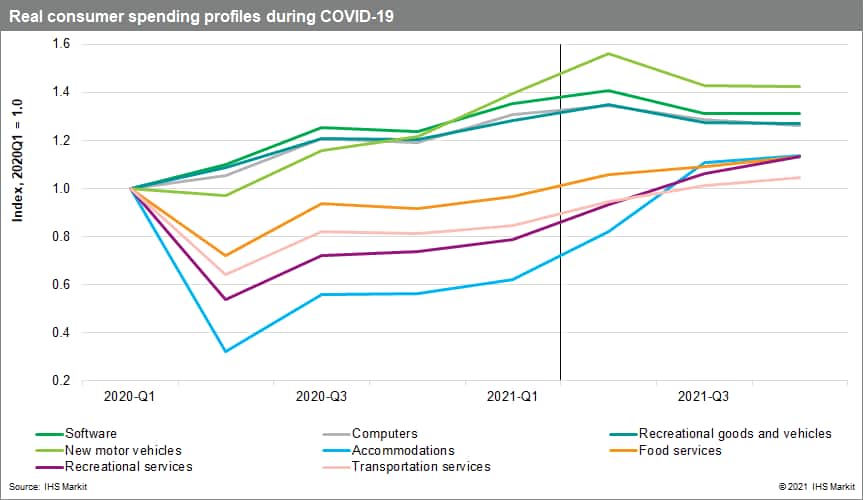 Home offices get a makeover

When offices closed, workers scrambled to outfit their own spaces with the necessary equipment. The result was a bonanza for sellers of furniture and information technology. Real consumer spending on computers in 2020 jumped 19%, while for software, the increase was 26%, the largest gains since 2006 and 2007, respectively.

Survey after survey showed that the majority of respondents hoped to maintain this workspace flexibility going forward. The shift to remote working now looks like it will be one of the most lasting impacts of the pandemic. In our forecast, real spending on computers and software mostly holds on to its gain, remaining at a level far beyond that of 2019.

As jobs moved into the cloud, people moved out of the city. Health concerns and the shift in population out of urban centers during the pandemic left a big mark on the methods people use to get around. As public transportation ridership plunged, motor vehicle sales roared to life. Real consumer spending on new motor vehicles was hobbled initially in 2020 by plant and dealership closures. But it put the pedal to the metal in the third quarter of that year and was pushed into turbo mode by an infusion of stimulus checks. As a result, our latest forecast looks for an increase of nearly 34% in 2021—an all-time record.

Before the pandemic, women's footwear was the top spending category in all Apparel. With more women working from home or even leaving the labor force post-pandemic, we may start to see a shift in the types of apparel that are preferred by female consumers. Among the top five categories in apparel spending - women's footwear, men's footwear, women's tops, women's pant, and jewelry - four are aimed at a population that has experienced a significant change in the last 18 months. It is likely that this shift could even mean a reallocation of funds altogether - perhaps away from footwear and clothing, into the now very favorable category of recreational goods.

The initial declines in spending for the sectors most at risk to social distancing restrictions were truly astronomical. Between the first and second quarters of 2020, real spending on transportation services fell 36%; on recreation services, spending dropped 46%; and on accommodations, spending plunged a whopping 68%. While goods sellers were able to prosper even in the presence of social distancing requirements, these services were at the mercy of the pandemic itself.

There are strong signs of recovery now that the vaccination campaign is paying dividends. High-frequency data show that restaurant activity has nearly fully recovered, movie-theater revenues have jumped in recent weeks, and travel-related indicators are on a broadly firming trend. Putting together this recent progress and our expectation for further re-opening, we expect real spending in each of these at-risk categories to reattain their pre-pandemic levels in the third quarter of this year.

The question remains, though, who will be doing the most spending in recovery? Pre-pandemic, nearly half of all spending on food services (restaurants) was from consumers aged 55 and up. 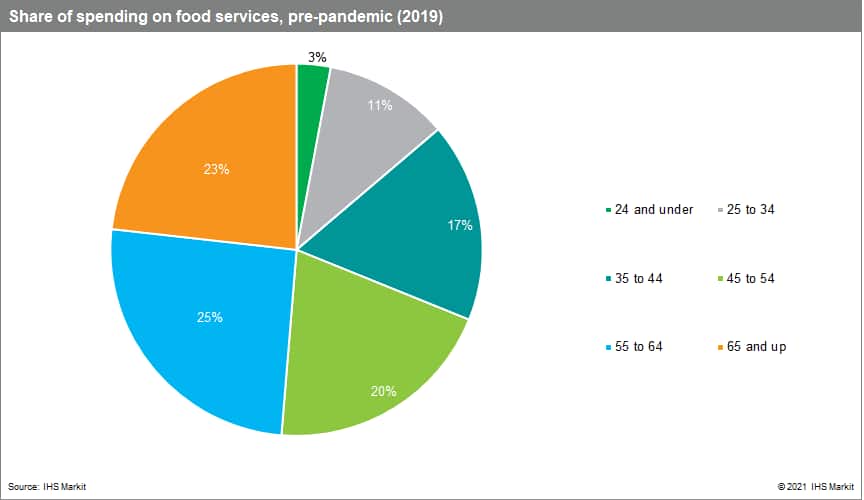 However, post-pandemic life has uncovered a sharp increase in the number of people 65 years and older who are no longer in the labor force. This wave of early retirements and a shift toward working from home among older generations could also bring a shift in the demographics of who is eating out and spending the most, most often.

Now that consumers have new hardware and habits, we expect some of the substitution of services by goods meant to replace them (embodied in the outstanding recent performance of spending on "recreational goods and vehicles") to persist. In addition, while the pandemic is coming under control in the US, it still rages globally, worsened by the proliferation of new variants of the virus. This will necessarily inhibit spending on international travel for quite a while. As a result, we expect the recovery in these categories to be gradual and do not expect services spending to now show the same size of spike that goods saw last year.