It was no surprise that the Bank raised the economic and inflation outlooks. Global real GDP is much stronger than was laid out in the January forecast, particularly in terms of a more solid US growth projection, which is stronger than the April IHS Markit US economic forecast. Plus, the domestic economy proved to be more resilient than the Bank forecast during the pandemic's second wave. Higher estimates of potential output are coming from stronger trend labor productivity projections, with total output growth averaging 1.5% this year from a wide range of estimates, 1.4% next year, 2.0% in 2023, and 2.2% in 2024. The Bank's real GDP projections of 7.0% quarter on quarter at annual rates (q/q) in the first quarter and 3.5% q/q in the second quarter are similar to IHS Markit's April forecast. The more contagious new variants and prolonged and sometimes more severe lockdown measures, despite the increased rollout of vaccines, suggest that the economy will slow in the second quarter, highlighting the healthy dose of uncertainty surrounding the outlook and potential output. It should be noted that the Bank of Canada assumed about $85 billion of federal government stimulus spending in the forecast, which was completed before the release of the budget on 19 April. This has contributed to the stronger growth forecasts compared with IHS Markit's forecast.

Inflation concerns in the MPR are as expected, as temporarily elevated price pressures play out in the near term. 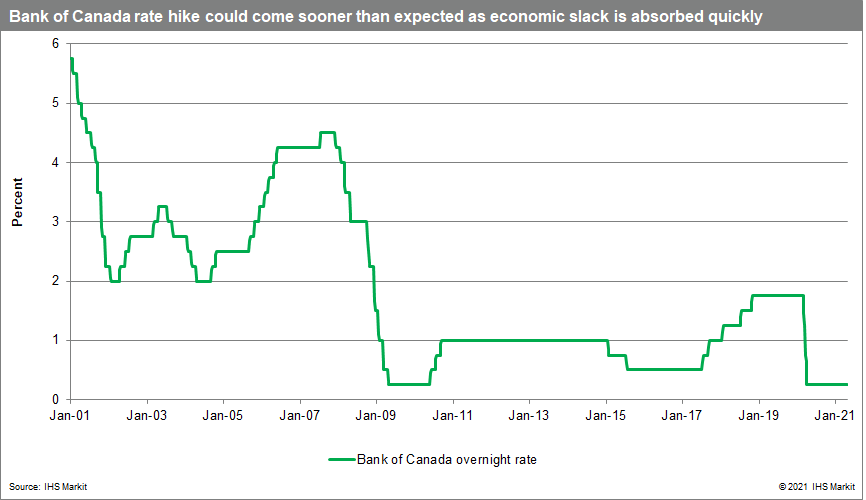 The extraordinary forward guidance changed this month, but the fundamentals remain, with the Bank keeping rates at the effective lower bound until economic capacity is used up and the 2% inflation target is sustainably achieved. New estimates pinpoint this occurring during the second half of next year. This does not necessarily mean that the Bank will begin raising interest rates at this time. Bank of Canada Governor Tiff Macklem will not count the chickens before they hatch, noting in the press conference that the Bank is looking for a full recovery, especially when it comes to pulling the plug on quantitative easing. And, just like previous recoveries, the Bank will focus on labor market conditions before it starts raising interest rates. During the global financial crisis, the Bank was focused on weak youth labor force participation rates. In the April MPR, the Bank rightly states its concern for "low-wage workers, young people, and women. Although recent job numbers have been encouraging, it may take a considerable time for overall employment to recover." The timing of these labor groups' recoveries may not go hand in hand with inflation pressures hitting a sustainable 2% inflation target. April's jobs data are likely to be downbeat given the latest round of extended restrictions. As such, the timing of monetary policy tightening is uncertain and could likely hold off until the first half of 2023, which is currently built into the Canadian macroeconomic forecast.