To maintain comprehensive and accurate databases S&P Global has developed over a period of time a number of key strategic agreements with governmental and inter-governmental organisations. Agreements exist with the International Maritime Organization regarding the issuing of the IMO Ship Number, IMO Company Number and IMO Registered Owner Number. Further information on these numbering schemes, which are managed by S&P Global on behalf of the IMO, can be found below.

In addition to this, S&P Global has recently launched a new, versatile and expandable shiptype coding system. The new system takes coding to a new level of detail and was created to meet the demands of both a changing industry and the requirements of those wishing to perform either aggregated analysis or analysis on individual vessel types. The International Maritime Statistics Forum have given their support to the new system which is now being incorporated into our products. Further information can be found below.

S&P Global is the originating source for the International Maritime Organization (IMO) Ship Number and is the sole authority with responsibility for assigning and validating these numbers. The Numbers are issued from the global maritime databases maintained by S&P Global and consist of a unique seven digit number. S&P Global manages this Scheme on behalf of the IMO.

In the 20 years since the introduction of the Scheme, the IMO Ship Number has become a universal public reference for ships, and continues to be the unique ship identifier adopted in new systems, such as AIS and LRIT. The IMO ship identification number was adopted on the 19th November 1987 in accordance with IMO Resolution A.600(15), by utilising the then existing Lloyds Register Ship Numbering system. The Scheme was made mandatory for all solas vessels under SOLAS regulation XI-1/3.

S&P Global has extended the Scheme on a voluntary basis to include some of the above excluded shiptypes, and in particular fishing vessels and commercial yachts that meet solas requirements.

The number is inserted on Ship's Certificates listed in SOLAS regulation I/12. Under SOLAS regulation XI - 1/3, the IMO Ship Number is required to be permanently and visibly marked on the ship. Furthermore, IMO MSC/Circ.1142 and MEPC/Circ.425 refer to the marking of the ship's plans, manuals and other documents with the IMO Ship Identification Number, recommending that the originator of such plans, manuals and other documents ensure that the IMO Ship Number is marked on them prior to submission for approval by an Administration or a recognised organisation acting on its behalf.

In accordance with IMO Circular Letter 1886/Rev.3, IHSF issues IMO Ship Numbers at the confirmed order stage, and shipbuilders/shipowners are encouraged to provide details of all new orders to S&P Global to facilitate the assignment of the LR/IMO Number at the earliest opportunity which, for the majority of ships, becomes the IMO ship identification number on completion.

The IMO Ship Number is assigned to the total or greater portion of the hull enclosing the machinery space which is the determining factor should additional sections be added.

The IMO number is never reassigned to another vessel.

S&P Global issues IMO Ship Numbers free of charge to shipyards, shipowners/operators, administrations and classification societies on submission of a completed IMO number Request Form, which is available from https://imonumbers.ihs.com. Replies are normally dispatched within a few working days from receipt of each request. S&P Global reserves the right to refuse to assign an IMO Ship Number until all identification criteria have been supplied and to make a charge for processing significant batch requests of numbers.

S&P Global processes IMO Number receipts by strict rotation and it is recommended that applicants should forward requests at their earliest opportunity. Applications involving more than one ship are accepted on a single ship per form basis only.

IMO Ship Numbers can be obtained from S&P Global products and services. The Equasis free public site is also a reliable source to view the IMO Ship Number (www.equasis.org). This site is supplied with up to date fleet and owner information from the databases of S&P Global.

S&P Global is the originating source for the IMO Company and Registered Owner Numbers and is the sole authority with responsibility for assigning and validating these numbers. The Numbers are issued from the global maritime databases maintained by S&P Global and consists of a unique seven digit number. S&P Global manages this Scheme on behalf of the IMO.

The Scheme was introduced in 2004 through the adoption of Resolution MSC.160(78), as a measure to enhance maritime safety, security and environmental protection, and to facilitate the prevention of maritime fraud. The Scheme adopted the then existing S&P Global Fairplay Company Numbering system.

The Scheme becomes mandatory for solas vessels on 1 January 2009 through adoption by Resolution MSC.194(80) of the proposed new SOLAS regulation XI-1/3-1 on the company and registered owner identification number and draft amendments to SOLAS regulation XI-1/5 on the addition of the numbers to the continuous synopsis record (CSR). The Number for Companies will also be added to ISM and ISPS certificates following adoption of resolutions MSC.195(80) and MSC.196(80), respectively.

One number is issued to a company if it undertakes one or both of the following roles:

The Number stays the same when a company changes its name, or if its ships are transferred to another flag. When companies merge, S&P Global will assign the Number of the larger company to the new amalgamated entity, while the Number of the small entity will be frozen and not re-used. The Number remains unchanged, but unused, in the event a company and/or registered owner sells, or otherwise disposes, of its ship(s) and does not begin operating new ship(s). The number will remain unchanged in the event the company and/or registered owner, after having sold or otherwise disposed of its ships, renews ship management at a future date. S&P Global maintains a history of Companies and Registered Owners of ships on its database.

S&P Global adopts a Company Name-style Guide for recording company Names on its database. This is to ensure that the formats of names are consistent with language and character sets used by its software and the software of organisations to which it supplies data. However, for clarification, S&P Global also records the name-style as supplied by administrations for registered owners whose company registration is in the national jurisdiction of the administration. This name-style is supplied as part of the electronic data exchanges between S&P Global Fairplay and Administrations which support the Scheme, formalised in IMO Circular Letter 2554/Rev.1.

IMO Numbers for companies and registered owners can be obtained from S&P Global products and services or can be viewed on the free website https://imonumbers.ihs.com. Numbers for new companies, and amendments to existing companies, can also be requested through this site.

There are multiple different vessel type data coding systems in use today. Of all the systems currently maintained, no one system completely meets the requirements of those wishing to perform aggregated obtain a detailed vessel type descriptor for a particular vessel, i.e. the operational users. Many coding systems are now out of date and too inflexible to meet the ever changing technological face of shipping.

A new coding system is needed

A popular coding system that goes some way to meeting user's requirements today is the Statcode, but it does not go into enough individual vessel detail. Rather than modify four level coding system and to prevent widescale legacy and time-series problems we concluded that an expansion on the existing system was the way forward. We have therefore kept Statcode and introduced a new level, Level 5, which contains more specific vessel type information (view table below).

Key clients and members of the International Maritime Statistics Forum have already lent their support to the new system. It is already being incorporated into our products and all new data production requests are being supplied as Statcode 5 compliant.

The existing Statcode takes users to Level 4. Below is an example of the new level 5 (items in red are additions): 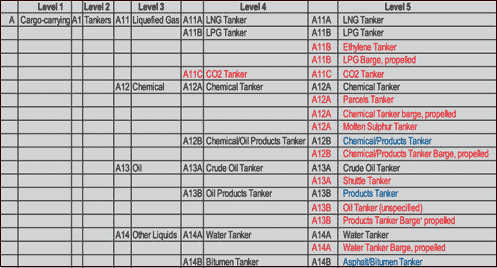 The new Level 5 is in synergy with the previous Level codes and provides extra functionality. Some cargo vessel types span more than one category so grouping these brings benefit to the analytical user. We have introduced a digit reference for hull shape and a two alpha reference to help identify vessels involved in the carriage of particular cargo or are defined in some way by their operation.

For example, the first digit of Level 5 relates to hull structure, eg:

The second alpha digit is an individual identifier:

In order to pull out all vessels with the common characteristic of being able to carry cement you would previously had needed to combine several searches across all levels. Now you need only to select any codes with the ending BT and all such vessels will immediately be returned. If you wanted to search for all barges across all kinds of vessel types you would just need to perform a search on hull shape '5'.

The new system is flexible and adaptable. It is designed to meet the needs of a changing maritime industry and to evolve with it.

It is designed to meet the needs of a changing maritime industry and to evolve with it.

Learn More About Our Customer's Success