The COVID-19 crisis has exacerbated concerns across the lithium-ion battery industry about China’s dominance of the supply chain. The pandemic has also highlighted the need for local supply chains, in order to improve sustainability and work towards net zero targets.

Despite some momentum, however, the development of regional supply chains still faces challenges that go beyond simply raising equity.

Although there has been controversy about Chinese dominance, other regions such as South America and Australia are significantly more important than China in the lithium raw materials mining and extraction process. But it is evident that the vast majority of the downstream value-add activities are performed in China, largely due to an abundance of cheap energy and forward planning.

This is a consequence of the Chinese government’s early push towards electrification, especially through subsidizing electric vehicles (EVs). The country currently accounts for more than half of global EV sales. This emergence of demand incentivized the development of the industry around it, combined with an important financial push from the Chinese government.

As it becomes increasingly clear that the electrification trend will not reverse, the Western Hemisphere has been trying to catch up. In the case of the US, one of the main challenges to reducing the gap is the lack of a government-run, one-direction plan, which is exactly what allowed China to take the lead, according to Emily Hersh, managing partner at consultancy, DCDB.

“The successful approach in the US would be for governors who have slightly different capital situations going on to take the lead and work with each other regionally.”

The US concerns about the importance of lithium and other minerals date from 2017, when the Trump administration signed an executive order to “ensure secure and reliable supplies of critical minerals.” A list of 35 minerals – including not only niche products such as lithium and rare earths, but also more common ones like bauxite and tin – was released one year later.

However, in practice little has changed so far. “Take rare earths for example, what is mined in the US has to go to China for processing,” Hersh said.

In November last year, the US signed a cooperation agreement with Australia on critical minerals. The countries’ export finance agencies agreed to work together to fund new projects and diminish China’s dominance, but no investments have been announced so far.

Europe, on the other hand, seems to be ahead of the US in the race. Despite also being far behind China in the development of regional lithium supply chains, Europe has been attracting more investments than the Asian country since last year (see infographic). 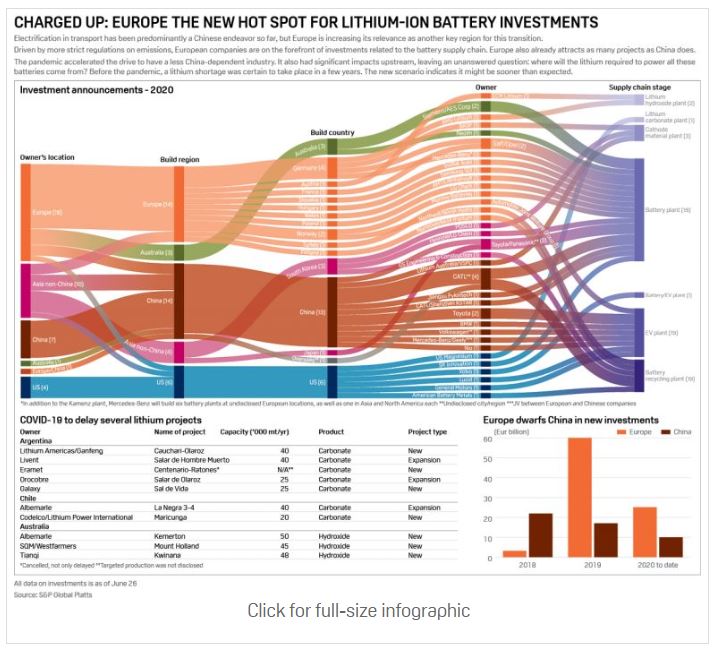 The European Battery Alliance was established in 2017 to help create a competitive manufacturing chain in Europe.

“This has, however, changed dramatically even before the coronavirus [pandemic] and in the annual survey of the most attractive regions for mining globally by the Fraser Institute, they conclude that there has been a spectacular change in the top,” he said.

According to the Fraser Institute’s Investment Attractiveness Index 2019, Europe was the most attractive region in the world for mining investment in 2019, with Finland coming in as the second best jurisdiction in the world for investment, after ranking 17th in 2018. Portugal came in fifth, up from number 46 in 2018, while the Republic of Ireland and Sweden also made the top 10.

Normark said the main challenge now was for countries and companies to deliver on the expectations created for the mining industry.

“Another challenge is finding competent people since the mining industry has been less attractive in Europe for many decades,” he said.

He added that it was well known that there are sufficient lithium deposits in Europe to meet the continent’s entire long-term requirements.

“This will not be done overnight, but a realistic plan is that Europe in the timeframe of 2025-2030 could become self-supplied in lithium. This is important since all projections today are pointing towards lithium being used not only in today’s batteries, but also in the next generation of batteries,” Normark said.

He noted that from a purely commercial standpoint, the formation of a more global battery supply chain would allow the European battery industry to find the lowest-cost options for extracting the materials it needs, while also contributing to the competitiveness of the industry.

“Industrial development, investment and jobs are naturally important elements for distribution of global wealth. With this also comes, if done right, [the opportunity] to spread high environmental and ethical standards to developing countries,” he said.

But there are some disadvantages, Normark said, noting that there could be supply risks from instability arising for various reasons, while it also makes it more difficult to implement and guarantee the highest ethical and environmental standards.

“Another disadvantage is that the fast development of the battery industry has proven to be closely linked to building strategic cooperation along the battery value chain and this can become less efficient. Currently the battery material supply chains create a lot of transportation that can be avoided with local sourcing from Europe,” he said.

“Creating jobs in Europe in combination with the electrification of transportation is an important element to create public acceptance. If jobs are lost and not new created it could slow down the transformation,” Normark added.

Britishvolt recently expressed interest in building the UK’s first EV battery gigafactory. The preferred location is in Wales, where it could eventually lead to creation of more than 4,000 jobs.

Sheldon has nearly 20 years of experience in the space, ranging from roles at Johnson Matthey, Cummings and the UK Battery Industrialisation Centre, as well as previously running her own successful battery-focused business.

She said that Brexit and the pandemic offer favorable opportunities to the development and rollout of Britishvolt.

“Local supply chains are as important to business as they are to the environment,” she added.

Sheldon said materials such as the cathode (high nickel-based cathode materials), a significant part of next generation EV batteries, need to be protected from moisture.  Long transit times from places with hot climates could be detrimental to the product before it is even placed into a battery cell.

This means local refining is essential. One big concern for consumers is the range of an EV, and the better the material is processed and constructed, the better the longevity of the battery pack.

The UK domestic battery industry is forecast to be worth GBP5 billion ($6.3 billion)  by 2025, and demand for lithium ion cells across a number of industries, including vehicle electrification, is already increasing dramatically.

“In light of recent events [the coronavirus pandemic], it is clear that moving from a global to [a more] regional market [is] key for industrial players and policy makers,” Vincent Ledoux Pedailles, executive director at Infinity Lithium, told S&P Global Platts. “The [pandemic] will accentuate even more the need to develop an integrated and local EV supply chain in Europe, with direct access to lithium.”

Is it possible to bypass China?

Despite all the efforts from other regions, especially Europe and the US, China is expected to remain an important participant in the lithium-ion supply chain — and is even more crucial for those towards the upstream side of the industry.

“It is generally more economically attractive to place [lithium] converting assets either near the resource or in regions that can easily serve energy storage device manufacturing centers like China, Japan and [South] Korea,” said Eric Norris, president for lithium at US-based chemicals company Albemarle, stressing that China continues to be an important country for the company.

“As such, we will have, and will plan to have going forward, ample conversion capacity in China to serve that market, as well as capacity outside of China to address the globalization of the industry,” he added.

Norris said Albemarle chooses the location of its conversion plants based on the proximity to the lithium resource, overall capex requirements, operating costs, logistics of shipping raw material or finished goods, permitting, and proximity to customers.

Going downstream, China’s relevance as the biggest EV consumer market is still to be challenged, which should keep feeding the local industry with further investments. Since the beginning of the year, at least two major Western automakers announced significant milestones in China: US-based Tesla started up its Shanghai gigafactory, while Germany’s Volkswagen invested Eur2.1 billion to acquire stakes in battery maker Guoxuan High-tech Company and auto manufacturer JAC Motors.