It seems that almost every other vehicle on the road these days is a small utility vehicle. In fact, this category comprises two distinct sets of light trucks, one that is thriving and one that is holding on for dear life.

Compact non-premium crossovers (CUVs), those vehicles using a unibody, car-like architecture, offer the compelling combination of a car-like ride, superior fuel economy, competitive pricing and SUV-like utility. With this combination of features, the small crossover share of the retail new vehicle market has almost doubled to 11.2% through the first six months of this year from 6% in 2005. Excluding the luxury market, small crossovers now account for almost 13% of the market. They also account for more than a third of all utility registrations, including all sizes, architectures and brands. Small non-premium crossover retail registrations (June 2010 YTD) are up 26% year-over-year, substantially above the industry increase of 10%. Almost every make now offers a small crossover - there are now eighteen models on the market versus fourteen just five years ago.

In contrast, small utilities using a traditional body-on-frame design, which is common among pickups and large SUVs, currently account for only 1.99% of the industry, and they make up just 15% of all non-premium compact utility registrations. There are only five truck-based small utilities, less than a third the crossover model count. Truck-based small utility registrations (June 2010 YTD) are just 84,871, down 8% year-over-year.

Several makes have benefited from this surge in small crossover market share. The Honda CR-V, Toyota RAV4 and Subaru Forester are the most popular light trucks for their respective brands, and, not coincidentally, these three models were the original small crossovers, introduced in the 1990s. The Escape is Ford's number two light truck, and had the domestic compact crossover space to itself for several years before the launch of the four-cylinder Equinox and others. Lastly, the recent launch of the GMC Terrain has helped stabilize the share of both GMC and its parent company.

On the other hand, neither Dodge nor Chrysler has yet launched a small crossover, leaving a substantial hole in their product portfolios. And Nissan came to the party late, launching the Rogue in 2007, years after its Japanese rivals. 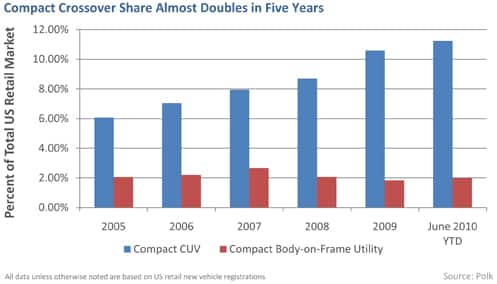 @SPGMobility forecasts Nov US auto sales to reach 1.122m units, a 14.1m-unit SAAR. Not as strong as October, but in… https://t.co/5htJ7SFNvQ