Magnesium shortage in context: A real threat or just a price spike?

(This is an executive summary. The full report can be found on AutoTechInsight. See links below.)

As the automotive sector struggles to sustain production in light of semiconductor shortages, new concerns emerge around the stability of the supply for magnesium, which is key to aluminum production and is heavily sourced from Mainland China. The price of the raw material has recorded a three-fold increase when compared to pre-pandemic levels, further corroborating shortage concerns in the industry.

The issue has been raised at the governmental level at a recent EU Council held one week ago as it could have "far-reaching ramifications on entire European Union value chains". There is little doubt that a prolonged shortage of magnesium could have a devastating impact on vehicle and components production. This article analyzes why this has become an issue and whether it will trickle down to vehicle and component production.

Magnesium is considered the lightest material among all commonly used ones for structural applications. It is roughly one-third lighter than aluminum. It has also the property of bonding with other elements easily, which makes it difficult to find magnesium in its pure form. Automotive applications of magnesium started from racing cars, adopting the material in some components as early as the 1920s. The adoption of the material in light vehicles started with commercial vehicles.

The majority of this material is produced from natural minerals such as dolomite and magnesite and it is extracted typically through two processes, both needing high energy levels and producing high emissions levels: pidgeon process and electrolysis process (mainly used in the United States), one respectively starting from the dolomite mineral, the latter from magnesium chloride.

Aluminum alloys are highly recycled within the automotive value chain, so specific attention should be paid to market demand increases for wrought alloys, which burden the minerals supply chain with additional raw materials. For the automotive value chain, an extensive amount of wrought alloy demand comes from aluminum sheets used in body construction.

Is there a shortage?

The origins of the concerns are to be found in Mainland China, which in 2020, accounted for 85% of global output of magnesium metal, in particular in the Shaanxi Province, which accounted for 63.5% of total production output with its 0.61 million metric tons. Magnesium producers in Shaanxi Province are dealing with high coal and electricity prices, and stricter "dual control" of energy consumption.

To further cut 2% of energy consumption in per capita GDP growth in the third quarter, and 3.2% in the whole year 2021, Shaanxi's Yulin city urged industrial facilities, including magnesium plants, which are categorized as high-emission units, to either completely shut down or run at 50% of production capacity in the last two weeks of the third quarter. Most magnesium plants have resumed operations since early October, but they are being asked to run at about 40% of capacity until the end of this calendar year.

This has sparked concerns, particularly in the automotive industry about an imminent shortage of material. John Mothersole, economics director at IHS Markit in the Price and Purchasing division, clarified that there is no certainty about the imminent shortage, but markets are reacting to the scale of production cuts in Mainland China and comparatively low inventory coming into the fall. "The fear that if this lasts for a few months will result into a material shortage is well placed," Mothersole explained.

There are indications that the mandated cuts in production imposed in China may soon be relaxed, perhaps as early as November. Chinese authorities have intervened in both coal and electricity markets in an attempt to alleviate the crisis. If the electricity supply begins to improve, it is likely that those mandated production cuts will be relaxed.

To date, no shortages of aluminum have been reported. 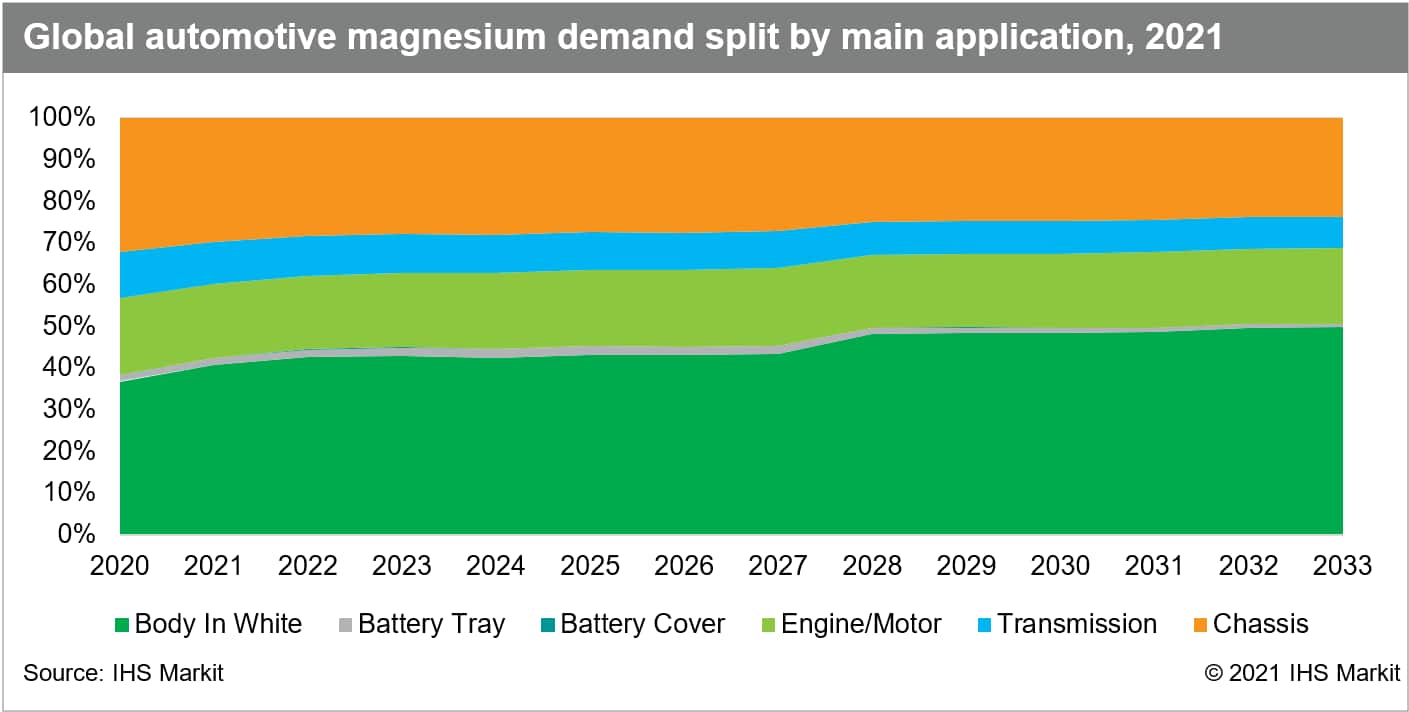 The current energy market within Shaanxi Province and guidance provided by Yulin city officials is the determining factor for both the near-term and long-term direction of the magnesium market. The duration of production limits, as constrained by province-level grid energy demand, will become a key metric to monitor to understand pricing and supply availability of magnesium. Most plants within this province will run at 40% production capacity until the end of 2021.

Beyond the immediate next quarter of magnesium production, energy capacity investments within Shaanxi Province, relaxations in energy cuts, or changes in prioritization of energy restrictions will establish market direction for both the availability of magnesium as well as the cost basis of production. While relaxations in policy may alleviate the supply chain bottleneck of this material, the energy-intensive nature of magnesium production will not be impacted within a mid to long-term period. Substantial research and development is required for any material production to reduce energy requirements. Beyond this, there is not a clear pathway to adjust for the fact that Shaanxi Province is responsible for producing nearly 54% of the global magnesium supply.

In a worst-case scenario, extended production cuts will lead inevitably to a material shortage, as capacity outside of Greater China will not be able to make up for the shortfall in global supply. In this situation, we could see a cascade effect on the aluminum sector, although aluminum prices seem stable so far. IHS Markit, to date, does not have any confirmations about this happening, nor that the aluminum producers are concerned about this magnesium situation.

The automotive industry remains concerned about this situation, with the immediate impact of substantial input cost increases as an ominous signal that shortage is imminent. The next two months will be crucial to understand whether this will result in a journey similar to what was observed with the semiconductor shortage or is an overreaction in the metals market. In the meantime, long-term risks about supply should also be in focus.

A recent study by the US Department of Defense identified magnesium as one of the key strategic minerals for the country. Such over-reliance on China might not bode well in the context of the economic decoupling the United States is pursuing or Europe's "strategic autonomy" policy. In this context, it would be wise for OEMs and suppliers to explore some pathways to alleviate their exposure to magnesium-intensive alloys in the longer run.

Enjoy a live demo of AutoTechInsight