Butadiene and synthetic rubber demand are driven by the tire and automotive industry. While tires, by far, account for the largest finished-goods consumption of butadiene, other significant end uses include belts, hoses, and gaskets. Tire demand is divided into two segments, original equipment (OE) and replacement (RE). The OE segment is driven by automotive production, while the RE segment is driven by the number of cars on the road and miles driven by these cars. Globally, OE accounts for roughly 25% of the market and the RE segment accounts for the rest. However, the OE and RE shares are different, with developed countries having higher RE shares while developing countries have higher OE shares. OE segment demand has a very close relationship with automotive production because OE tire demand is driven by the number of new vehicles produced. In this focus, we will look at the automotive industry outlook in 2021 after the sharp decline due to COVID-19 last year. 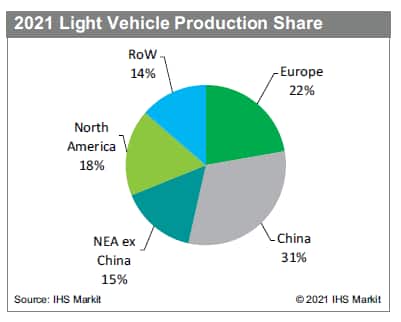 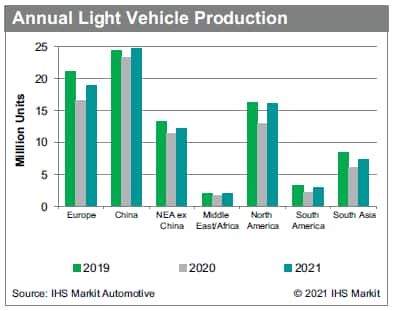 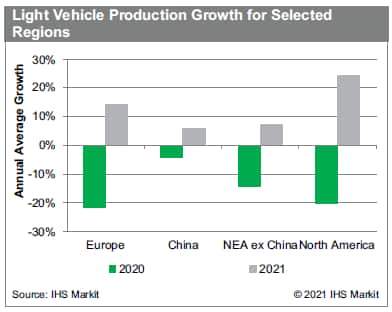 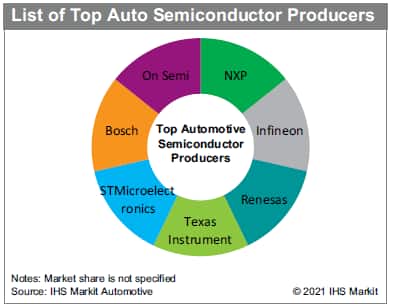 Although major semiconductor suppliers, such as Taiwan-based Taiwan Semiconductor Manufacturing Company (TSMC) and United Microelectronics Corporation (UMC), have announced investment plans to increase production capacities, these efforts will not bear fruit over the short term and will force automotive OEMs and their tier-1 chip suppliers to reformulate their conventional semiconductor sourcing strategies. The crisis has highlighted that the traditional short-term sourcing cycle that automotive companies have pursued may not bode well with production and scale cycles that the consumer electronics sector commands to semiconductor manufacturers. Other major semiconductor manufacturers such as Intel, Samsung, and Qualcomm produce semiconductors for personal electronics, memory, and others. Semiconductors used for the automotive industry and electronics or memory have different properties. Unlike semiconductors for electronics or memory, automotive semiconductor require longer durability and the ability to withstand extreme weather conditions. The growth of electric vehicles (EVs) is driving the increasing need for semiconductors in the automobile industry, given that EV systems require considerably more semiconductor content than conventional propulsion systems. These hybrid and fully electric vehicles often are equipped with more advanced driver assistance systems (ADAS) and infotainment features. These advanced entertainment systems, digital clusters, heads-up displays (HUDs), safety features, and ADAS technologies require systems-on-chip (SoCs) designs that need highly advanced process nodes and that are likely to put added pressure on the already-constrained foundries. IHS Markit Automotive expects the shortage to last until the third quarter of 2021, when reallocation of capacity from semiconductor foundries and possibly some cooling-off of consumer electronics demand should provide greater supply security.

Conclusion
Although the automotive industry is facing some headwinds owing to the semiconductor shortage, which is expected to be resolved by third quarter 2021, industry outlook is optimistic this year. Automotive production growth is expected to be around 13% this year, led by mainland China followed by Europe, North America, and other parts of Northeast Asia. Vehicle production from rest of the other region is also expected to grow sharply this year. Demand for synthetic and natural rubber is expected to increase as strong growth is expected from automotive and tire industry, along with increased demand from the replacement tire sector as vaccinations have started and improving mobility indicators around the globe.

Have questions about the Chemicals industry?