Analog chips – poised to become the next big threat to automakers?

The capacity for analog chips is expected to grow, but it is unlikely to be sufficient to meet the increased demand for chips in cars; therefore, the supply may tighten again around the end of 2023.

The automotive semiconductor supply tightness will likely ease in 2022 and in the first half of 2023. However, there is a risk of pressure points building up again at the end of 2023 or early 2024. According to IHS Markit's analysis, new concerns are emerging over the supply of analog chips. After microcontrollers (MCU) in 2021, analog chips are likely to become the main constraint for vehicle production for the next three years.

The two major chip categories that have been most affected by shortages are MCUs and analog chips. Earlier in 2021, MCUs received all the attention. The proprietary nature of MCUs made it virtually impossible to have dual sources of MCUs for an electronic control unit (ECU) because of software and pinout differences at a minimum. MCUs are manufactured on process nodes typically above 40 nanometers (nm), with some of them now starting to be processed at 28 nm. As memory and system-on-chips (SoCs) have captured more of the semiconductor market share, investment has been concentrated more on the advanced nodes to support growth in those areas and less has been focused on mature process nodes.

There is an ongoing trend toward centralization of the electrical/electronic (E/E) architecture, and it would result in a smaller number of MCUs per vehicle. However, migrating to new architectures and smaller process nodes is not beneficial for all types of chips. For example, demand for analog chips will continue to increase independently of new E/E architectures since they are an essential part of many vehicle systems. Hundreds of analog chips are required per car. All the following require analog chips: power management of every ECU and SoC, signal conditioning for sensors, bus transceivers for every ECU, drivers for each electric motor (up to 100 in luxury cars), LED lamps, displays, radar transceivers, high-end audio systems, and radio frequency (RF) front ends.

Now that the supply of MCUs is in a better shape, analog chip supply is emerging as an issue. Analog chips typically use mature chip processes, e.g., 90 nm to 300 nm. There are technical and commercial reasons why these will continue to be produced at mature progress nodes and not at leading-edge process nodes. Unfortunately, the demand for analog chips is also increasing for mobile phones—for the RF front-end, the sensor processing, the high-end audio, and the contactless payment, to name a few. Considering the growth in vehicle segments and propulsion mix, the average number of analog chips per car is expected to increase by 26% in 2023 compared with 2021. This growth can be mainly attributed to the ongoing electrification trend.

There is a front-end capacity deficit for mature process nodes as most of the investment goes toward more advanced nodes. According to our analysis, out of the total capital expenditure announced in 2021 and 2022, 86% is directed at advanced technologies requiring just a few chips in the car, while only 12% is for the mature process, which is used to produce more than 90% of the chips in the car. With the increase in demand for analog chips, irrespective of the change in E/E architectures, this imbalance in announced capital expenditure could cause future bottlenecks for analog chips and other legacy nodes.

The expected shortage in analog chip supply will have a negative impact on light vehicle production. However, in an optimistic scenario, a decline in demand for analog chips by other industries could result in an improved foundry capacity allocation for the automotive industry. Under this scenario, it is also assumed that the output of analog fabs will continue to increase at a similar pace in the first quarter of 2022 through the third quarter of 2022 before slowing down. In such a scenario, analog chip production capacity added per quarter will peak by the fourth quarter of 2023. 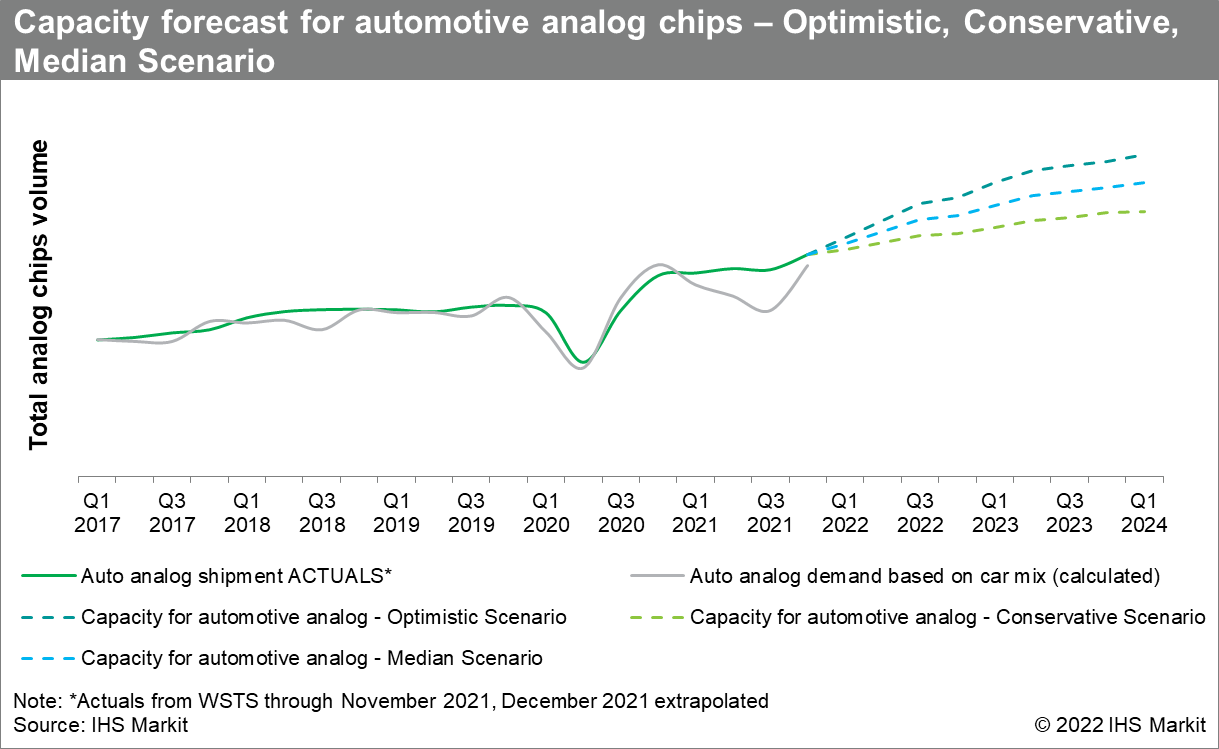 Steady demand for analog chips from other industries could stabilize the capacity allocation for the automotive industry. This is considered a conservative scenario. This scenario also anticipates the output of analog fabs to increase at a normal pace from early 2022. The amount of analog production capacity added per quarter will flatten by second-quarter 2023. In the median scenario, the estimated year-on-year increase in analog chip production will be 18% in 2022 and 13% in 2023.

To analyze the impact on car production, this capacity is converted into the maximum number of cars that could be built in 2022 and 2023. This shows a potential ceiling for car production of around 24 million units per quarter from the third quarter of 2022 onward and a decline in car production from the end of 2023 to early 2024. Predominantly, this can be attributed to the expected growth in the number of chips per vehicle in the next few years. In comparison with 2021, the average number of analog chips per car is going to be much higher in 2023. The available extra capacity is insufficient to meet the fast increase of analog chips in cars, driven by ongoing trends such as electrification and a higher number of infotainment and advanced driver-assistance systems (ADAS) features.

The semiconductor chip capacity will grow, but hardly fast enough to meet the increased demand for analog chips in cars. After MCUs in 2021, analog chips are likely to become the main constraint for vehicle production in the next three years. The number of analog chips per car increases faster than MCUs irrespective of propulsion type, sales segment, and E/E architecture. These analog chips are also in high demand in many other industries such as the smartphone and consumer electronics industries.

Current capital expenditure and capacity trajectory show that situations might improve for the automotive industry in 2022 and early 2023. A supply tightness may be formed toward the end of 2023 or early 2024. This is dependent upon several parameters, such as capacity growth for mature nodes, the analog fab capacity allocation for the automotive industry, and demand for analog chips by other industries. In the coming years, considering the efforts by various players in the automotive ecosystem, there could be more investments for the expansion of analog capacity to lift the potential ceiling for car production. Automakers are working on establishing better visibility to the semiconductor supply chain by forming more direct relationships with foundries. This could result in improved capacity allocation for the automotive industry and improved vehicle production capacity in 2023 and beyond.

Read more articles like this one. Subscribe to AutoTechInsight.
AutoTechInsight provides a wealth of original thought leadership, data, and analysis on a broad spectrum of automotive industry topics and sectors. Visit AutoTechInsight to view all our offerings.

Catch the on-demand session to hear an update on the supply chain crisis situation.
Watch Now
Subscribe to RSS Feed