What is the U.S. video subscription market?

Paying for TV programming was a novel concept in 1969 when analyst Paul Kagan wrote his first newsletter about the future of HBO in Los Angeles, the country’s first cable TV market.

At the time, American TV was free to view and ad-supported. Naysayers doubted anybody would pay for something that was already free. But now, most occupied U.S. households pay monthly for a video service. Decades of industry studies under Kagan formed the foundation for the telecommunications and media research provided by S&P Global Market Intelligence.

The subscription video market in the U.S. generated $121 billion in 2021, with 75% coming from traditional multichannel cable packages and 25% from streaming services.

However, that mix is rapidly shifting, with more households cutting the cable cord and more media owners incorporating streaming models. By 2025, streaming services are projected to control about 40% of total U.S. subscription video revenues.

Comcast and Charter ranked as the sixth- and seventh-largest video subscription businesses in the U.S. as of the first quarter of 2022, as Netflix, Disney+, Warner Bros. Discovery+, and other subscription-based video-on-demand (VOD) services have sprinted past them. 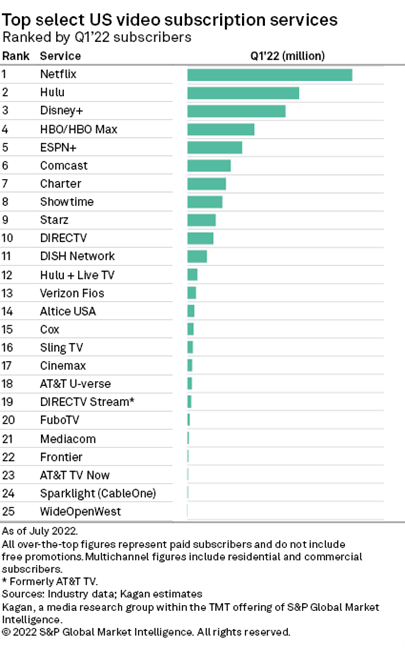 How has Netflix changed TV streaming?

In the early 2000s, the honeymoon with cable network packages began to wane. Consumers complained about paying for 200 channels when they only watched five.

The primary delivery medium for the streaming boom has also blossomed, with U.S. broadband homes growing from 61.2 million in 2007 to over 122 million in 2022. 5G rollouts are paving another path to streaming. A rejuvenated, fixed wireless market doubled its subscriber base in 12 months to top more than 4 million U.S. subscribers in the summer of 2022.

From the launch of Netflix streaming in 2007 through the end of 2022, we estimate 32.9 million U.S. homes will have cut the traditional multichannel video cord (cable, telco, and satellite), taking the industry from 92.7 million to 59.8 million.

The pace of cord cutting has picked up post shelter-in-place. Cable operators lost a record number of video subs in the first quarter of 2022. 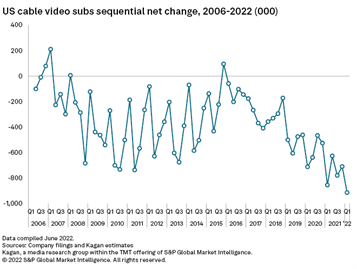 We expect cord-cutting to continue. Our forecast assumes homes using online video only (e.g., using Netflix, Disney+, and other video-on-demand streaming services) could overtake traditional multichannel in the next few years. 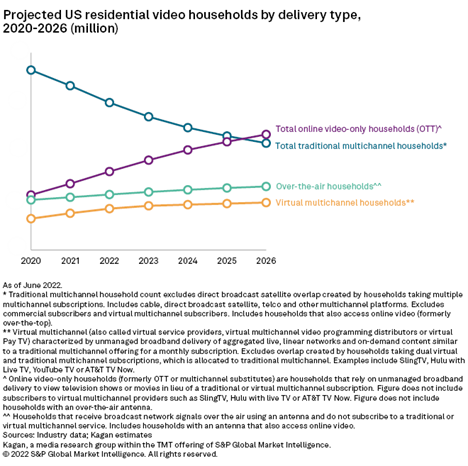 What are the reasons viewers are switching to video streaming apps?

With better streaming content and more digital sports, even higher-income viewers are using the scissors.

This may help explain why traditional multichannel cord-cutters surveyed increasingly indicate that streaming and/or a combination of streaming and over-the-air, or OTA, suffice to satisfy their entertainment needs.

For instance, while 36% of cord-cutters said streaming and/or OTA were good enough substitutes to cut the cord in 2017, in 2022, that figure grew to 42% of cord-cutting respondents. 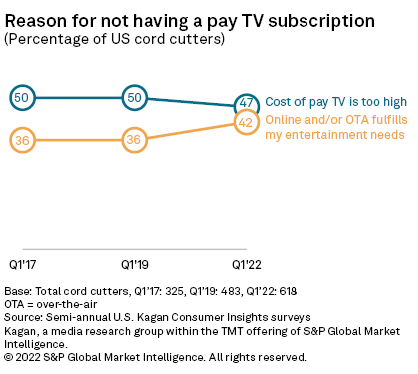 What are the demographics of viewers switching to TV streaming apps?

Despite cost being the primary cord-cutting driver, higher-income homes are increasingly cutting the cord. For instance, while only 17% of homes earning $100,000 and above annually cut the cord in 2017, in 2022, the figure grew to 24%.

In addition, our spring 2022 survey found younger audiences to be cutting the cord more than usual.

More high-quality streaming options and digital sports are only adding fuel to the cord-cutting fire, contributing to our expectations for the trend to continue over the next several years.

With the subscription video market in flux, viewers are comfortable finding their favorite show wherever it resides. Increasingly, that content, even sports, is being served by the combination of streaming technology and a broadband pipe, not by traditional cable or rabbit ears.

What has happened to traditional sports broadcasting?

Live sports events attract large audiences. Super Bowls have generated record audiences for years. Yet while live sports are often touted as the savior for traditional multichannel bundles, the whole story is complex and changing as quickly as the business model.

But sports rights are going digital from regional sports networks (RSN) to large streaming-only companies, even for America’s coveted football and baseball games.

* In 2021, Amazon.com Inc.’s Amazon Prime Video acquired exclusive rights to all Thursday NFL games for the next decade for an average of $1.1 billion per season. 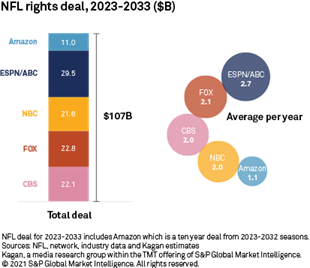 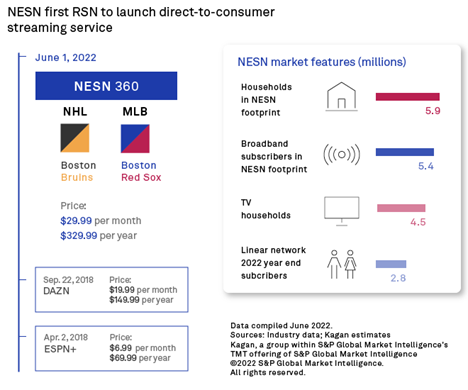 * Some NBA games could be coming to HBO Max as well.

According to our annual Consumer Insights surveys of about 2,500 online U.S. adults from 2018 through 2022, on average, 39% of survey takers watch a game in real-time weekly.

But viewers have more options than ever to watch live games outside the traditional bundle. Contracts are coming up for the NBA (2024), NHL (2027), and MLB (2028), and streaming will probably play a leading role in the renewals.