US midterms 2022: Altering the energy landscape through ballot initiatives


US midterms 2022: Altering the energy landscape through ballot initiatives

This year, voters in a handful of states will decide the fate of several energy-specific and non-energy-specific ballot measures that could affect the energy industry, directly or indirectly, in the short- and long-term.

Ballot measures and initiatives allow for direct electorate participation in the lawmaking process, sometimes without the support of the governor or the state legislature. In some instances, citizens are able to bypass traditional avenues of lawmaking and place proposed statutes, constitutional amendments and referendums on the ballot. Certain states that allow for citizen-initiated ballot measures have restrictions in place on whether an initiative can be repealed or modified by the state legislature.

In the context of energy, ballot measures over the years have focused on issues such as renewable energy access, permitting regulations, climate change mitigation and electric vehicles. Two of three energy-related ballot measures this year pertain to climate mitigation issues. Non-energy-specific ballot initiatives concern a range of topics, such as constitutional conventions, term limits for select offices and modifying the length of a legislative session.

For a more detailed analysis of the gubernatorial candidates and their stances on energy issues, refer to Regulatory Research Associates' topical special report "General Elections: A deep dive into the 2022 state-level midterm elections." 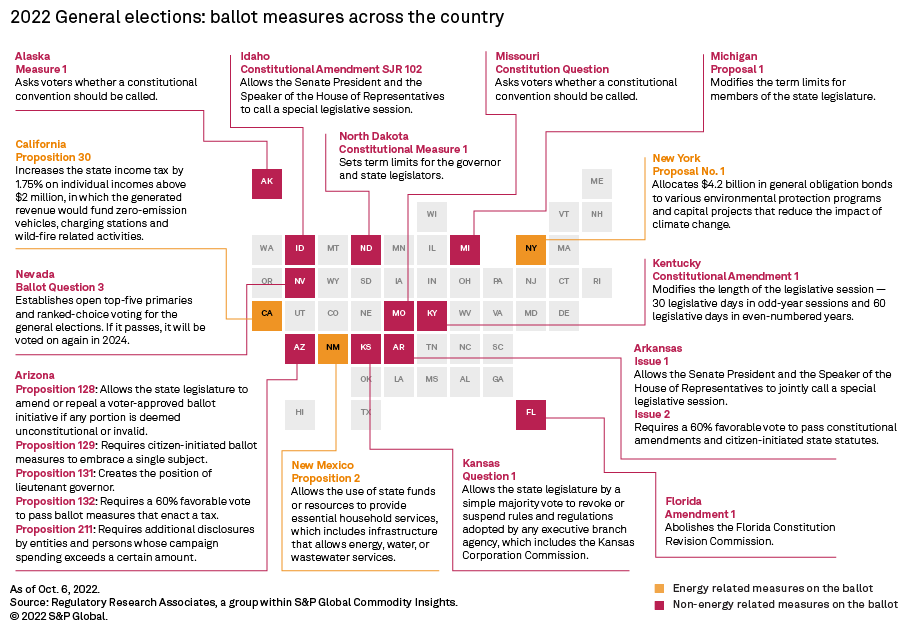 California voters will decide on Proposition 30, which would raise the state income tax by 1.75% on the share of individual income above $2 million, effective Jan. 1, 2023.

The extra revenue generated by the tax would be appropriated for the Clean Cars and Clean Air Trust Fund. From there, the revenues would be allocated 35% to the Zero-Emission Vehicle Infrastructure Investment Plan Sub-Fund, 45% to the Zero-Emission Vehicle and Clean Mobility Sub-Fund and 20% to the Wildfire Green House Gas Emissions Reduction Sub-Fund. The monies would be used to support zero-emission vehicle subsidies and charging stations as well as wildfire suppression and prevention programs.

If the measure passes, the state's annual tax revenue is estimated to increase between $3 billion and $4.5 billion.

While Gov. Gavin Newsom, a Democrat, issued an executive order requiring all passenger vehicle sales by 2035 to be zero-emissions, he has announced his opposition to the measure. The governor said the measure is "a special interest carve-out — a cynical scheme devised by a single corporation to funnel state income tax revenue to their company. ... Californians should know that just this year our state committed $10 billion for electric vehicles and their infrastructure."

The bulk of donations to the Yes On 30: Clean Air California campaign came primarily from Lyft, a ride-hailing company that has contributed roughly $15.1 million to the initiative. In May 2021, the California Air Resources Board approved a clean miles standard requiring California Uber and Lyft drivers to log 90% of California miles in electric vehicles by 2030. Additionally, in 2020, Lyft announced a companywide goal of achieving 100% electric vehicles in its fleet by 2030 while acknowledging that cooperative action is needed among industry, government entities and nonprofit organizations to overcome the up-front vehicle cost and access to reliable, affordable charging.

Voters will decide on a legislatively referred constitutional amendment that amends the "anti-donation clause" of the New Mexico Constitution. The new section would allow the use of state funds or resources to provide essential household services, which is defined as "infrastructure that allows internet, energy, water, wastewater or other services as provided by law." The proposed ballot measure is somewhat vague; however, it could allow for state funds to be used to support privately owned infrastructure projects.

In comments on the measure, the New Mexico Public Regulation Commission noted that the state's Public Utility Act provides for investor-owned utilities and member-owned rural cooperatives to have the exclusive right to serve retail customers in their service territory and may conflict with the expenditure of state funds or resources to develop the supporting infrastructure.

The bond issue revenue would be allocated as follows:

In Kansas, an initiative on the ballot would allow the state Legislature, by a simple majority vote, to revoke or suspend rules and regulations adopted by any executive branch agency, effectively modifying the balance of power between the governor's office and the Legislature. While the measure is not energy specific in nature, it could influence the energy industry since the Kansas Corporation Commission is an executive branch agency, and if passed, the Legislature would have direct power to veto any regulation or rule the commission enacts.

In Arizona, a proposition would create the position of lieutenant governor.

Michigan voters will consider a ballot measure that modifies the current term limit statutes for members of the state Legislature. North Dakota is asking voters if term limits for the governor and state legislators should be established.

Generally, supporters of governmental term limits suggest that implementing such restrictions would provide an opportunity for new faces to the legislature and new leadership, which could bring about fresh and innovative ideas with a sense of urgency. Opponents of term limits say enforcing these restrictions could lead to less experienced and prepared members who will then rely on special interest groups and unelected bureaucrats to get up to speed.

In Arkansas and Idaho, voters will decide on a ballot measure to allow the Senate president and the speaker of the house of representatives to call a special legislative session.

A ballot measure in Kentucky would maintain the rules regarding the length of its legislative session so that legislators would meet for 30 legislative days in odd-year sessions and 60 legislative days in even-numbered years but would remove the requirement that the 60-day sessions adjourn by April 15. In addition, the measure would grant the Legislature the authority to call special sessions.

There is an ongoing debate as to whether shorter or longer legislative sessions are more effective. Supporters of shorter legislative sessions claim that shorter sessions help simplify issues and cut down on the number of laws enacted each year while reinforcing relationships with constituents. Proponents of longer sessions believe they cut down on unpredictable and hectic special sessions while facilitating a more efficient response to new federal laws that require state cooperation. Additionally, some maintain that certain issues are too complex to be debated and discussed in a short time frame.

Arkansas voters will also get to decide on a ballot measure that asks whether the state should require a 60% vote to pass constitutional amendments and citizen-initiated state statutes. Arizona has a similar ballot measure, except the 60% voting threshold would apply only to initiatives that would enact a tax.

In a separate measure, Arizona voters will decide whether citizen-initiated ballot measures should be limited to a single subject. Voters will also be asked whether additional financial disclosures should be required by entities and persons whose campaign spending exceeds a certain amount. A third election-related initiative in Arizona would allow the state Legislature to amend or repeal a voter-approved ballot initiative if any portion is deemed unconstitutional or invalid by the state or federal Supreme Court.

In Nevada, voters will be asked whether the state should establish open top-five primaries and ranked-choice voting for the general elections. If the measure passes, it will need to be voted on again in 2024.

Alaska and Missouri voters will consider ballot initiatives on whether the state should hold a convention to redraft the state's constitution. While not inherently energy-specific, constitutional conventions do not focus on a single issue; therefore, topics such as climate change and environmental regulations could be up for discussion if a convention is initiated.

In Florida, voters will decide whether to retain or abolish the Florida Constitution Revision Commission. The 37-member commission meets every 20 years to propose changes to the state's constitution and refer them to the statewide ballot for voter approval or rejection. Support for abolishing the commission increased after the 2018 general election when critics alleged that the commission's proposed amendments were either composed of several subjects bundled into one or that the language was inaccurate or misleading.

One example of a bundled amendment was Amendment 9, which asked voters whether they supported banning offshore oil and gas drilling and banning vaping in enclosed indoor workplaces. Many of the 2018 amendments faced legal challenges in state courts.

In Mississippi, the state Supreme Court ruled that any proposed ballot measure would technically be deemed unconstitutional since it could not possibly meet the state's distribution requirement after the state lost a congressional seat in 2001. The state constitution requires signature gathering for ballot initiatives to occur in five congressional districts. The Mississippi Legislature was unsuccessful in revising the initiative process during the 2022 legislative session.

Of the 21 states that allow for citizen-initiated statute ballot initiatives, 11 do not have any restrictions in place for legislative modifications to the approved ballot measures, meaning that even if voters approve an initiated measure, the legislature can repeal or amend the initiative. In the remaining 10 states, there are some restrictions in place that vary from supermajority votes in both legislative chambers to requiring a certain amount of time to elapse before modifications or repeal can occur.

In 23 states, citizens can vote in a popular referendum where voters may petition to demand a popular vote on a new law passed by the legislature.

The effective dates for the differing ballot measures vary by type and state.

There are some caveats for ballot measures. For example, New York does not allow for citizen-initiated ballot measures or legislatively referred state statutes; however, the state Constitution requires voters to have a say in any direct borrowing by or on behalf of the state. 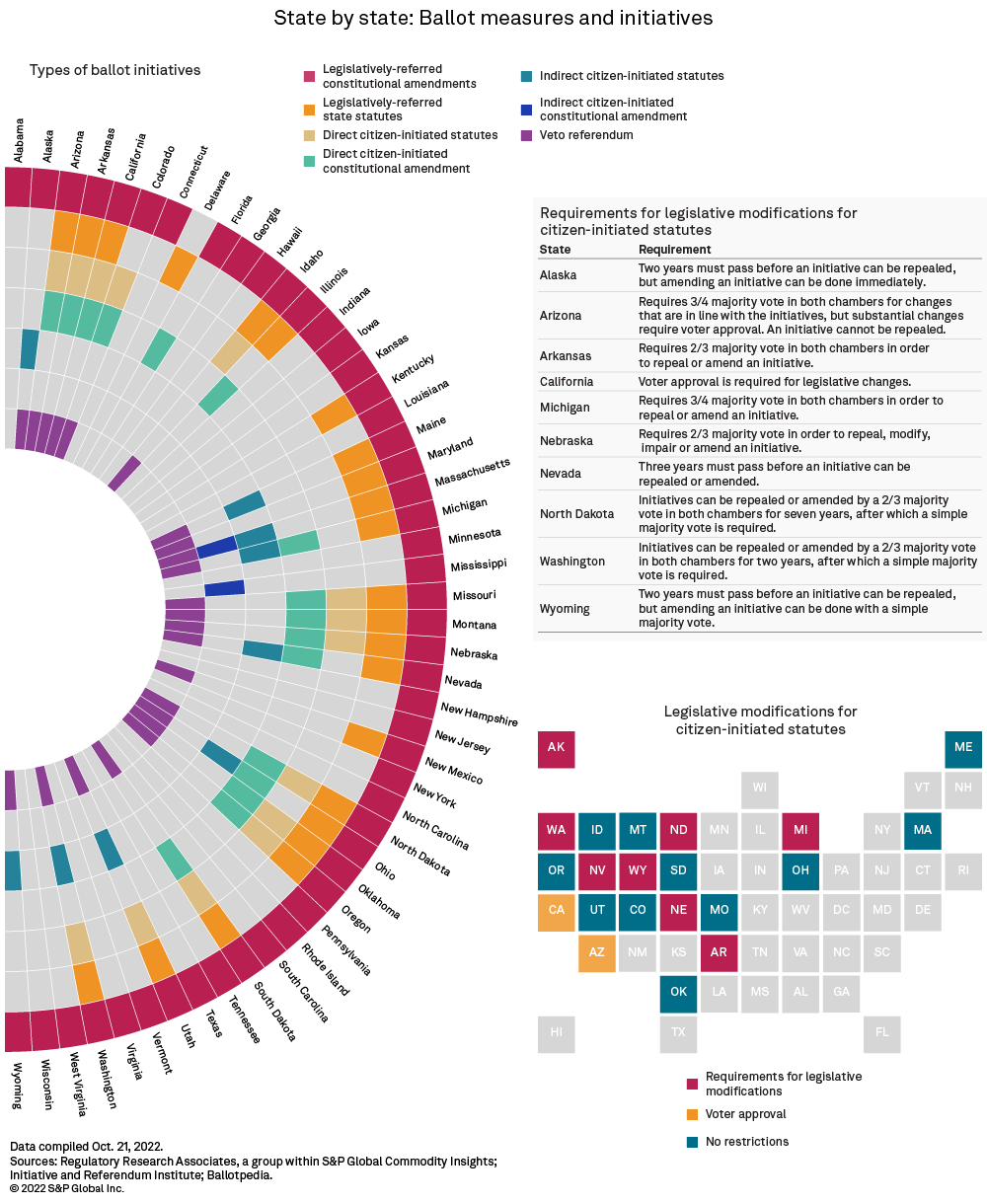 For a more detailed analysis of the 2022 general elections, visit our topic page.