Some of the same U.S. entities that generated the highest rates of growth in life, annuity and accident-and-health direct premiums and considerations in 2021 could be poised to generate above-market rates of expansion again in 2022.

The list of the fastest-growing U.S. life insurers in 2021, as determined by various criteria set by S&P Global Market Intelligence, was dominated by groups and stand-alone entities focused on annuity business as a pullback in sales of certain types of annuities amid the market volatility, distributor disruption and ultra-low interest rates that took hold upon the declaration of a pandemic in March 2020 made for easy comparisons. While premium volume in the business line jumped by 14.8% in 2021, inclusive of first-year premiums, single premiums and renewals, the rate of growth was only 9% above 2019's pre-pandemic tally. Though 2022 got off to a relatively slow start, multiple increases in the federal funds rate from March through July have since helped sales to surge to record levels.

In developing our projection for industrywide growth in ordinary individual annuity premiums and considerations of nearly 8.9% in 2022, we anticipate more of the same as especially favorable market conditions for annuity products that offer consumers attractive interest rates and principal protection are poised to generate especially strong growth. Our projected rate of growth for annuity business, overall, compares quite favorably to other lines.

Investors Heritage Life Insurance Co. ranked as the fastest-growing company in the sector in 2021 based on growth well in excess of 500% in both total direct premiums and considerations as well as direct first-year premiums and single premiums, a measure of new business production. Annuity-focused entities, including Investors Heritage, grabbed seven of the top 10 positions in each of the two categories.

Frankfort, Ky.-based Investors Heritage cited the April 2021 introduction of its fixed indexed annuity product and, to a lesser extent, sales of multiyear guaranteed annuities and preneed products for its outsized growth. Rapid expansion continued in the first quarter of 2022 as the company's premiums and considerations increased to $125.6 million from $37.9 million in the year-earlier period.

Comparisons get far more challenging for the company through the balance of 2022, but market dynamics appear to be considerably more supportive of sales growth for various types of both fixed-rate deferred and indexed annuities. Additionally, Investors Heritage recently introduced a new fixed indexed annuity product that offers fully guaranteed participation rates on indexed accounts during the surrender charge period and guarantees that policyholders will not lose account value when market performance is negative.

Investors Heritage's direct first-year premiums and single premiums tumbled by 76.4% in 2020 as the company reduced crediting rates at the start of the pandemic in light of economic uncertainty. Its 2021 volumes were still up 73.8% from 2019.

The pattern of a large 2021 increase following a substantial 2020 decrease in first-year and single premiums was not unique among our fastest-growing insurers, though not to the extremes displayed by Investors Heritage. The third- and fourth-fastest-growing insurers by direct first-year and single premiums showed a double-digit decline in 2020 followed by double-digit expansion in 2021. 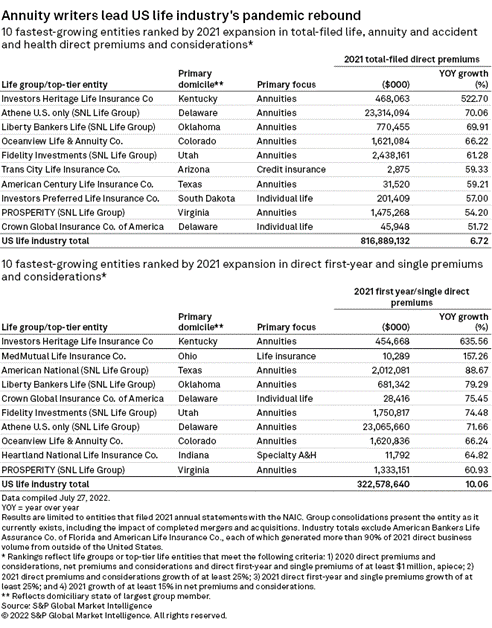 Second-quarter statutory data is not yet available, but we would anticipate a wide dispersion in the rates of growth annuity providers attained based to a large extent on the types of products they emphasize.

Lincoln National Corp., a large writer of variable annuities, reported a decline of 15.8% in total second-quarter annuity sales. At the other end of the spectrum, Athene Holding Ltd. posted "record" quarterly inflows and a doubling of applications in its fixed indexed annuity-focused retail channel during the second quarter, according to parent Apollo Global Management Inc.'s earnings report.

In the fixed indexed annuity business, the five-largest sellers in the first quarter of 2022 according to the Secure Retirement Index were Athene's U.S. life units, followed by Allianz Life Insurance Co. of North America, AIG, the Sammons Enterprises Inc. ESOT life companies and Fidelity & Guaranty Life Insurance Co. (Notably, F&G Life's indexed annuity sales slipped slightly on a year-over-year basis in the second quarter of 2022 to $1.11 billion from $1.14 billion, according to parent Fidelity National Financial Inc., but its MYGA production more than doubled to $1.09 billion.)

Athene experienced growth in direct writings in both the individual and group annuity businesses in 2021, but the latter of which is a result of its pension risk-transfer offerings. Its U.S. life subsidiaries placed behind only Investors Heritage in our list of fastest-growing entities in 2021 based on total direct premiums and considerations, and it ranked No. 7 by growth in direct first-year and single premiums.

Overall annuity sales increased by 16% in 2021, according to the Secure Retirement Institute. In contrast to the second-quarter 2022 trend, traditional variable annuities and registered index-linked annuities led the way against considerably different macroeconomic and equity markets backdrops. 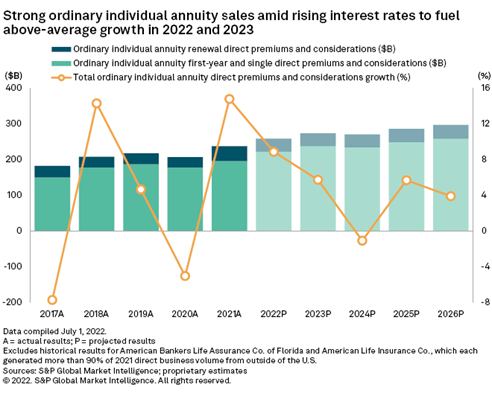