U.S. technology companies are piggybacking on India's real-time payments infrastructure and building everyday apps to embed themselves into consumer interactions in the world's only billion-person market outside China.

We believe they will further deepen their push into financial services, primarily leveraging alliances with traditional financial institutions and financial technology companies. Their payments strategies will seek to propel their e-commerce and advertising businesses.

Despite an economic contraction in 2020, mobile payments rose 67% year over year to $478 billion in India, according to our market report. Mobile transactions processed through the Unified Payments Interface, or UPI, system — an interbank network that allows nonbanking apps to initiate money transfers directly from users' bank accounts — totaled $458 billion in 2020 and in August 2021 were on track for more than $1 trillion in annualized payment value. Our 2020 estimates of mobile payments include stored-value wallet transactions, which declined 20% to $21 billion.

The UPI mobile payment network operated by the National Payments Corp. of India resembles Zelle, a popular payment network owned by leading banks in the U.S. that enables account-to-account transfers. Unlike Zelle, however, UPI has opened itself up to nonbanks, allowing technology companies to build consumer apps offering payment features. 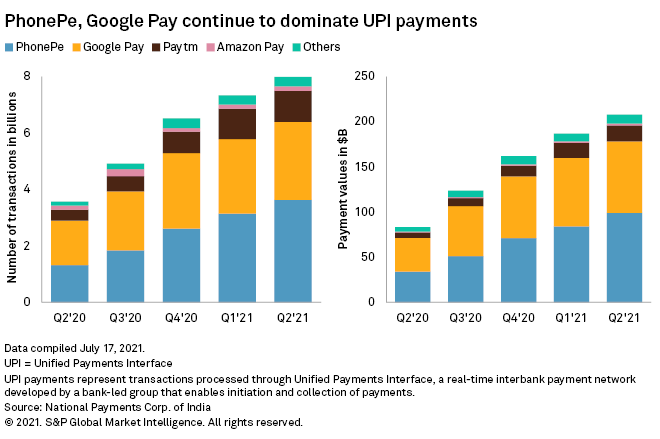 PhonePe and Google Pay continue to maintain their lead as the most popular UPI payment apps, enjoying market shares of 44% and 35%, respectively, in the first six months of 2021. Together, the two apps handled more than 12 billion transactions worth $338 billion.

By contrast, Paytm and Amazon Pay accounted for just 14% and 2%, respectively, of UPI transactions. Facebook's WhatsApp, a popular messaging app, is handling few transactions compared to the overall market. In November 2020, the messaging app launched the payments feature for 20 million users, but it is unclear whether it has become available to all its users. We expect all five companies to influence the mobile payments landscape in India.

PhonePe and Google Pay's dominance in UPI may not last indefinitely, however.

National Payments Corp. of India has set a cap of 30% on UPI volumes handled by third-party payment apps. PhonePe and Google Pay are the only apps that exceed the cap and have until 2022 to comply with the rules.

Further, the central bank plans to allow private players to compete with the National Payments Corp. of India, which also operates other mobile retail payment systems like card network RuPay. Media reports point to a broad interest among several large companies in the New Umbrella Entity licenses to set up and operate for-profit retail payment systems. This could create another wave of investments in India’s digital payments market and help create alternatives to UPI.

As such, we think India's mobile payments market will not become a duopoly like in mainland China, where Alipay and WeChat process the bulk of mobile payments. The network operator's curbs on market concentration could even cause market leader PhonePe to slow growth in UPI payments and accelerate its pivot toward other financial services.

As discussed in our 2020 report, for Amazon and Google, payments are just a means to propel their existing e-commerce and advertising businesses. Paytm and PhonePe, on the other hand, are using payments to acquire customers and build digital ecosystems of financial services and commerce from scratch. All four companies are developing an interconnected set of in-app services, providing options to fulfill daily needs in seamless ways. With WhatsApp's impending payments push, mobile payments in India will see a drawn-out battle for the top spot.