Driven by strong credit growth in 2020, the combined assets of all 19 Chinese banks on the top-100 list grew 17.66% for the period, 10 of which moved up the ranks. Total outstanding yuan loans at Chinese financial institutions reached a fresh record as of 2020-end, up 12.82% from a year earlier, as China pulled ahead of other major economies in recovering from the pandemic while pivoting toward technological self-reliance and net-zero emissions.

The top five institutions in the ranking, which include Japanese Mitsubishi UFJ Financial Group Inc. at No. 5, remained unchanged from the year before. The Tokyo-based giant held assets at $3.408 trillion, up 17.80%.

For the latest ranking, company assets were adjusted on a best-efforts basis for pending mergers, acquisitions and divestitures, as well as M&A deals that closed after the end of the reporting period through March 31. Assets reported by non-U.S. dollar filers were converted to dollars using period-end exchange rates. Total assets were taken on an "as-reported" basis and no adjustments are made to account for differing accounting standards. The majority of the banks were ranked by total assets as of Dec. 31, 2020. In the previous ranking published April 7, 2020, most company assets were as of Dec. 31, 2019, and were adjusted for pending and completed M&A as of March 31, 2020.

Among the most notable movements this year, U.S.-based JPMorgan Chase & Co. reclaimed its place as the world's sixth-largest financial institution. The biggest bank in the United States overtook U.K.-based HSBC Holdings PLC after reporting a 26.00% yearly increase in assets by the end of 2020, up to $3.386 trillion. The London-based institution, by contrast, dropped to the No. 8 spot with assets of $2.984 trillion. French BNP Paribas SA also made substantial progress by advancing two spots to become the world's No. 7. The Paris-based corporation saw its assets rise to $3.080 trillion as of 2020-end, up 26.80%.

Also in France, the postal service La Poste SA's banking unit, La Banque Postale SA, leapfrogged the greatest number of banks on the ranking. The company jumped 47 spots in 2020 from No. 89 to No. 42, with assets increasing by nearly $600.0 billion to $901.74 billion. The bank inked an agreement in 2020 to merge its fixed income and insurance-related asset management businesses with Natixis SA. It has also acquired Groupama Group's 35% stake in joint venture La Banque Postale IARD, whereas earlier in the year it had gained clearance to takeover CNP Assurances SA and become its majority shareholder.

Spanish bank CaixaBank also was among the meteoric performers on the list, advancing from No. 65 to No. 45 bolstered by its merger deal with Bankia SA.

Conversely, Brazilian major players Banco Bradesco SA and Banco do Brasil SA showed the greatest slides in the ranking. State-controlled Banco do Brasil fell 15 spots to No. 92, with $326.16 billion in assets, whereas Bradesco dropped 18 spots to No. 97, with $308.99 billion in assets. A sharp depreciation in the Brazilian real, which was among the most battered emerging market currencies, accounted for the swift repricing of assets when measured in U.S. dollar terms. The Brazilian real lost 29.21% of its value in 2020 against the dollar.

Seven out of the twelve U.S. banks on the list showed an improvement in rankings this year. But while the largest player in the country, JPMorgan Chase Co., advanced to reclaim its No. 6 position, it would have ranked even higher, at No. 4, had it reported in IFRS instead of U.S. GAAP. Under IFRS, the gross value of derivatives is reported while U.S. GAAP requires the net value to be reflected. Had this been the case, JPMorgan would have taken a place at the top tier, breaking the dominance of China's "Big Four." Along similar lines, Bank of America Corp. would have ranked No. 7 instead of No. 9 under IFRS reporting. 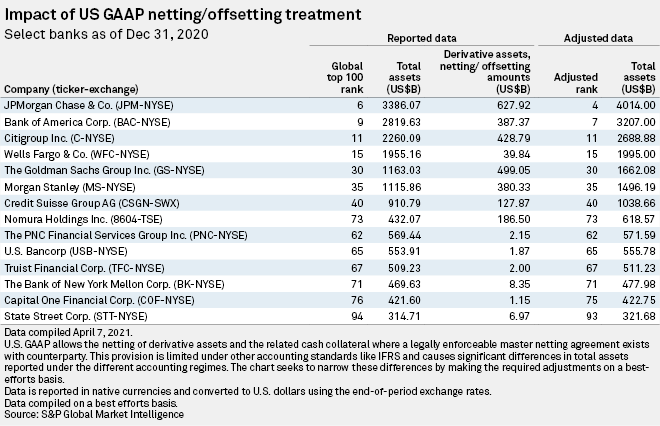 Previous 2019 entrant Raiffeisen Gruppe Switzerland managed to retain its place among the biggest lenders, coming in at No. 98 with $293.48 billion in assets. Spanish Banco de Sabadell SA, on the contrary, and Brazilian Caixa Econômica Federal, dropped off the list this year.

China continues to house the greatest number of top 100 banks, with 19 institutions collectively holding assets worth $30.458 trillion. The so-called "Big Four" account for more than half of that total value. The U.S. banks follow, with 12 institutions holding a combined asset size of $15.538 trillion.

Despite the fact that the pandemic struck the industry hard, the number of banks in the world which have reported an asset size above $1 trillion has increased from 29 to 39 in 2020.

Download the full report of the world's 100 largest banks here.