Electronic money payments are growing in at least three large Southeast Asian markets due to the popularity of reloadable wallets.

Nonbanks have overtaken banks as primary payment providers in Indonesia and are experiencing high growth in the Philippines.

Grab Holdings Inc., Sea Ltd. and Ant Group Co. Ltd. are among the e-money companies with the largest geographical footprint, offering payments in at least six countries in Southeast Asia.

Nonbanks have overtaken banks as primary payment providers in Indonesia and are experiencing high growth in the Philippines, while banks remain dominant in Singapore, Malaysia and Thailand, according to S&P Global Market Intelligence's latest Southeast Asia E-Money Market Report. The report looked at the usage of three popular retail payment instruments in the region: debit and credit cards; e-money comprising reloadable prepaid cards and digital wallets; and real-time interbank transfers. It shows that the primary instrument of cashless payments for everyday transactions in Southeast Asia is e-money, which refers to prepaid monetary value stored and transferred electronically using cards or e-wallets. 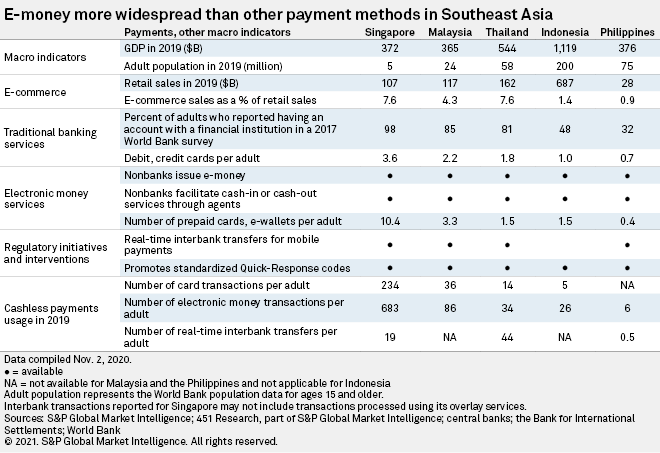 E-money a proxy for fintech payments

Popular technology firms with varied business interests in the region are investing in e-wallets. The low penetration of traditional cashless instruments makes it imperative for firms to provide consumers with access to a viable instrument to perform digital transactions. Provision of payments and other financial services have thus become central to their customer acquisition efforts.

Grab Holdings Inc., Sea Ltd. and Ant Group Co. Ltd. are among the e-money companies with the largest geographical footprint, offering payments in at least six countries in Southeast Asia. They have e-money licenses to operate payments in most of these countries. For example, Sea has e-money licenses in Malaysia, Thailand, Indonesia, the Philippines and Vietnam. Grab works with domestic e-money partners in Thailand, Indonesia and Vietnam, while it has e-money licenses in Thailand, Malaysia and the Philippines. In Singapore, they enjoy a temporary exemption from holding payments licenses. 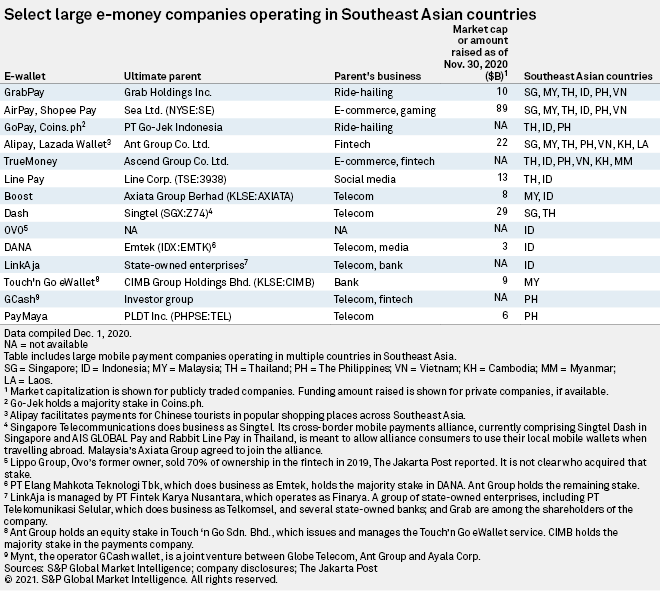 The rise of digital payments in the region coincides with the consumption of online services such as ride-hailing and e-commerce. Unlike in the U.S., where payments-focused technology firms such as PayPal Holdings Inc. and Square Inc. are becoming gateways to online and offline commerce, payment processing in the Southeast Asian region is largely an extension of ride-hailing, e-commerce and other digital services. Large ride-hailers and e-commerce firms in the region function like financial technology companies.

For technology firms, e-money provides an attractive entry point into financial services without the burden of bank-like regulations. The dominance of nonbanks as e-money issuers across the region makes e-money a good proxy for fintech payments.

Nonbanks account for most e-money license holders in Indonesia, Malaysia and Thailand, primarily offering e-wallets. Only in the Philippines do banks hold more e-money licenses than nonbanks, but the gap between Filipino banks and nonbanks is rapidly shrinking. Since October 2019, the number of nonbanks issuing e-money grew to 24 from 14 in the Philippines, while that count for banks fell to 27 from 30. In Singapore, at least 126 nonbanks issue e-money without regulatory licenses due to a temporary exemption provided by the central bank. 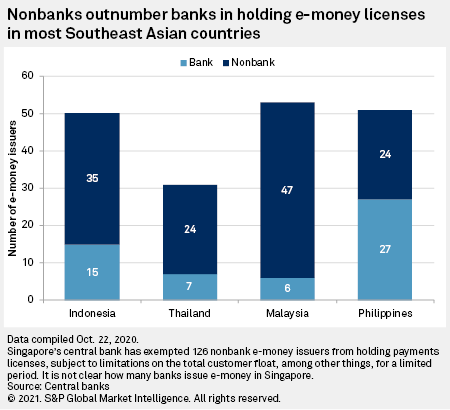 In terms of transaction value, nonbanks are either bigger than banks or growing faster.

Nonbanks accounted for 72% of e-money payments value in Thailand in 2019. In Malaysia, three nonbanks — Boost, GrabPay and Touch 'n Go — collectively represent most of the market share, according to the country's central bank, with a combined customer base of 21 million and combined network of more than 400,000 merchants.

Banks are losing clout in e-money amid the growing popularity of mobile services offered by technology firms. The shrinking space for banks in e-money may also be driven by a shift in consumer banking toward promoting higher-margin products such as credit cards. Besides, regulatory efforts to promote real-time interbank transfers in some countries have given banks a new way to help build payment relationships with customers and merchants.

Indonesia's e-money market is growing faster than that of other large Southeast Asian countries, but the scope for replacing cash is far greater in the archipelago than in Singapore, Malaysia and Thailand. The slow pace of credit card issuance in the country could mean that Indonesia's cashless payments will increasingly tilt in favor of stored-value wallets.

In Indonesia, banks have historically dominated payments by offering prepaid cards to a largely unbanked population. In 2018, PT Bank Central Asia Tbk, which is the largest bank by market capitalization, and state-owned banks PT Bank Mandiri (Persero) Tbk and PT Bank Rakyat Indonesia (Persero) Tbk accounted for most of the e-money transactions.

As people are increasingly adopting mobile phones, however, banks have failed to extend their lead in prepaid cards to mobile payments. About 54% of the outstanding value of funds in e-money accounts was held with nonbanks at the end of 2019, up from 36% at the end of 2018, according to Bank Indonesia's data. 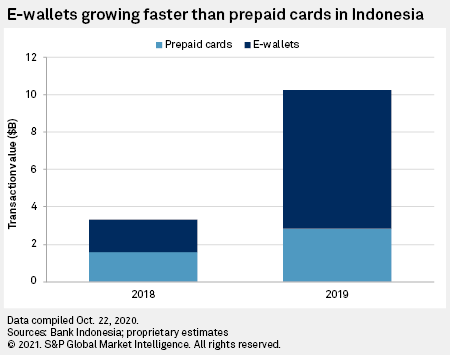 Sea's growing popularity in Indonesia, on the back of aggressive marketing and discounts, has made Indonesia's mobile wallet market a three-pronged race in 2020. In the second quarter of 2020, purchases made using the ShopeePay wallet on Sea's e-commerce platform alone may have accounted for more than 10% of e-money transactions in the country. Sea's mobile wallet likely holds a much larger market share in the country as the wallet users can make payments in offline stores as well.

ShopeePay enjoyed a 26% adoption rate among MarkPlus survey respondents, The Jakarta Post reported in September. Other popular wallets include DANA, which is majority-owned by Emtek Group and counts Ant Group as an investor, and LinkAja. DANA exists as a stand-alone payment app and supports payments on e-commerce companies Bukalapak and Lazada, which are also backed by Ant Group and Alibaba Group Holding Ltd.