The dealmaking environment has experienced quite a turnaround.

At the start of the COVID-19 pandemic, some investment banking executives wondered when M&A activity would return. However, it started to accelerate in late 2020, and the momentum carried into 2021. 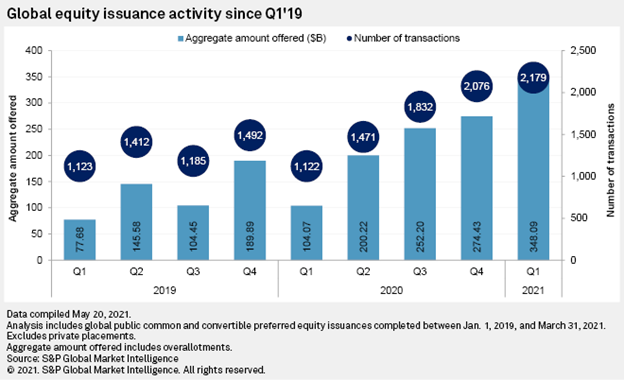 Executives are often more willing to pursue M&A transactions when they are optimistic about the economic outlook, and in May, the Conference Board noted that its survey results of CEO confidence reached an all-time high. Financing for acquisitions is also readily available with interest rates remaining at historic relative lows. The equity markets have experienced some swings but valuations remain high, giving buyers a stronger currency to pursue deals.

It's too soon to know if the the Biden administration will find enough support in its pursuit for higher taxes on capital gains, but the threat of the increased rates could also push sellers to accelerate transactions in effort to complete deals before any changes in the taxes would take effect. The need to expand technology remains a catalyst for M&A as companies in many industries are facing disruptive challenges, some of which were sped up by the pandemic.

Increased private equity activity helped fuel U.S. M&A dealmaking activity in the first quarter, and some firms are exploring different avenues to stockpile dry powder for acquisitions. In the first quarter, a popular way to raise pools of capital for deals was through IPOs of special purpose acquisition companies, which are developed for the sole purpose of buying a private company to take public. Many of those that completed SPAC IPOs are still on the hunt to execute acquisitions, but the growth rate of new blank check companies has slowed after the SEC released accounting guidance on warrants, which give investors the right to buy additional shares at a later date.

The guidance centers around whether SPACs should account for the warrants as equity or debt. As the industry works through the issue, the SPAC issuance activity will likely find a leveling point below the breakneck pace that boosted U.S. IPO totals in the first quarter. 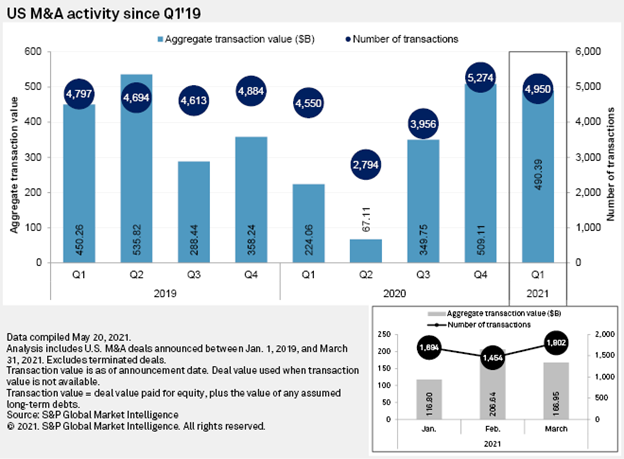 While SPACs garnered much attention to start 2021, more traditional IPOs were also coming to market. The first quarter generated 75 non-SPAC U.S. IPOs that raised $29.85 billion, and those totals were higher than any single quarter in 2019 or 2020.

The IPO market has hit speedbumps in the second quarter with some potential issuers such as Genworth Financial Inc.'s mortgage insurance company Enact Holdings Inc. having to postpone deals because of market volatility. But the window is not completely closed. In late May, Flywire Corp. priced its IPO at the top end of the range after upsizing its offering.

Headwinds do exist in the dealmaking environment. Markets are experiencing inflationary pressures related to government intervention, which has helped keep asset prices high and increased demand at a time when supply is constrained. This has caused some investors to worry that central banks could raise interest rates, and that would lead to higher costs of financing and lower valuations.

Still, there is much greater clarity in the operating environment today and the near-term outlook is certainly better than a year ago.