Apr. 04 2018 — The recent buzz in the commodities sector around lithium-ion batteries and their use in the growing electric vehicle market has centered around relatively minor commodities such as lithium, cobalt, vanadium, and graphite. However, there are also implications for major commodities, and it seems likely, based on current technology, that nickel will play an important part in this story.

Lithium-ion batteries used by many of the major electric vehicle manufacturers use a cathode that is primarily composed of nickel. However, not all nickel supply is suitable for manufacturing battery cathodes. Only 49% of 2017 nickel supply, from sulfide and limonite deposits, is suitable for this purpose, and extracting nickel from the latter deposits is less attractive as costs are generally higher than from sulfide deposits.

Discoveries of new nickel deposits, particularly sulfides, are rare. Although there are a number of existing projects that could help meet increasing demand for nickel in lithium-ion batteries, it remains to be seen whether potential future output from these projects will be sufficient to meet the demand.

Tesla co-founder and CEO Elon Musk was quoted in 2016 as saying that "Our cells should be called Nickel-Graphite, because primarily the cathode is nickel and the anode side is graphite with silicon oxide ... [there is] a little bit of lithium in there, but it's like the salt on the salad." Neither Tesla nor Panasonic, which manufactures the batteries used by Tesla, report the composition of the batteries used in their products. However, it is widely reported that Tesla uses a lithium-ion battery with a cathode primarily composed of nickel, cobalt, and aluminum. These batteries typically have a cathode composition of 85% nickel, 10% cobalt, and 5% aluminum.

Another widely used lithium-ion battery in current electric vehicles is the nickel, manganese, and cobalt battery, which is used in electric vehicles produced by Chevrolet and Nissan. This battery has a cathode that is typically made up of 60% nickel, 20% manganese, and 20% cobalt. However, many manufacturers of this battery are now working toward producing batteries with cathodes containing 80% nickel. This is because higher nickel content in these batteries increases energy density and extends vehicle range. This comes alongside efforts to minimize exposure to cobalt, which is primarily sourced from the Democratic Republic of the Congo, and because of the sharply higher cost of the metal; the cobalt price rose 129% in 2017.

Other battery technologies are either already available or under development that use less nickel or no nickel at all. However, given that the major electric vehicle producers are favoring batteries with significant nickel content, we believe it likely that nickel will continue to be an important commodity in the manufacture of lithium-ion batteries for use in electric vehicles. Consequently, demand for nickel for this end use will increase along with the burgeoning use of electric vehicles.

Despite this important new source of demand for nickel, the metal's primary use is in the production of stainless steel, and this will continue to be the case for the foreseeable future. Complicating the various supply-demand scenarios is the fact that not all forms of nickel-containing products from mining operations are suitable for use in batteries.

Nickel sulfate is the key nickel-bearing product used by battery manufacturers. This is why BHP Billiton Group committed US$43.2 million to facilitate nickel sulfate production at its Kwinana refinery at the Nickel West operation.

Nickel sulfate can only be produced economically from class one nickel products, which are defined as products with a nickel content of 99% or more, with the cost of converting ferronickel and nickel pig iron to nickel sulfate not being economically viable. This effectively rules out the supply of nickel for lithium-ion batteries from all ferronickel and nickel pig iron operations. In 2017, these operations produced 51% of global mined nickel supply, meaning a significant proportion of global nickel supply cannot be used in the production of lithium-ion batteries. We estimate that mined nickel supply will grow 12% from 2017 to 2020. However, we forecast that mined supply suitable for battery manufacture will only grow 2% over this period. 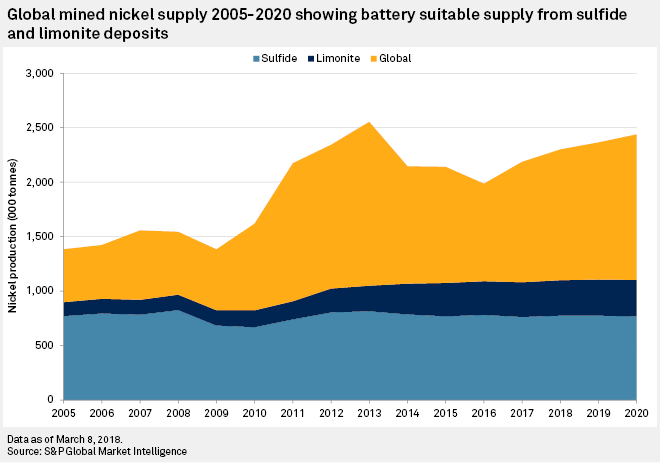 Suitable nickel supply can be found from two sources: nickel sulfide deposits and nickel limonite deposits, the latter being a type of laterite. Nickel sulfide deposits, such as those exploited by PJSC Norilsk Nickel Co. and in Voisey's Bay and Ontario Division, are exploited using open pit or underground mining. The ore is processed using conventional crushing, grinding, and flotation to produce a nickel concentrate, which undergoes smelting and refining to produce finished class one nickel products.

These deposits benefit from the presence of valuable byproduct metals such as copper, cobalt, gold, silver, and platinum group metals. On average, these operations are lower-cost, on a co-product basis, than nickel-mining operations exploiting limonite or saprolite deposits due to production costs being spread out over the multiple commodities as well as the processing techniques being relatively simple and well established.

The largest cost components at these operations are treatment and refining charges and shipment charges. The latter incorporates the cost of transporting nickel concentrates produced at the mine to smelting and refining facilities, while the former includes the cost of converting the material to finished nickel products. In 2017, these two costs made up 44% of the total cash costs of these operations.

Labor costs are also relatively significant at operations exploiting sulfide ores, compared with those at operations exploiting laterite deposits. Labor costs made up 26% of total costs at sulfide operations in 2017, compared with an average of 15% across limonite and saprolite operations. This is a result of sulfide operations — which exploit hardrock deposits, sometimes at significant depth — using more complicated mining techniques, which require a greater number of employees compared with laterite deposits. The latter occur close to the surface and are extracted exclusively using open pit mining techniques andsometimes not even requiring blasting. In addition, a significant proportion of laterite mining operations are in countries with lower wage rates, such as Indonesia, the Philippines, and Cuba.

The complicated part of exploiting limonite deposits, such as those at Murrin Murrin, Ambatovy, and Goro, is in the processing stage. High-pressure acid leach, or HPAL, the most common process for extracting nickel from these deposits, involves treating the ore with an acidic solution, usually sulfuric acid, in a pressurized autoclave at high temperatures. This process liberates both nickel and cobalt held in the ore, with the end product usually being mixed nickel and cobalt hydroxides or sulfides, which can then be refined to finished class one nickel products.

This process was pioneered at Moa Bay in Cuba in the 1960s and has been used increasingly in recent years. However, the HPAL process presents inherent challenges because of its use of high pressures and temperatures combined with corrosive substances. This has led to several well-documented problems at major HPAL projects, including Murrin Murrin, where significant delays were encountered in the design, construction, and commissioning of the processing plant, and at Goro, which was originally designed to produce 60,000 tonnes per year of nickel but has yet to reach near this level, despite first production being achieved in 2011, due to technical difficulties with the processing plant.

The technical difficulties and high costs combined with the low nickel price in recent years have led to problems at several of these operations. Ravensthorpe, operated by First Quantum Minerals Ltd., was put into care and maintenance in August 2017, Vale SA is reviewing the Goro operation, and Sherritt International Corp. wrote down C$1,723 million of its Ambatovy asset in 2015.

Sulfide operations will continue to have an advantage over limonite operations, due to the factors mentioned above. However, an increase in nickel demand suitable for use in lithium-ion battery production may provide some respite to HPAL operations that have struggled in recent years. 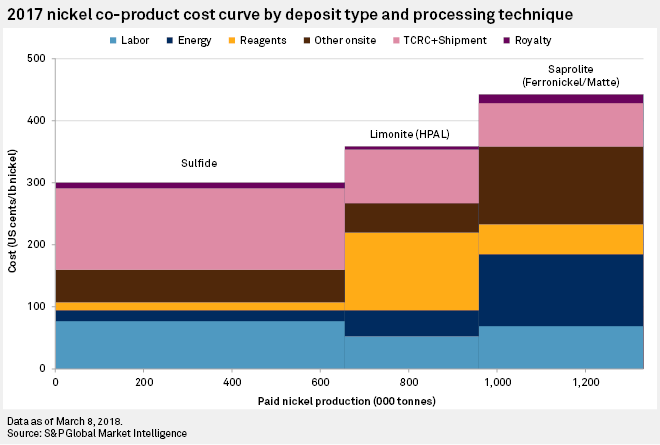 Major nickel discoveries, particularly sulfides, are relatively rare, with only one sulfide deposit discovered within the past decade, Nova-Bollinger, now in production. Exploration budgets for nickel have also been slashed since the highs of 2008, following the precipitous fall in the nickel price from a high of US$24.50/lb in May 2007 to a recent low of US$3.43/lb in February 2016 — a drop of 86%. 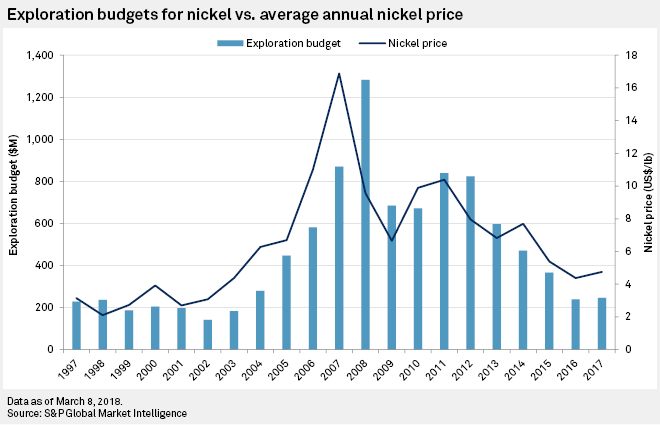 Despite the recent lack of new discoveries, a number of projects will be able to add to the supply of nickel suitable for use in the lithium-ion battery sector should the demand materialize. S&P Global Market Intelligence has identified nine projects with nickel reserves. In addition, three operations that are on care and maintenance could be restarted should nickel prices improve: Ravensthorpe, Tocantins, and Savannah. These 12 projects have the potential to add a combined 243,000 tonnes to annual nickel production: 112,000 tonnes from limonite deposits and 131,000 tonnes from sulfide deposits.

Black Swan, NorthMet, and Lake Johnston are already included in our projection of 2020 nickel supply. Excluding these three projects, the remaining nine have the ability to add 20% to our projected 2020 supply of mined nickel that is suitable for use in the lithium-ion battery sector. It is very unlikely that all of these projects will go ahead at the same time, and even if they are given approval, construction times would likely mean new supply would not come online until after 2020.

These figures give an indication of supply that could be available to replace mines that may close due to reserve depletion and to add new supply for the lithium-ion battery market without the need for new discoveries. Should demand for nickel, particularly in the lithium-ion battery sector, increase sufficiently, the owners of some of these projects may be incentivized to give them the go-ahead in the near future. 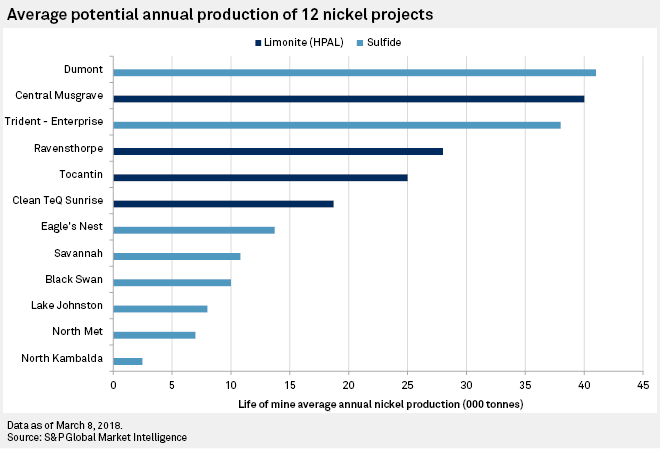 The other factor to consider in this potential additional supply is the longevity of these projects. Black Swan, Lake Johnston, and North Kambalda all have current reserves below five million tonnes of ore and despite being relatively high-grade, are unlikely to be able continually to supply nickel for use in the battery sector over the long term. However, five of the projects — Central Musgrave, Clean TeQ Sunrise, Dumont, NorthMet, and Ravensthorpe — have last reported ore reserves totaling over 100 Mt, which would enable them to continue to produce at their annual average production rate for over 20 years, despite relatively low grades at Dumont and NorthMet. These five projects have the potential to provide 135,000 t/y of nickel suitable for use in the lithium-ion battery sector over the long term, which represents a 12% increase to our estimated 2020 nickel supply that is suitable for this sector. 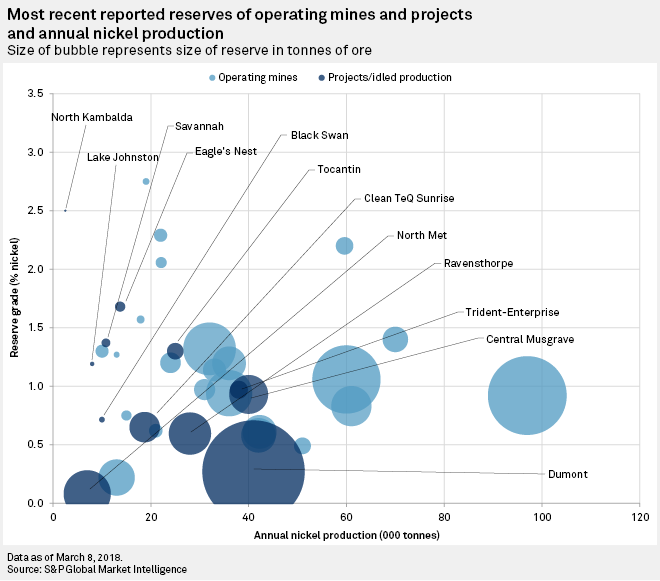 Whether existing nickel supply and these potential additions will be sufficient to supply the long-term demand for nickel in the production of lithium-ion batteries remains to be seen. A lot will depend on how quickly electric vehicles displace internal combustion engine vehicles. If there is a shortfall, then it may lead to increases in the nickel price that could allow previously uneconomic projects to become viable and incentivize greater exploration spending on battery nickel.

The fact that only certain nickel products are suitable for use in lithium-ion batteries may lead to differing supply and demand fundamentals in the wider nickel market. Should the demand for nickel in lithium-ion batteries increase sufficiently, it could lead to a different pricing structure for class one nickel products, which are suitable for this use, compared with those which are only usable in stainless steel production: ferronickel and nickel pig iron.

These influences can already be seen to a degree, with nickel sulfate regularly fetching a premium over London Metal Exchange nickel prices. If the trend continues, priority will be given to bringing projects that can produce nickel products suitable for lithium-ion battery use into production over those that can only produce products suitable for use in stainless steel manufacturing.

Gain essential mining intelligence with our unbiased insights into the global mining industry. Request a demo.