Rapid increases in costs to repair and replace vehicles appears to have significantly impacted costs to close both new and older claims in the third quarter, an S&P Global Market Intelligence analysis of newly filed statutory financials by the No. 1 U.S. private auto insurer concludes.

The top-tier mutual was responsible for $4.18 billion of the group's tally. This amount appears to rank as the largest net underwriting loss for any individual U.S. P&C insurer in any quarter in at least 21 years without adjusting for inflation, surpassing the $3.44 billion in red ink that Allstate Insurance Co. posted in the third quarter of 2005 when Hurricane Katrina struck the Gulf Coast.

State Farm Florida Insurance Co., the entity through which the group writes Florida homeowners business, also showed effects from Ian. That company's net underwriting loss of $221.1 million came within $10.4 million of the loss it posted in the third quarter of 2017 when Hurricane Irma hit Florida. Its direct incurred losses of $943.3 million exceeded its net incurred losses by 2.9x, reflecting the role played by reinsurance.

The group's private auto liability rose slightly from an already elevated level, increasing to nearly 97.8% from 97.5% in the second quarter. But it was 22.1 and 27.5 percentage points above the respective results for the first quarter of 2022 and the third quarter of 2021. Across private auto lines, the group's direct incurred loss ratio was 99.4% in the third quarter, up from 82.2% in the first quarter and 93.0% in the second. 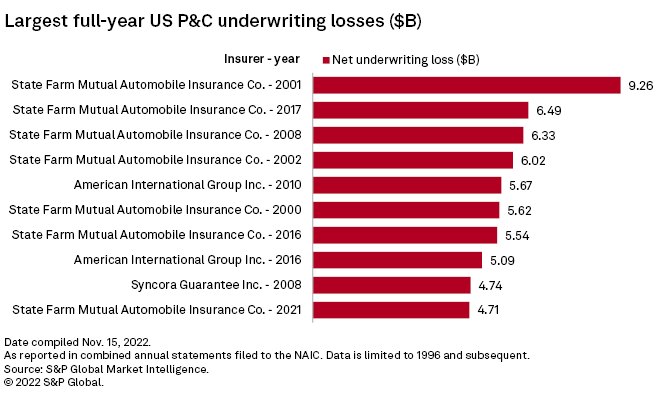 Adverse reserve development might have arisen across the private auto lines, though quarterly statements lack granularity in that regard. The Allstate Corp., for example, primarily attributed its $632 million in unfavorable prior-year reserve reestimates in the third quarter to the bodily injury and physical damage coverages. For the former, according to Allstate's 10-Q, the company updated its assumptions related to the severity of third-party bodily injury claims, increased claims with attorney representation, litigation costs and higher medical inflation. For the latter, the company cited supply chain-fueled inflationary pressures and the length of time needed to resolve claims.

State Farm General Insurance Co. told the California Department of Insurance in a COVID-19 questionnaire associated with a September rate filing that it had been observing higher claims severity across coverages, including bodily injury liability. The group's quarterly statutory filings typically do not include substantive qualitative commentary on the drivers of reserve development.

Thanks to the outsized underwriting loss, State Farm Mutual Auto posted a net loss of $2.83 billion for the third quarter. That marked the company's fifth consecutive net loss and by far its largest in any quarter since the start of 2001 prior to adjusting for inflation. When combined with a net change in unrealized capital gains and losses of $3.79 billion, the top-tier mutual's surplus slipped to $124.00 billion as of Sept. 30 from $130.61 billion on June 30 and $143.18 billion at year-end 2021. On a relative basis, the 13.4% decline in surplus through the first three quarters of 2022 stands as State Farm Mutual Auto's most significant such retreat since 2002.

A perusal of third-quarter statutory filings already received by S&P Global Market Intelligence finds that large negative changes in net unrealized capital gains and losses were widespread in the U.S. P&C industry through the period, reflecting the impact of broad pressure on both stock and bond valuations.

Group-level results for the third quarter reflect the manual collection of data reported by 12 distinct State Farm group members for the first nine months of 2022, less electronic results tabulated by S&P Global Market Intelligence for the first half of the year. Statutory financials for State Farm Classic Insurance Co. have not been publicly disseminated and are excluded.

References to reserve development for the third quarter reflect the difference between year-to-date results through Sept. 30 and June 30. Quarterly statements include a brief discussion of changes in incurred losses and LAE on Note 25 and data on development across business lines for accident years 2020 and 2021 as well as the combination of accident year 2019 and all prior periods.

S&P Global Market Intelligence's group-level results for State Farm include historical data for MGA Insurance Co. Inc., which State Farm acquired in 2020. Where applicable, this article uses combined annual statement data for State Farm to eliminate MGA Insurance's results prior to the year of the acquisition.

Manually tabulated results are subject to change upon the receipt of electronic data for the third quarter. S&P Global Market Intelligence expects to release the initial round of Sept. 30 statutory financials on Nov. 19.

Terry Leone contributed to this article.