Lithium On The Rise


Lithium On The Rise

Lithium gains upward momentum in the commodities sector with a threefold price increase in the past 12 months.

Lithium prices have more than tripled in the past year

Apr. 07 2016 — New electric automobiles and devices, and the energy storage batteries that drive them, have been driving up demand for lithium, a trend that has not gone unnoticed by the mining sector.

Amidst the general price slump in the commodities sector, lithium prices have more than tripled in the past year, with the lithium carbonate 99% price index closing at US$21,970 per tonne on March 10, up from US$6,277 per tonne a year ago. 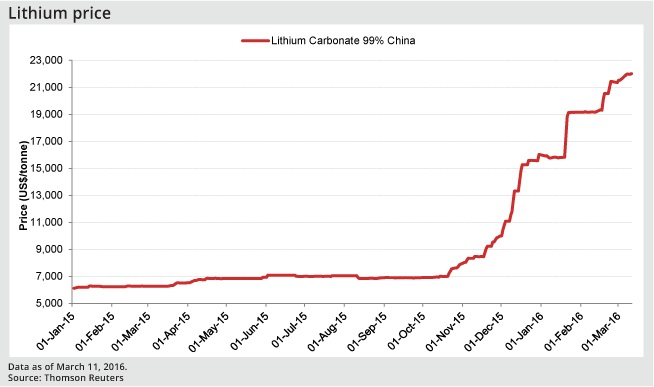 In 2014, Tesla Motors Inc. selected Nevada as the site for its Gigafactory lithium plant, which is expected to be operational in 2017, processing some 25,000 tonnes of lithium hydroxide annually, Bloomberg reported in February, citing Benchmark Mineral Intelligence Ltd.

In September 2015, Tesla began securing lithium hydroxide supply by entering an offtake agreement with Pure Energy Minerals Ltd. The agreement involves potential supply of lithium hydroxide from the Clayton Valley South project, which is located approximately 418 kilometers from the Gigafactory.

Since then, lithium mining activity in the region has only increased.Nevada was a hotspot of lithium asset acquisitions in 2015. Out of the 45 lithium-focused deals announced in 2015, 21 were located in the state.

According to SNL Metals & Mining, Nevada hosts 23 active lithium properties, of which three have defined reserves and resources totaling 1.7 million tonnes of lithium. Chemetall Foote Corp.'s Silver Peak project is currently the only producing lithium mine in Nevada. However, there are several early stage projects, and some companies have begun raising funds to further project development. 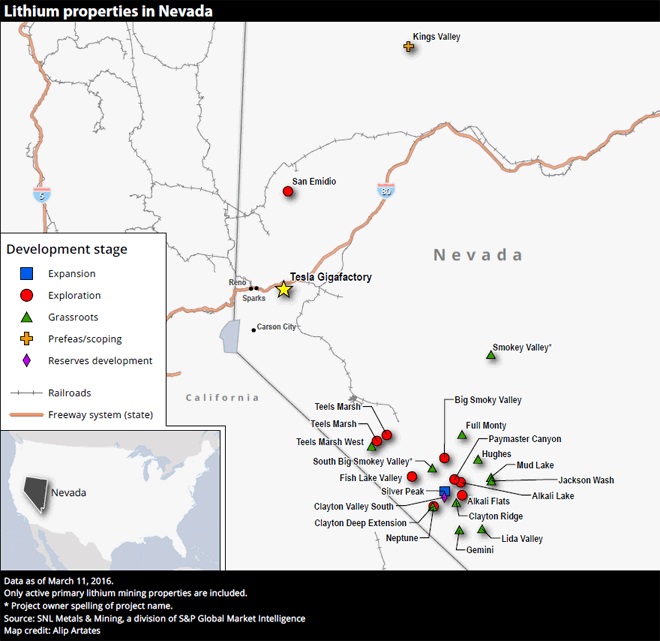 The lithium boom has also spread to other parts of the world. In Australia, several mining companies have begun preparing to meet anticipated lithium demand.

"The demand in vehicles, electric bikes, trucks and buses is going to be enormous, and the electric storage market is also going to be significant," said Neil Biddle, executive director of Pilbara Minerals Ltd., according to Bloomberg.

Learn more about our commodities research in a personalized demo.

General Mining Corp. Ltd. is another active player in the lithium market. The company announced Jan. 21 that is has completed its commitment to spend A$7 million on the planned restart of its Mount Cattlin Creek property, also in Western Australia, which is expected to start exporting concentrates in July.

Mitsubishi Corp., one of the largest lithium traders, signed an agreement with General Mining in October to sell up to 100% of the lithium-bearing spodumene concentrate produced from the property. The deal has a term of four years, with an optional one-year extension.

Chile, which hosts some of the world's largest lithium reserves, is also making headway on lithium amid the downturn in the commodity market. On Jan. 26, the government announced the first measures of its national policy for lithium exploitation.

Prolific lithium M&A activity that began in 2015 continues in 2016, considering that as the end of the March quarter draws near, 21 lithium deals have already been announced — close to half of the total number of lithium deals in 2015. The equity market is also responding. Rare Earth Minerals Plc recently announced that it has raised about £3.6 million by placing ordinary shares to fund further strategic acquisitions in the lithium sector.

There is a concern that the demand for lithium is being overestimated, and may lead to oversupply in the coming years. For now though, lithium is a bright light to miners in an otherwise dim commodity landscape.