In pre-pandemic days, Latin America had already presented itself as a propitious location for cloud industry developments for several reasons — namely, the underserved status of the region, its large population (often concentrated in major metropolitan hubs), and receptivity to U.S. and Chinese providers. With the COVID-19 pandemic, as companies sought to have their infrastructure closer to end users, American and Chinese cloud providers increased their levels of investment in Latin America and announced new cloud regions for unserved markets. The region is now home to over a dozen cloud regions, with Amazon Web Services Inc., Google LLC, Huawei Technologies Co. Ltd., International Business Machines Corp., Microsoft Corp. (Azure), Oracle Corp. and Tencent Holdings Ltd. building out 10 new regions since early 2020.

Cloud activity has positively impacted the region's datacenter markets, particularly the local industries in Chile and Mexico. 451 Research's Datacenter KnowledgeBase found that compound annual growth rate numbers for both markets significantly changed when comparing the 2015-2020 period with 451's 2020-2025 forecast. The Chilean market saw a 16% CAGR in the first period and is expected to grow at a 22.5% CAGR from 2020 to 2025. Mexico demonstrated a more modest 2.1% rate from 2015 to 2020, which is expected to increase tenfold to 22.2% for the period from 2020 to 2025. New cloud provider activity has served to elevate these datacenter markets from minor local industries to major regional destinations, rivaling Brazil.

Latin America offers a dynamic competitive landscape that has allowed global providers to flourish, as billions of dollars in investment have poured into countries like Brazil, Mexico and Chile. The region presents an interesting case study, as Chinese and American interests at play seem to converge and, at many times, motivate each other's investments in various countries. For example, Huawei was one of the first providers to fully invest in multiple markets, launching cloud regions across Brazil, Mexico and Chile in 2019. With Latin America emerging as neutral ground in the battle of the cloud giants, its local tech industries may stand to gain the most, as cloud activity has already bolstered associated sectors, including the region's leased datacenter industry.

These new developments could also bring about decentralization of Brazil in the regional cloud scene, as providers find service options in other countries, which may also be cheaper. For instance, as of 2022, 451 Research's Cloud Price Index finds that cloud services in Chile are about 10% less expensive than services in Brazil. But there are some caveats: As an older cloud market, Brazil offers certain services still unavailable in other countries, and it classifies as a low-carbon region, while Chile does not. Although it is still too early to discern the full extent of their impact, these new cloud regions will likely change Latin America's cloud industry dynamics and significantly affect how regional customers adopt various services.

Chile was one of the Latin American markets to see the earliest levels of cloud activity, which some might consider surprising considering the country ranks seventh in the region in terms of population. Yet it offers one of the region's most connectivity-rich and business-friendly environments, both of which were crucial for multinational cloud providers looking to enter the region.

In August 2019, Huawei opened its first datacenter in Chile, consequently launching a new cloud region in the country and the company’s first in Latin America. Huawei announced its cloud region in Chile at the Huawei Cloud Chile Summit 2019, where the corporation also announced Huawei Cloud Partner Network. HCPN enlisted 36 partners in Latin America in that same year. One of its major regional partners was Telefónica SA, with the Spanish telco using the Huawei cloud to offer cloud services across many of the region's countries, including Chile.

Despite its relatively early start, cloud has also grown tremendously in Chile since early 2020. Global cloud providers, previously rumored to be interested in the country, announced their entry into the market in full swing in recent years. Most notably, in December 2020, Microsoft launched its Transforma Chile initiative, which the company dubbed its "most significant investment in its 28-year history in the country," establishing a datacenter region in the country and bolstering its local cloud offerings. That same month, Oracle brought online its Chile cloud region, citing strong customer demand for cloud services as the main factor behind the decision to enter the region.

Subsequently, Alphabet Inc.'s Google also unveiled plans for a cloud region in the country, which officially went live in December 2021. In July, details emerged online for a planned Amazon.com Inc.'s AWS cloud region in Chile, including a $205 million datacenter development.

Brazil: A large yet challenging industry

Top global public cloud providers like AWS, Microsoft Azure and Google have been active in Brazil for years using leased datacenters in the country. Public cloud services are commonly used in Brazil, so in addition to offering their own cloud services, many colocation providers choose to partner with the hyperscalers.

Despite a seemingly promising market opportunity for the cloud, Brazil still faces notoriously expensive cloud services, largely attributable to heavy taxation. How taxation is applied to these services is not clear-cut, and tight regulation appears to be lacking, but under existing laws, use of cloud computing is likely viewed as a license of software or provision of services. In either of those scenarios, numerous taxes are levied when they are consumed from a foreign provider that has a physical presence in the country, and taxes will depend on factors such as revenue, price of the service and profits generated in Brazil. General challenges of doing business and infrastructure costs also contribute to higher prices. As a result, customers in Brazil and other Latin American countries without low-latency requirements may opt for platforms housing their infrastructure in other countries, including the U.S.

Despite its obstacles, the country also saw renewed interest from the global cloud industry due to the circumstances of the pandemic. Oracle entered the market in 2020 with its first cloud region in São Paulo. Only a year later, in May 2021, the provider announced a second cloud region in the nearby city of Vinhedo, underscoring growing customer demand for cloud services and furthering its presence in the nation as a dual-region, disaster recovery provider, allowing customers to bring over critical workloads to Oracle Cloud.

IBM also launched its first Latin American multizone cloud region in Brazil, announcing the expansion in March 2021, highlighting the increasing levels of hybrid cloud adoption in the area as the major factor behind the new region. In November 2021, Tencent Cloud opened its first datacenter in Brazil, entering the market due to increased demand for digital services and hoping to connect Brazilian and other Latin American businesses to opportunities in China and the broader Asia-Pacific region.

Mexico is perhaps the clearest example of the recent cloud boom witnessed by Latin America's tech industry. Despite its fairly large population of 130 million, the second-highest in the region, the country was home to a relatively quiet cloud sector, as global players opted to keep their Latin American infrastructure solely in Brazil and service the Mexican market from the U.S. With the need for proximity to the end user, however, Mexico started making more sense as a location for cloud providers active in the region. The country emerged as another major tech destination in Latin America, which one might expect considering its size, and completed the triad of markets most providers consider the most significant in the region.

A major cloud development came weeks before the outbreak of the pandemic. Microsoft unveiled plans for a Mexican cloud region in February 2020, part of a five-year, $1.1 billion plan to accelerate the country's digital transformation. Microsoft's "Innovate for Mexico" plan sought to offer the company's cloud products — including Microsoft Azure, Office 365, Dynamics 365 and the Power Platform — to public entities and enterprises, as well as the general Mexican population. The decision was impacted by the major global event that soon followed: Only a month later, COVID-19 made its way to Mexico and the government ordered lockdowns, which further boosted demand for digital services. In March 2021, it was announced that Microsoft had selected the city of Querétaro for its cloud region, drawing an influx of datacenter activity to the region. Amazon CloudFront had also previously announced plans for two edge locations in the city. Despite not entirely falling into hyperscale developments, as Amazon Web Services had not yet announced an official entry into Mexico, the news rekindled speculation that other cloud providers would soon also plan new cloud regions in the country.

In August 2021, Oracle confirmed a cloud region in Mexico, which it launched in Querétaro in June. This became the firm's fourth cloud region in Latin America, complementing its two cloud regions in Brazil and one in Chile. Although details on the new facility have not been announced, company leadership has mentioned one of its objectives for the region is working with telcos on 5G private network projects. Additionally, Huawei opened its second cloud region in Mexico in October 2021. Most recently, this past July, Google also unveiled plans for a Mexico cloud region, part of a $1.2 billion commitment to expand Latin America's digital infrastructure. Although some of these new developments have yet to be launched, the excitement around the local industry is palpable, with Mexico now on the map of global cloud and datacenter players alike as they consider new growth opportunities in the region. 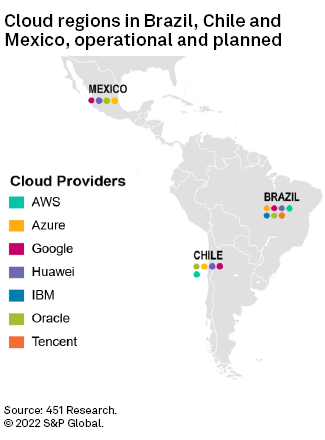 Colombia: The next frontier?

Colombia could also emerge as a potential cloud destination in the region. In July, Oracle became the first major cloud provider to announce a cloud region for the country. The provider unveiled a partnership with local telco Claro to offer Oracle Cloud Infrastructure services to public and private sector clients in Colombia. Claro, a subsidiary of Mexican group América Móvil SAB de CV, will house Oracle's infrastructure in the country, in its Triara Data Center in Bogotá. In August, Claro announced it would be investing $25 million to refurbish the facility and house the cloud service provider.

Other cloud providers have hinted at their interest in building a presence in Colombia. In September, during Huawei's Cloud Summit in Rio de Janeiro, company leadership discussed plans to build a physical presence in the country to host its cloud infrastructure. Huawei is expected to launch a new cloud point of presence in Colombia in the fourth quarter of 2022. With an uptick in demand during the pandemic, cloud service providers look to establish their infrastructure closer to end users, and Colombia provides a central location to service not only its local population but possibly also those in neighboring countries like Peru, Panama, Ecuador and Venezuela — smaller nations that present higher levels of economic instability.