An analysis of 100-meter hourly wind speed data shows most Western U.S. states, the Texas Panhandle and western Oklahoma experienced below 20-year average speeds in the third quarter. U.S. wind energy capacity leader Texas recorded wind speeds 2.5% below the norm. In Iowa, where wind accounts for more than 50% of the state's generation fleet, wind speeds positively deviated 0.9% from the 20-year average. Storm Fiona contributed to sizable wind speed deviations in the Canadian Provinces of Nova Scotia and Prince Edward Island, up to 5.0% and 5.7%, respectively. Seventeen of the top 20 companies by wind capacity owned in North America logged negative deviations.

Wind speed potential deviations can impact company profits. NextEra Energy Inc., for example, reports that a 1% change in their wind production index causes a 1-cent change in their earnings per share. 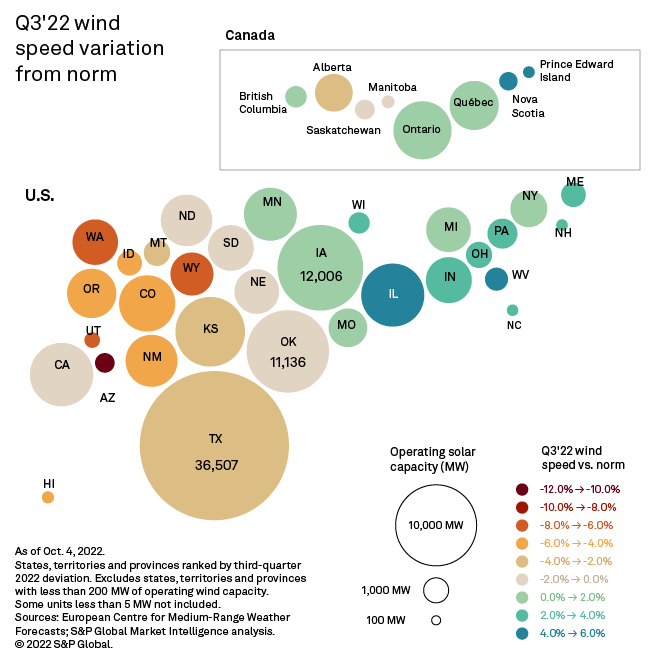 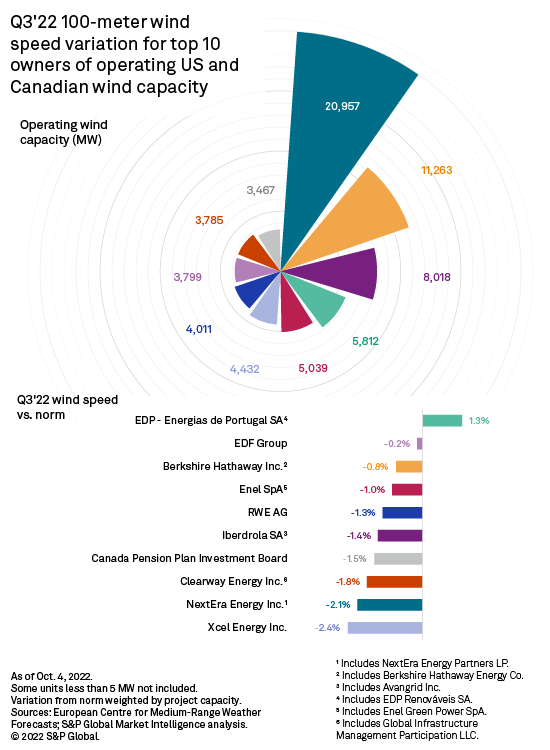 Alliant Energy, second to EDP in terms of deviation against the 20-year norm, happened to have its top wind speed projects located in Iowa, Minnesota and Wisconsin — states with better-than-average wind speeds this quarter. About 1,454 MW, or 77%, of its total capacity, is in Iowa. Alliant's 225-MW Great Western Wind Project in Oklahoma, co-owned with EDF Group, is the company's project with the lowest average wind speed —5.6% below the 20-year average.

Algonquin Power & Utilities, the only other top 20 company with an above-average wind portfolio, has 16 projects totaling 2,023 MW that vary positively from the norm. The company's Shady Oaks Wind in Illinois is its top wind speed project, with average wind speeds at 4.7% above the 20-year average. Only 1,103 MW of Algonquin projects vary negatively from the norm. The largest negative deviation is 5.2% below the 20-year average at the company's Texas-based 492-MW Maverick Creek Wind Project. 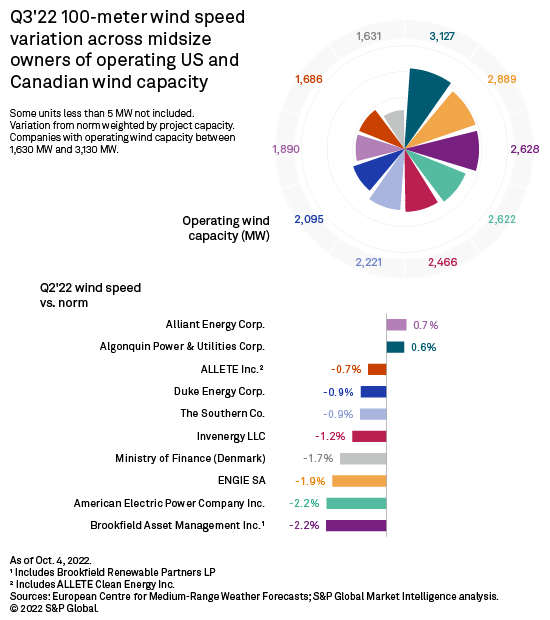 NextEra Energy continued to dominate the list of capacity ownership in the U.S. during the third quarter at 19,957 MW, followed by Berkshire Hathaway Inc., which owns 11,263 MW of wind capacity. Both saw a decline in their portfolio average wind speeds, with negative variations from the 20-year norm of 2.1% and 0.8%, respectively. NextEra generally reports that a one percent change in their wind production index causes a 1-cent change in their earnings per share.

New Mexico is home to 4.4 GW of operating wind projects and had a third-quarter wind speed deviation 5.5% below the state's 20-year weighted average. The La Joya Wind Plant, owned by Iberdrola, has power purchase agreements with the Public Service Co. of New Mexico for $27.92/MWh and $17.48/MWh. Its negative 8.6% deviation this quarter could have monetary impacts on Iberdrola.