Though U.S. insurtech companies are focused on trimming expenses these days, startups in the property and casualty space are still spending on one type of acquisition: Buying licensed carriers that are no longer writing business. These entities, which are sometimes referred to as clean shells, allow the insurtech company to underwrite its own policies. 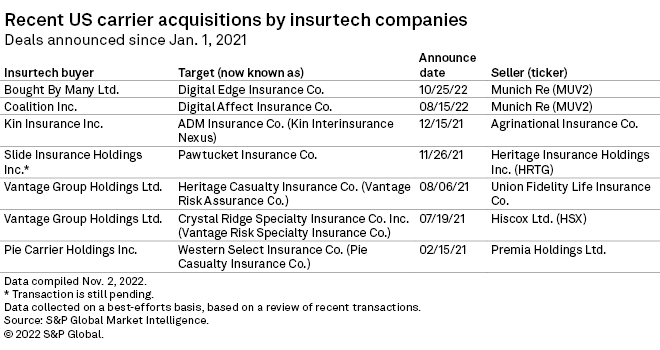 Shell deals tend to be relatively small in size — Root Inc. paid only $23 million for one — and offer several advantages, which is likely why buying them remains a strategic priority for insurtech companies. By having its own carrier, the insurtech can capture more revenue and control the entire underwriting process. In a partner model, the insurtech only receives a commission as the broker for the policies and is beholden to quoting and claims handling technology of its partner. Another major advantage of a shell acquisition is the ability to expand geographically.

Insurtechs have been doing these types of deals for years. But it remained to be seen whether this trend would continue, due to the belt-tightening many insurtech startups have undertaken and the lackluster underwriting performance of others that have gone this route, as described in our 2022 U.S. Insurance Technology Market Report.

Kin Insurance Inc., a homeowners-focused insurer with a specialty in catastrophe-prone regions, illustrates how a shell deal can open the door to geographic expansion. Kin already had a licensed carrier — Kin Interinsurance Network — that it formed in 2019. But Kin Interinsurance Network is only permitted to write in two states: It is licensed in Florida and is eligible, on a surplus lines basis, to write in Louisiana. Kin also offers insurance in California through a partnership with Falls Lake Fire & Casualty Co., a unit of James River Group Holdings Ltd.

With its shell deal, Kin Insurance now has licenses to write in many more states. The shell Kin Insurance acquired, which it renamed Kin Interinsurance Nexus, had 43 state licenses as of June 30, including all the Gulf Coast states. It is not licensed in California, however, so the Falls Lake partnership seems likely to stay in place. 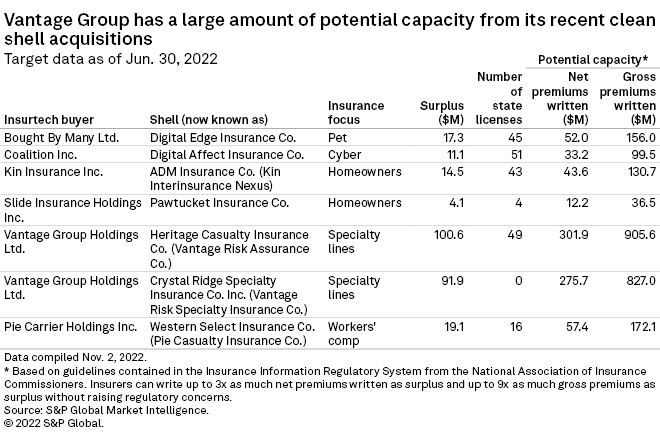 Vantage Group Holdings Ltd., a specialty insurer and reinsurer, was off to the races after acquiring Crystal Ridge Specialty. The unit, now known as Vantage Risk Specialty Insurance Co., wrote $52.2 million in direct premiums in the second quarter of 2022, only four quarters after acquisition. About 41% of its total came from other liability lines, including both claims-made and occurrence, and the remainder was other commercial lines. Vantage Group acquired another shell, which it rebranded Vantage Risk Assurance Co., but it only wrote $1.9 million in the second quarter. 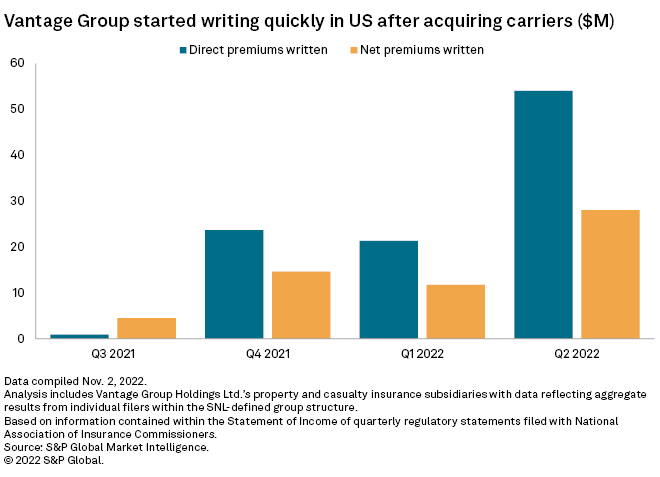 The Vantage Group shells are well-capitalized, with a combined surplus of $192.5 million as of June 30. Per our calculations, Vantage Group could write up to $1.73 billion in gross premiums and still stay within regulatory guidelines from the National Association of Insurance Commissioners.

It might be difficult for an insurtech to find a shell to acquire given heightened demand, but Munich Re recently made this process a lot easier for two companies by selling its own shells. It sold Digital Affect Insurance Co. to cyber insurer Coalition Inc. and Digital Edge Insurance Co. to pet insurer Bought By Many Ltd., now known as ManyPets. ManyPets is one of the portfolio companies of Munich Re Ventures, and therefore the deal was not surprising. But Coalition is not, and Munich Re Ventures invested in one of its competitors, At-Bay Inc., which we would have expected to be the buyer instead.

At-Bay might be content to remain a digital agency, but we suspect it has ambitions to go full stack, as it has already formed a captive insurance company. Based on its history, Munich Re could be a potential buyer of At-Bay as it did so previously with two Munich Re Ventures portfolio companies. It purchased Relayr GmbH, a provider of internet-of-things solutions for industrial clients, and bought the assets of Zeguro Inc., a cyberrisk management company. Munich Re's HSB Specialty Insurance Co. wrote $94.5 million via At-Bay in the first half of 2022.

Following the Digital Affect and Digital Edge deals, Munich Re Digital Partners has two units left in its U.S. holding company, based on its corporate structure as of June 30: American Digital Title Insurance Co. and Digital Advantage Insurance Co. Digital Partners is the name for Munich Re's division that helps incubate insurtechs, providing capacity, technology and expertise to startups.

It is unclear whether American Digital Title and Digital Advantage are also available for sale. American Digital Title is currently being used to write business for Spruce Holdings Inc., a Munich Re Ventures portfolio company offering title insurance. As such, we could envision Spruce buying the unit at some point.

Digital Advantage seems to act as a reinsurance intermediary; it assumes business from carrier partners and has a 100% quota share with reinsurer Munich Re America. It reported only a small amount of direct premium in the second quarter of 2022, but the company said at the end of 2021 that it plans to write direct business "once strategically feasible."

From the point of view of a tech company, going full stack makes sense strategically. It offers the chance to compete directly with incumbents and, perhaps, create meaningful industry disruption. But operating a carrier can be tricky business, as startups have found. Lemonade, Metromile Inc. and Root have all had licensed carriers for some time, and, of those, only Lemonade Insurance Co. has managed to book annual net underwriting gains, on a statutory basis, in one of the years from 2016 to 2021. Lemonade now owns Metromile, after closing a deal to acquire the company in July.

The fact that so many digital agencies have converted to full-stack companies raises doubt, in our view, about whether remaining a digital agency is a viable long-term option. Insurtech startups have traditionally spent large amounts on advertising to acquire new customers, which has led to big net losses on the bottom line. Capturing more revenue from policy sales would definitely help offset those losses. But we think companies, both digital agencies and full stack alike, will increasingly pull back on marketing expenses. This should reveal which business models are strong enough to grow through word-of-mouth, superior products and competitive pricing.