The onset of the COVID-19 pandemic quickly eroded the optimism about prospects for M&A activity among insurance carriers and distributors that had previously been accelerating.

Blockbuster early March transactions involving the since-terminated sale of PartnerRe Ltd. to SGAM Covéa and the combination of Aon PLC and Willis Towers Watson PLC may have represented a last gasp of activity before the full breadth and spread of the pandemic on financial markets, the macroeconomic outlook and day-to-day life took hold. Rather than a sign of things to come, the transactions may stand as symbols of what could have been.

S&P Global Market Intelligence revised its full-year 2020 outlook for carrier transactions where the buyer and/or target is headquartered in the United States or Bermuda to reflect experience in past periods of broad economic stress. We selected the nine-month periods following the events of 9/11 and the bankruptcy filing of Lehman Brothers Holdings Inc. as times in which prospective buyers paused to preserve capital and gain additional clarity on the future business environment.

The resulting full-year outlook for aggregate deal value of between $6.3 and $8 billion, excluding managed care targets and terminated transactions, implies a range of decline relative to 2019 activity of between 59.8% and 67.9% to what would be the lowest inflation-adjusted tally since 2004. The projected retreat would be even more significant when looking specifically at the outlook for the last eight months of 2020 at as much as 85.9% relative to the same stretch in 2019. 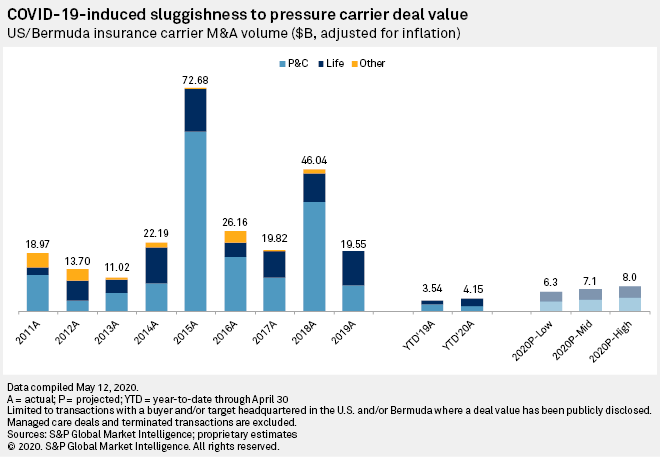 As of May 7, there has not been a carrier transaction meeting our criteria with a publicly disseminated deal value announced since March 12. Arguably the most significant transaction revealed during that period, Aflac Inc.'s March 19 agreement to purchase the U.S. corporate life and pensions business of Zurich American Life Insurance Co. by way of indemnity reinsurance, did not have a price tag attached.

Deal activity involving U.S.-based broker and agency targets has continued in recent weeks, but at a much slower pace than we have come to expect in an area that had served as a steady source of consolidation for the better part of the past two decades.

Through the end of April, the number of transactions in that sector this year fell by 29.7% from the comparable period in 2019 to 166, based on data compiled May 7. The rate of decline in the month of April, however, was far more dramatic, falling 53.2% year over year to just 22 deals. That was the slowest April for broker/agency deal-making since 2013 when the sector was continuing to emerge from a pull-forward effect of the expiration of a more favorable long-term federal capital gains tax rate at the end of 2012.

A number of factors favor the secular trend of continued consolidation within the distribution space, and the pandemic could accelerate that push over the longer term. Challenges associated with maintaining continuity of operations, the evolution of carrier relationships, the economic downturn disrupting previously stable books of business, and the need to lean on the resources of a larger organization in a time of stress could eventually lead more agency owners to consider selling.

More immediately, however, our outlook presents three scenarios for full-year deal counts to reflect 1) a prolonged drought where activity is consistent with April levels through the balance of 2020, 2) a fourth-quarter recovery in the level of activity to the first quarter's pace, and 3) a more accelerated recovery to a pace consistent with the 2019 quarterly average by the fourth quarter. The net results would all reflect double-digit percentage declines in activity from 2019's near-record pace in a range from nearly 19% to 45.9%. The best-case scenario would represent the largest year-over-year decline in activity since 2013; the mid- and low-end scenarios would reflect the biggest drops on record since S&P Global Market Intelligence initiated coverage of the sector in 1997, surpassing the previous low-water mark of 33.4% in 2009.

There are any number of impediments to carrier M&A activity in the near-term, ranging from prospective acquirers' relative valuations to the inability to physically shake hands in a time of social distancing.

American International Group Inc. Executive Vice President and CFO Mark Lyons spoke for his company and many of its peers during a May 5 conference call when he described liquidity and operating subsidiary capitalization as "paramount" under the uncertain economic circumstances. Lyons said that AIG, like a number of insurers, does not plan to engage in share repurchases for "the foreseeable future," and the company filed for a sizable debt issuance.

Many commercial lines carriers opted to post reserves for COVID-19 claims in their first quarter earnings reports, and the industry faces the potential for years of litigation as policyholders challenge virus exclusions for business interruption coverage in commercial property coverage both directly and through a push for legislation to invalidate the relevant contractual language at the state and federal levels. While claims on property policies generally are regarded as having a short tail, the industry's experience in navigating business interruption claims in the aftermath of 2012's Superstorm Sandy might suggest otherwise — and that was a scenario with limited geographic reach.

Professional liability insurers, who already had been wrestling with the effects of social inflation on the volume of litigation and the size of jury awards, also face the prospect of defending customers against an onslaught of new complaints.

Macroeconomic challenges create questions anew about the outlook for top-line growth from renewals and new sales as employer payrolls dramatically contract and the nature and amount of miles driven changes.

To the extent acquirers remain willing and able to pursue deals in the current environment, challenges associated with conducting due diligence beyond virtual data rooms and other remote means of access provide further complications. This may serve as a particular impediment given the importance of performing deep dives on risks associated with underwriting, investments and the effectiveness of business continuity plans.

"People are trying to understand their own situations, much less take on somebody else's situation," said Lincoln National Corp. President and CEO Dennis Glass during a call. "So big picture, M&A, I think, is chilled for the moment." Principal Financial Group Inc. predicted that opportunities that may have been slated for 2020 would be pushed back to 2021.

Executives at Athene Holding Ltd., which has access to a war-chest to pursue inorganic growth and a history built on post-financial crisis dislocation, offered a more upbeat outlook for its near-term activity, though President William Wheeler cautioned during a call that the pandemic may be affecting the ability or desire of certain counterparties to transact.

Acquirers will be eager to dust off their post-financial crisis playbooks given the potential for history to repeat itself, with the emergence of highly motivated and/or distressed sellers as well as the potential for new properties to come onto the marketplace as current owners rethink their previous strategies. Allstate Corp., for example, recently reiterated its interest in the reinsurance or sale of its annuities block, which Chairman, President and CEO Thomas Wilson said is a "huge drag" on the company's return on equity.

Outside of the emergence of some unique circumstances such as sales driven by financial circumstances, technological constraints or regulatory decrees, our outlook presumes that it will be next year before buy-side and sell-side interests converge to the point where broad-based deal-making resumes.

A 'lull' in agency deals

A temporary lockup in leveraged finance markets could limit near-term activity among certain of the private equity-backed brokers that accounted for more than half of broker/agency M&A activity during the past two years.

The Hellman & Friedman LLC-backed Hub International Ltd., which had in excess of 100 U.S. broker/agency deals to its credit from 2017 through 2019, went two months without announcing a transaction. That was its longest such drought since early 2013. Other PE-backed brokers remained active, though their aggregate level of activity compared unfavorably to the first four months of 2019.

"For the next few months at least, we expect there will be a slowdown in M&A activity due to the uncertainty around the future performance of businesses and what this might mean for sellers' valuation," said J. Powell Brown, president and CEO of the publicly traded Brown & Brown Inc. during a call.

At Arthur J. Gallagher & Co., Chairman, President and CEO J. Patrick Gallagher Jr. said his company is not in capital-preservation mode, but he expects "a bit of a lull" in M&A activity due to it being "a bit tough to get through due diligence." He observed that competition for acquisitions had slowed "a bit" with could have the effect of rationalizing deal multiples. Gallagher further predicted that pandemic-related uncertainty could cause buyers to structure deals in a way that places greater emphasis on earnout component of the total consideration.

The company had an M&A pipeline of about $200 million of prospective target revenue associated with over 30 term sheets either agreed upon or being prepared, Gallagher said. But that is only about one-half of the size of the pipeline the company referenced in December 2019. 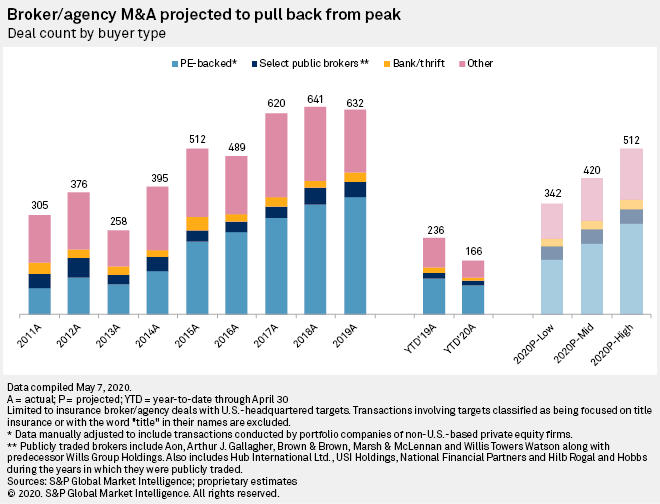