S&P Global Market Intelligence's Pipeline Activity Index, or PAI, increased only slightly in August; however, it remained near the 20-month low in July. An increase in significant financings and drill results offset the decline in positive project milestones and junior and intermediate financings.

The gold PAI continued to fall, dropping one point to a 26-month low of 143, while the base/other metals PAI increased, also by one point, from 80 in July to 81 in August.

The PAI measures the level and direction of overall activity in the commodity supply pipeline by incorporating into a single comparable index the significant drill results, initial resource announcements, significant financings and positive project development milestones.

Detailed data on the PAI metrics is available in the accompanying Excel spreadsheet.

Total raised down, number of financings up

Most notable for August, funds raised by junior and intermediates slid 21% to US$709 million, a new low since May 2020, despite an overall higher number of financings — 186 compared with 174 in July. Lower gold financings led to the decline despite increases in funds raised for base/other metals and specialty commodities.

Significant gold and base/other metals financings — transactions valued at US$2 million or more — which we use in our PAI calculation, increased to 55 from 50. There were no transactions valued at more than US$100 million, compared with one reported in July and three reported in June. The average offering amount fell to US$8.6 million from US$15.75 million in the previous month. 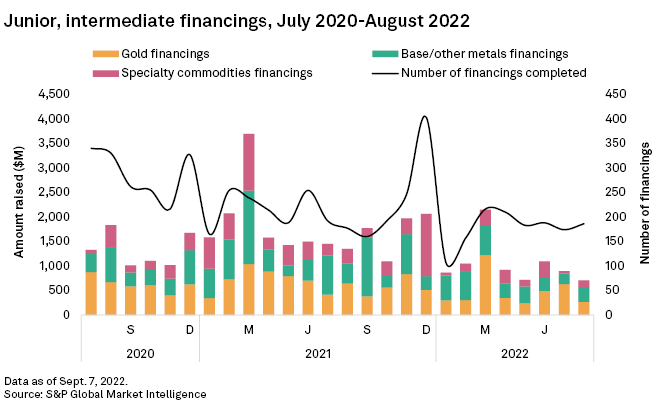 Gold financings fell 58% month over month to US$265 million, slightly higher than the recent low of US$237 million in May. The number of gold transactions was down by one, to 112. Equity offerings accounted for 98% of August's gold fundraisings, with the remainder from initial public offerings and debt.

The base/other metals group increased 34% to US$290 million after falling to a 27-month low of US$216 million in July. The number of transactions increased to 53 from 43.

Separately, funds raised for lithium jumped 257% to US$60 million from just US$17 million in July — the lowest in over two years. Funds raised for rare earth elements accounted for the largest boost, at US$81 million compared with zero in July.

August's largest gold financing and the third largest overall was the A$54 million, or US$37 million, second-tranche follow-on offering by Australian Securities Exchange-listed Genesis Minerals Ltd. that started in July. The company has started feasibility studies at its fully owned gold-silver Ulysses project in Western Australia and is planning to report a maiden mineral reserve estimate in 2023. In July, Genesis recently announced an offer to acquire Dacian Gold Ltd., valued at A$125 million. Dacian Gold Ltd. owns the Mt Morgans gold mine in Western Australia.

August's largest base/other metals financing, and the largest overall, was the US$82 million equity offering by McEwen Copper Inc., a fully owned subsidiary of NYSE-listed McEwen Mining Inc. The company sold 8 million common shares, priced at US$10 per share, to new investors Evanachan Ltd. and Victor Smorgon Group. McEwen will use the proceeds for pre-feasibility studies, construction of facilities and exploration drilling at Los Azules and Elder Creek projects in Argentina and Nevada, respectively.

Detailed information on junior and intermediate financings completed in August is available in the Financings article in this series.

The number of distinct drillholes receded further in August by nearly 30% to 4,059, marking a 20-month low. When looking at drilling projects, however, activity recovered slightly in August, with a total of 341 projects drilled — only 3% more than the 19-month record low of 330 in July. 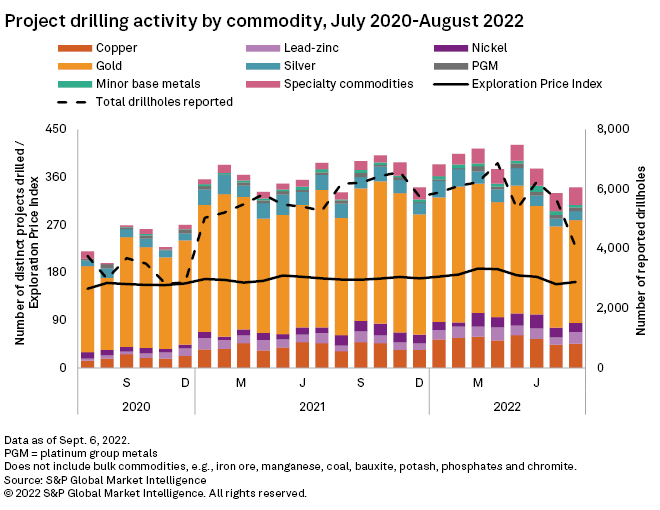 Gold projects increased a marginal 2%, to 194 from the record low of 191 in July. Among major base metals projects, lead-zinc increased 57%, to 22 from 14, copper increased 5% to 46 and nickel fell 6% to 17 projects. Specialty commodities were virtually unchanged month over month with 33 projects reporting.

By country, Australia remained on top with the most projects drilled in August, despite a 9% decline month over month to 122 projects. Canada closed in with a 30% increase, to 82 projects — a recovery from a 20-month record low in July. The U.S. surged 43% to 33 projects.

The top drill result for August came from TDG Gold Corp.'s Baker gold project in British Columbia, with a 119-meter intersection grading 94.5 grams of gold per tonne. TDG Gold also conducted reassays from a 2021 diamond drill program, which resulted in an 8.9% increase in the project's gold grades. Agnico Eagle Mines Ltd. reported the most drillholes in August, with a total of 226 scattered across its Canadian gold mines of Macassa, Hope Bay, Canadian Malartic and Detour Lake. The company's drilling activities for the month are for extension purposes, supporting a long-term goal of increasing production in key gold mines.

In line with the increase in the number of projects reporting drilling, the number of significant drill intersections — used to calculate the PAI — also increased in August, to 191 from 186 in the previous month, with gold accounting for the entire increase.

Detailed information on all drilling activity in August is available in the Drill Results article in this series.

The number of initial resource announcements was on par with July, coming in at four; three resources were for gold projects and one was for a copper project. 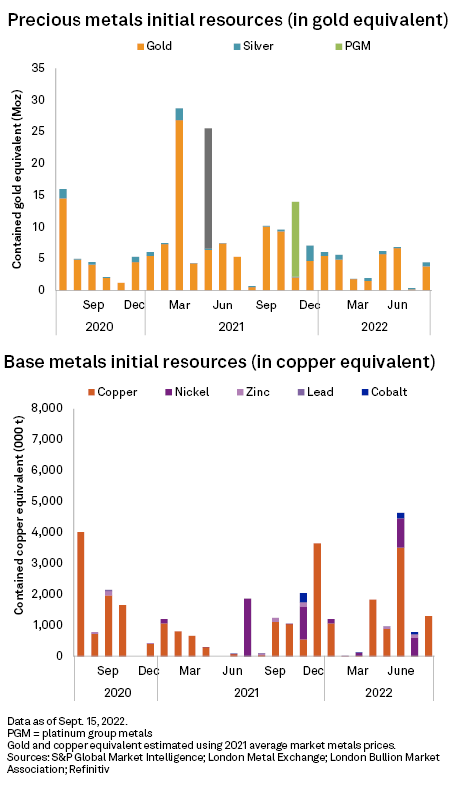 Positive project milestone activity was down in August, to only two from six in July. There was also one negative milestone. 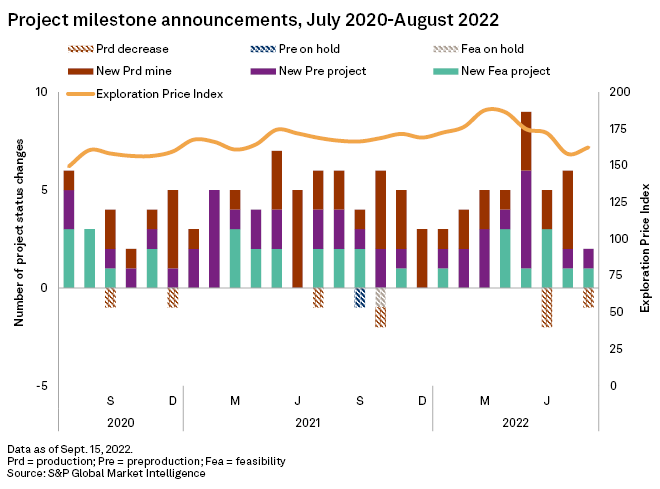 August's positive milestones were both for gold, with one project entering feasibility and the other entering the "preproduction-construction planned" stage. One negative milestone was recorded — a base metal project moving to care and maintenance.

In the month's largest milestone, U.K.-based Hochschild Mining PLC announced that its Mara Rosa gold project, located in Goiás, Brazil, was granted the key permit by the state's environmental authority to start constructing the processing plant and mine pre-stripping. The permit, issued by the State Secretariat for the Environment and Sustainable Development, also allows the construction of all the required site infrastructure for progressing the project's critical paths.

Vancouver, British Columbia-based Trevali Mining Corp. was August's only negative milestone. After reviewing its operations, Trevali announced its Caribou Zinc mine in New Brunswick was placed on care and maintenance due to "operational and financial challenges."

Metals prices increased in the month of August, raising S&P Global Market Intelligence's Exploration Price Index, or EPI, to 162 from 158. The indexed price rose for six of the eight constituents of the index — gold, silver, platinum, copper, zinc and nickel — and decreased for cobalt and molybdenum. 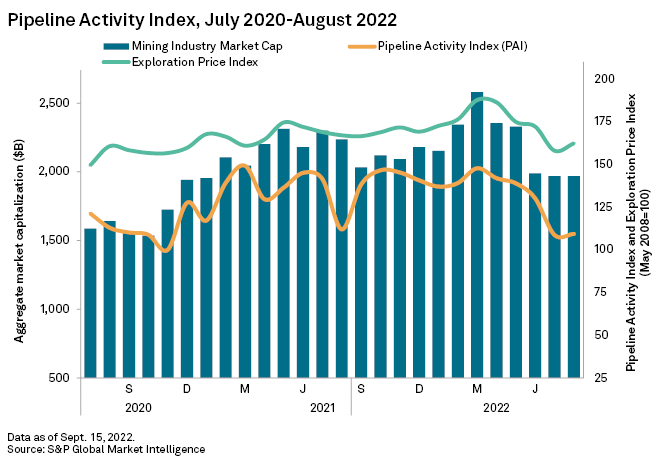 After declining for four consecutive months, mining equities stabilized in August, as Market Intelligence's aggregate market value of the industry's listed companies, based on 2,409 firms, increased only marginally to US$1.97 trillion, up approximately US$600 million compared with July. The aggregate market cap of the industry's top 100 companies increased, to US$1.62 billion from US$1.61 billion in July.