Colorado-based Newmont Corp. reclaimed the title of world's largest gold producer in 2018 as rival and partner Barrick Gold Corp.'s output fell by over 800,000 ounces. Following Newmont's $10.01 billion acquisition of Goldcorp Inc. in 2019, its lead over Barrick grew to more than 1.5 million ounces in 2021, despite Barrick's acquisition of Randgold Resources in January 2019. 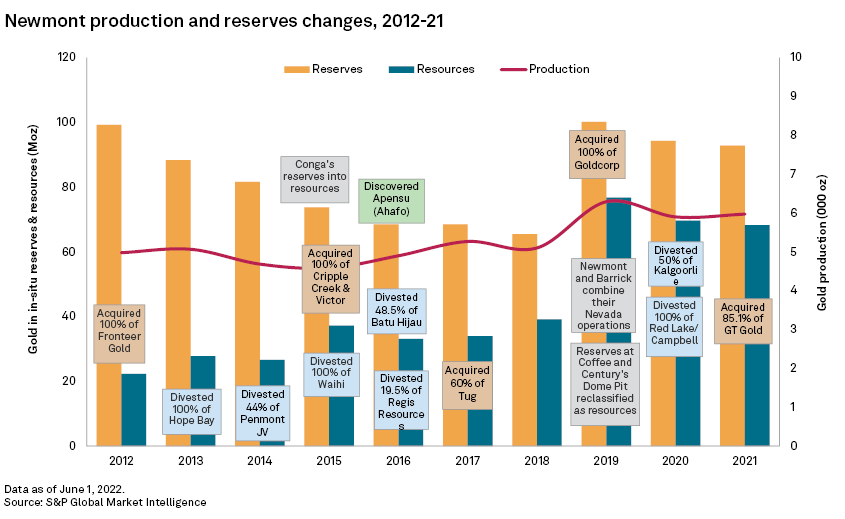 Our analysis of Newmont's strategies is based on a detailed compilation of its activities over the 2012-21 period, part of the Strategies for Gold Reserves Replacement study, which includes analysis of the world's top five gold producers in 2021. These compilations show the relationships between each company's production, reserves, costs, exploration budgets, acquisitions, divestitures and gold discoveries during the period. 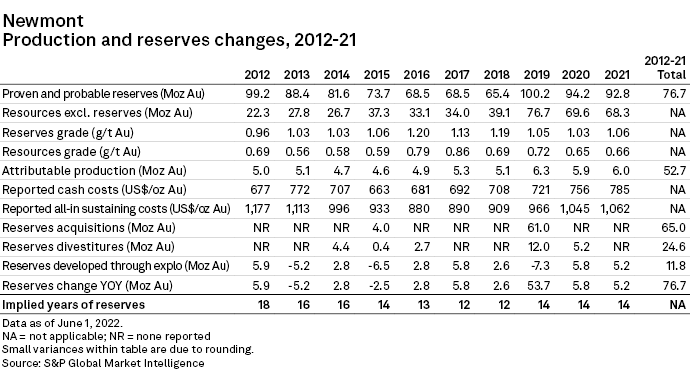 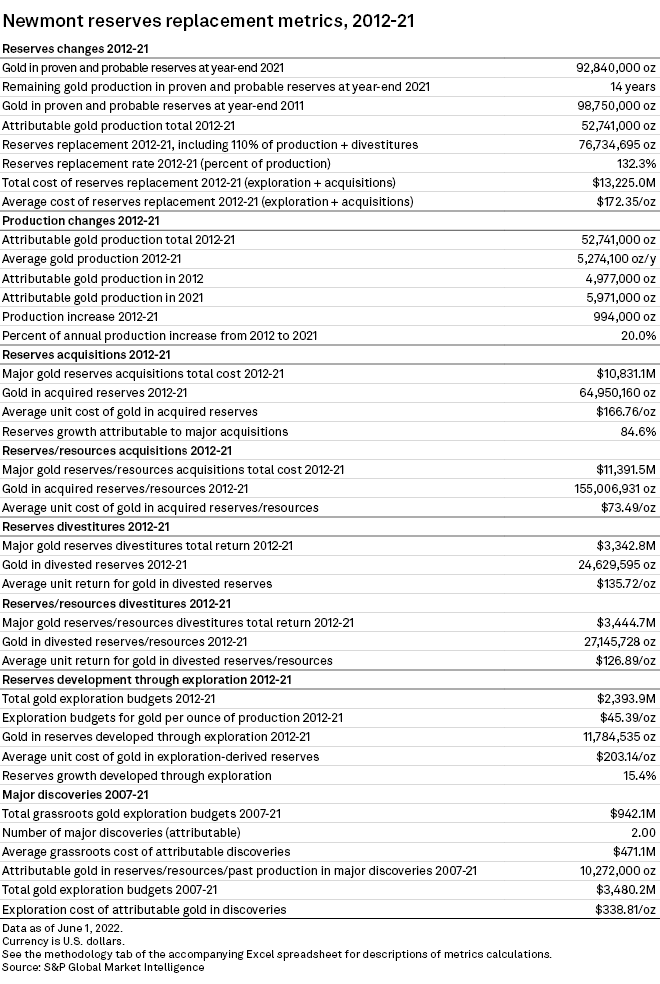 In 2019, Newmont increased its gold reserves by 53% through the Goldcorp acquisition, the formation of the Nevada Gold Mines joint venture with Barrick and the continuation of its exploration program. In December 2019, the company reported 100.2 Moz of reserves; the subsequent disposal of its 50% interest in the Kalgoorlie super pit in Australia and its wholly owned Red Lake operation in Canada in the first quarter of 2020 has lowered its total reserves to 92.8 Moz of gold in 2021. From 2012 to 2021, Newmont added 76.7 Moz to reserves, replacing 132% of its total gold production during the period. Almost 85%, or 65 Moz, of the replaced reserves were acquired.

Founded in 1921, Newmont became the world's largest gold producer in 2002 when it completed a $4.4 billion three-way merger with Normandy Mining Group and Franco-Nevada Mining Corp. It held this distinction until Barrick acquired Placer Dome Inc. in 2006, slipping into third place behind AngloGold Ashanti Ltd. in 2007, before retaking the number-two position in 2009 and finally the top spot in 2018.

Faced with declining grades at its mature operations, Newmont has increasingly turned to acquisitions and joint ventures to bolster its reserves and resources base and its production profile. Over the 2012-21 period, Newmont spent $10.83 billion to acquire 65 Moz of attributable reserves, at an acquisition cost of just $166.76/oz. In 2015, it completed the acquisition of AngloGold's Cripple Creek and Victor mines in Colorado for $820 million. 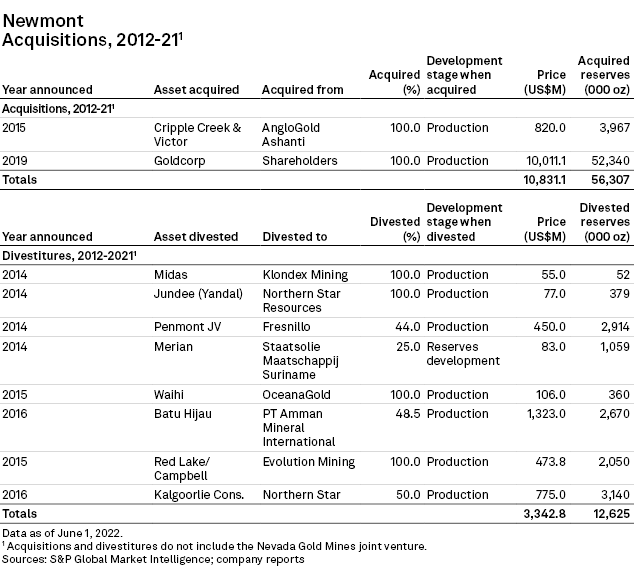 In February 2019, Barrick announced a $17.8 billion hostile takeover bid for Newmont. Newmont rejected the overture, opting instead for its previously announced plan to acquire Goldcorp. Completed in April 2019, Newmont's $10.01 billion all-share acquisition of Goldcorp was the largest merger of primary gold miners in history.

In March 2019, Barrick withdrew its offer for Newmont and the two companies announced an unexpected agreement to combine their Nevada operations. With Barrick holding a 61.5% interest as operator and Newmont taking the remaining 38.5% stake, the Nevada Gold Mines joint venture is the world's largest gold-mining complex, at least twice the size of the next-largest operation. Newmont contributed its Carlin, Twin Creeks, Phoenix, Long Canyon and Lone Tree projects, while Barrick brought its Goldstrike, Cortez, Turquoise Ridge, Goldrush and South Arturo properties to the joint venture.

Over the past 10 years, Newmont has divested a number of higher-cost assets, including Midas in Nevada, Jundee in Western Australia, Penmont in Mexico (including the Herradura, Noche Buena and Soledad and Dipolos mines) and Waihi in New Zealand. In June 2016, it agreed to sell its 48.5% interest in the Batu Hijau copper-gold mine in Indonesia to PT Amman Mineral Nusa Tenggara for $1.32 billion.

Following the Goldcorp acquisition, Newmont said it would target between $1.0 billion and $1.5 billion in divestitures to optimize gold production at a sustainable, steady-state level of 6-7 million ounces per year. In November 2019, the company announced it would sell the Red Lake operation in Ontario to Evolution Mining Ltd. for $474 million, and the following month it agreed to sell its 50% interest in the Kalgoorlie super pit to Northern Star Resources Ltd. for $775 million. The two deals, representing 5.2 Moz of attributable reserves, closed in March 2020 and January 2020, respectively.

Newmont has traditionally considered itself a grassroots exploration company; company geologists discovered almost all of its producing deposits. While it has reduced its total exploration budgets 49% since 2012, Newmont continues to view exploration as one of its core capabilities. 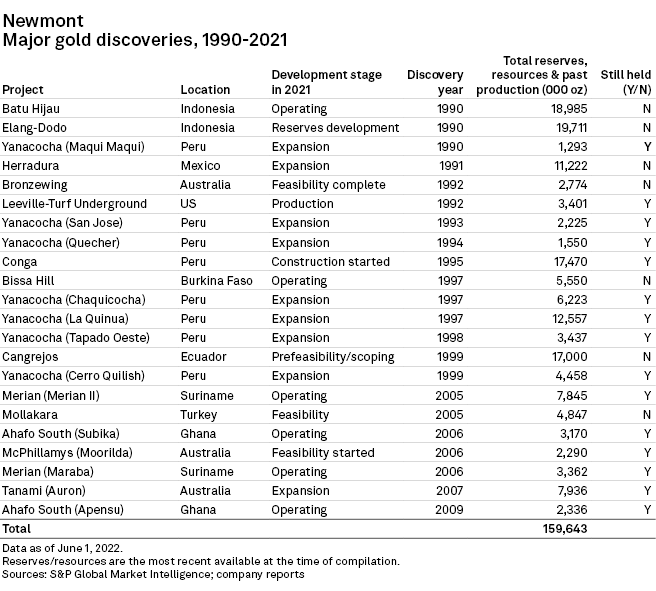 For a detailed look at all the major gold finds over the past 10 years, please see Gold RRS 2022 — Surge in recent discoveries.

Following the successful acquisition and integration of Goldcorp and the formation of the Nevada Gold Mines joint venture, Newmont nearly doubled its market capitalization and created an unmatched portfolio of operations, projects, and exploration prospects in top-tier jurisdictions globally. 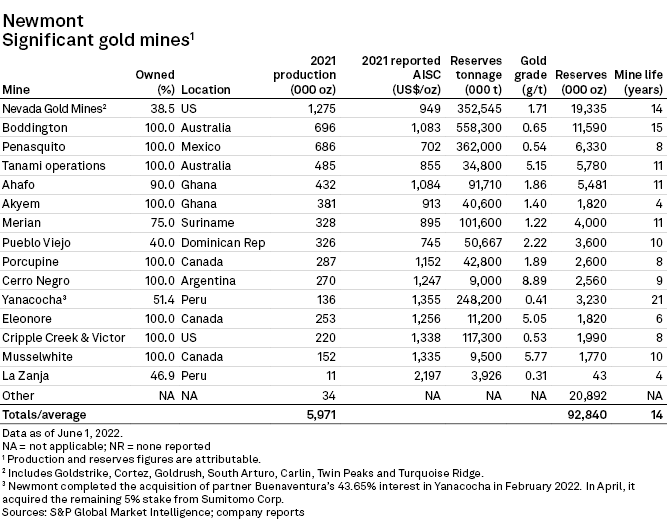 Newmont continues to advance a number of organic growth projects, including the Turquoise Ridge underground expansion and Goldrush project in Nevada, the Tanami Expansion 2 in Australia, the Pamour project at the Porcupine operation in Canada, as well as the expansion of the Cerro Negro district at Yanacocha.

In Nevada, Nevada Gold Mines has outlined initial capex of about $1 billion for the planned Goldrush underground mine; together with the Fourmile deposit, the project will eventually be included in the Cortez mining complex, securing Cortez's future as a tier-one asset.

Also in Nevada, the $300 million-$330 million Turquoise Ridge expansion will nearly double output to more than 500,000oz/y. A third shaft will enable access to new areas of the deposit and is expected to reduce operating costs, increase mining productivity and increase the total life of the mine. Initial production from the new infrastructure is expected in 2022, with sustained production to begin in 2023.

In Canada, the Pamour project will extend the life of the Porcupine operation in Ontario and maintains production beginning in 2024. The project will optimize mill capacity, adding volume and supporting high-grade ore from Borden and Hoyle Pond, while supporting further exploration in a highly prospective and proven mining district. An investment decision is expected in the second half of 2022, with estimated capital costs between $350 million and $450 million.

At its 40%-owned Pueblo Viejo joint venture with Barrick (60%) in the Dominican Republic, a plant expansion and new tailings facility will increase throughput to 14 million tonnes per year and maintain average gold production of about 800,000 oz/y well into the future. The plant expansion is due for completion by end-2022. Once permitting of a new tailings facility is completed, more than 11 Moz of gold will be unlocked, extending production from 2028 to the mid-2040s.

In Peru, the Yanacocha Sulfides project will develop the first phase of sulfide deposits and an integrated processing circuit, including an autoclave to produce 45% gold, 45% copper and 10% silver. The project is expected to add average annual production of 525,000 gold-equivalent ounces per year with all-in sustaining costs between $700 and $800 per ounce for the first five full years of production (2027-31). Total capital costs for the project are estimated at $2.5 billion, with an investment decision expected in late 2022 and a three-year development period. The first phase focuses on developing the Yanacocha Verde and Chaquicocha deposits to extend Yanacocha's operations beyond 2040, with second and third phases potentially extending life for multiple decades.

Also in Peru, the Cerro Negro District Expansion 1 project includes the simultaneous development of the Marianas and Eastern districts to extend the mine life of Cerro Negro beyond 2030. The project is expected to improve production to above 350,000 oz/y beginning in 2024, while improving all-in sustaining costs to $800/oz-$900/oz. Capital costs for the project are estimated at around $300 million. This project provides a platform for further exploration and future growth through additional expansions.

The Tanami Expansion 2 project in Australia will secure Tanami's future as a long-life, low cost producer with potential to extend mine life to 2040 through the addition of a 1,460-meter hoisting shaft and supporting infrastructure to process 3.3 Mt/y and provide a platform for future growth. The expansion is expected to increase average annual gold production by 150,000-200,000 oz/y for the first five years beginning in 2024, and to reduce operating costs about 10%. Capital costs for the project are estimated at $850 million-$950 million, with a commercial production date in 2024.

In Africa, the Ahafo North project in West Africa will expand Newmont's existing footprint in Ghana with four open-pit mines and a stand-alone mill located about 30 kilometers from the company's Ahafo South operations. The project is expected to add 275,000-325,000 oz/y, with all-in sustaining costs of $600/oz-$700/oz for the first five full years of production (2024-28). Capital costs for the project are estimated at $750 million-$850 million, with a construction completion date in late 2023 and commercial production in 2024. Ahafo North hosts 3.5 Moz of reserves and more than 1 Moz of additional measured, indicated and inferred resources, and significant upside potential to extend beyond Ahafo North's current 13-year mine life.

Full funding for the Yanacocha Sulfides project was extended to late 2022 as the project progresses at the pace the pandemic allows. Newmont will invest at least $500 million through 2022 to advance long-lead procurement and critical activities, such as detailed engineering, camp facility development and early earthworks, as the company continues to engage with local communities and the government.

Additionally, Newmont continued to strengthen its project portfolio while delivering its strategy of district consolidation with the acquisition of GT Gold Corp. and the Tatogga project in the highly prospective Golden Triangle district of British Columbia.