Our annual analysis of major gold discoveries has identified 329 deposits discovered over the 1990-2020 period, containing 2.58 billion ounces of gold in reserves, resources and past production. With the London Bullion Market Association gold price increasing from an average of $1,482 per ounce in December 2019 to an average of $1,860/oz in December 2020, it is unsurprising that the number of older, small discoveries has increased significantly due to gold price revisions. In our 2020 analysis of gold discoveries, there were 78 deposits containing between 2 million ounces and 3 Moz of gold, this year there are 90. Most of these deposits, however, are older discoveries, with only a few added in the most recent decade. 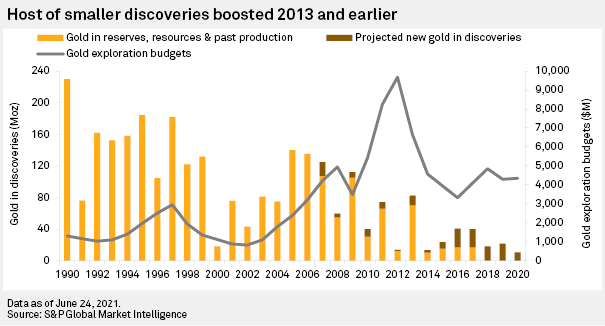 We have long been documenting the declining number of major new deposits being discovered annually. Despite the increase in the number of discoveries included this year, the trend for gold continues to worsen. Only 29 of the 329 deposits included in this analysis were discovered over the past decade, and contain only 208 Moz, or 8%, of all gold discovered since 1990. Although we believe the sharp decline indeed reflects the lack of new significant deposits being found and explored, a portion of the recent shortfall reflects a lack of the remaining exploration effort required to expand the known endowment of newly found deposits beyond our major discovery threshold.

As noted in other research we have published, companies have been revising their reserve and resource statements over the last few years to increase the gold price used in calculating economically minable gold. The result has been a surge in smaller discoveries that have surpassed our major discovery threshold despite being older, although in many cases additional exploration has also been conducted.

Global spread of discoveries relatively even

Although the Africa and Asia-Pacific regions host the majority of gold discovered in the past decade, the global spread is relatively even regionally, especially when compared with copper, which heavily favors Latin America. Asia-Pacific is traditionally a popular region for gold discoveries, particularly Australia, while Africa has been relatively more prolific than other regions over the past decade thanks to Western African nations.

Our research into the gold production pipeline has shown that future supply growth, if any, will be relatively minor over the next two years, with gold production expected to begin declining from 2024 onward. Although there are a number reasons for this, a contributing factor is a lack of quality assets available for development. While nearly half, or 156, of the discoveries included in our analysis are not yet in production, only 35 of these have over 10 Moz of gold in reserves and resources — enough for a mine to produce over 200,000 ounce per year of gold over a significant mine life. But many of these assets have a long road, feasibility studies and permitting, to get to production, making them unlikely to have a near- or mid-term impact on the pipeline.

More investment is needed from the industry into all levels of the pipeline — from grassroots exploration to locate more quality discoveries to approving funds for construction — to prevent severe supply reductions over the next five to 10 years.