Among the 82 global mobile operators surveyed by Kagan, some 29% have already deployed 5G-based FWA services or plan to do so later this year. Another 40% plan to deploy FWA in 2023. 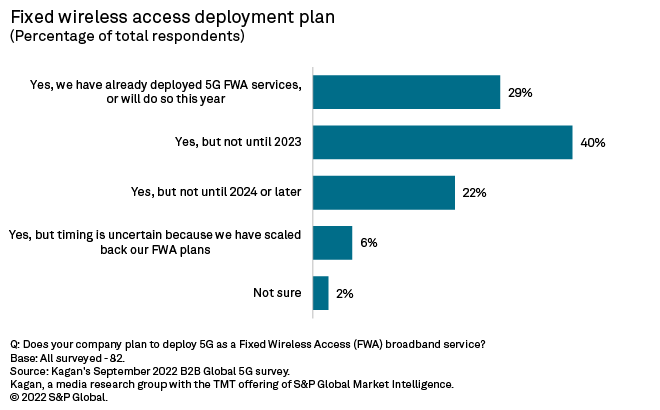 While FWA is benefiting underserved markets, the vast majority of respondents said their strategy in deploying 5G-based FWA is to expand their company's 5G footprint and supplement existing 5G services to enable additional revenue. Indeed, both Verizon and T-Mobile are demonstrating value in selling fixed wireless services at a reduced price when consumers also pay for their premium mobile plans. 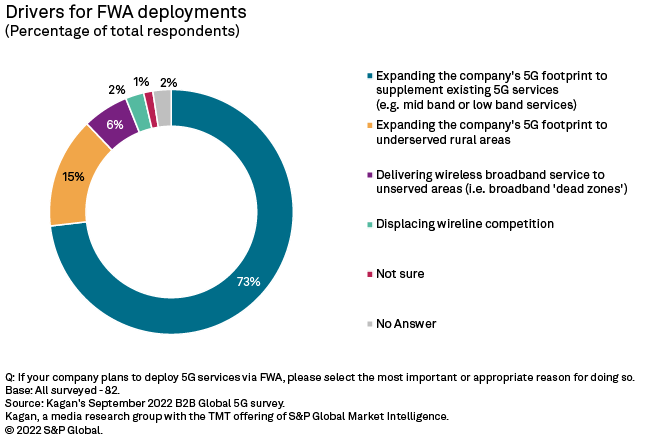 This is the third year in which survey results showed that the connected home ranked highest in terms of 5G adoption drivers at 82%, up slightly from 81% in 2021. A connected home might include smart speakers, 5G streaming sticks, and security and automation systems. Not surprisingly, 68% of respondents cited residential wireline replacement as another key driver of consumer 5G adoption. The idea that multiple 4K/8K video streaming is a key driver for 5G adoption slightly decreased from 68% in 2020 to 63% in 2022. This is likely because the performance of 5G has improved and deployments are occurring in markets that were previously lagging, such as Latin America and Africa, driving greater interest in services that can finally be enabled today. 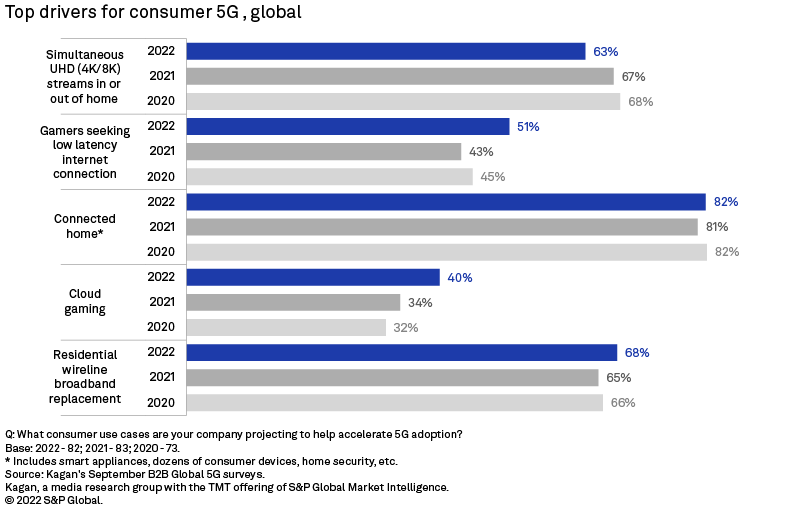 Respondents' view of 5G-powered gaming as a consumer driver grew significantly from 2020 to 2022. Cloud gaming grew 8 percentage points during the last two years, while low-latency gaming services increased 6 percentage points. Some 79% of respondents from Latin American operators indicated low-latency gaming is a top driver for consumer adoption compared to just 31% in 2021. Cloud gaming being cited as a driver grew consistently among North American operators, jumping from 50% in 2021 to 60% in 2022. In North America, operators are making investments in mobile edge computing and partnering with cloud service providers, such as Microsoft. 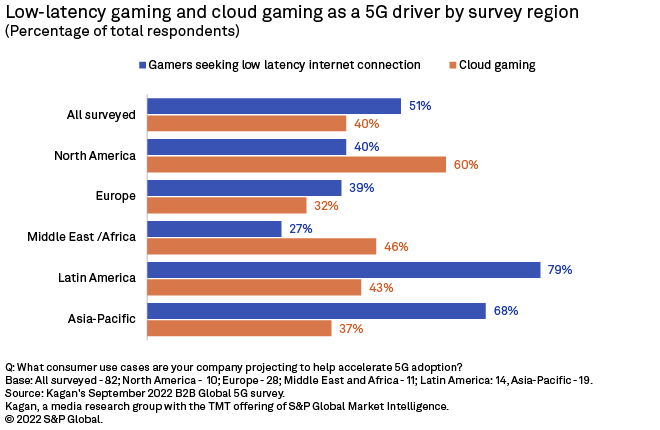 Similar to the connected home, the connected city, or "smart city," is expected to help lure the enterprise into 5G, according to the survey, with the largest percentage of total respondents choosing smart city applications as a top driver at 72%.

The strongest interest was among North American, Asia-Pacific and Europe survey takers. Smart city initiatives are already, for instance, using urban sensors to collect data to reduce traffic congestion or provide video monitoring. The adoption of such technology is being driven not only by 5G but also by smaller sensors that are able to collect the troves of information cities can use to analyze and create greater efficiencies.

The second-largest area of interest is factory automation, with 68% of respondents expecting this sector to be a 5G driver and the strongest response from North America at 80% and Europe coming in second at 75%. Industrial use cases, such as supply chain management and process manufacturing, are moving ahead in these regions. The ability to analyze the massive amount of data in real time is important for enterprise cost and efficiency.