State lawmakers have been busy advancing robust energy-related legislation during current legislative sessions. While the overall number of enacted measures has dropped in comparison to 2021, a significant amount of bills passed both chambers and ultimately received approval.

Bills relating to electric vehicles and infrastructure, solar energy and hydrogen gas topped the list of the most commonly enacted energy-related measures across 19 states. Additional enacted bills dealt with carbon emissions, other forms of renewable energy and net metering.

Legislatures in the District of Columbia and all but four states — Montana, Nevada, North Dakota and Texas — have convened in 2022.

During the second quarter, lawmakers continued to focus on various facets of the renewable and clean energy sector. While many states have already enacted ambitious renewable portfolio standards in past years, the current trend among lawmakers has been to pass measures that complement these policies and facilitate a path to achieve these overarching targets.

While only a handful of states are still in session, several special sessions are expected to convene in the coming months. Additionally, several of the remaining legislatures are concluding their final year of a two-year legislative session, indicating an expected significant increase in enacted measures in 2022. 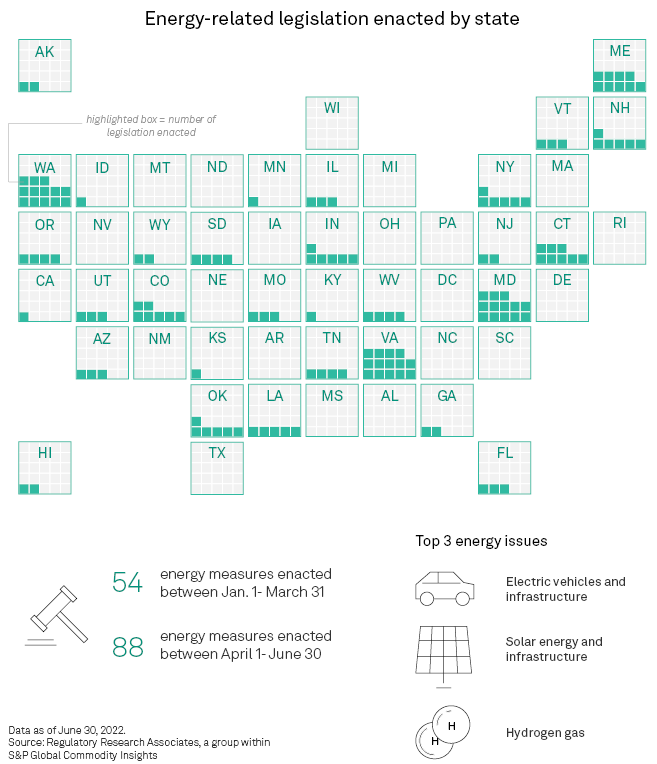 State lawmakers have continued to embrace measures regarding EVs and related infrastructure, which once again tops the list of themes consuming state-level politics. This comes as no surprise, as many governors alluded to the potential ramp-up in activity on EVs and EV infrastructure in the near term during their state of the state addresses.

The bill allows the Department of Energy and Environmental Protection commissioner to adopt California's emission standards for medium- and heavy-duty vehicles. This provision follows an executive order issued by Lamont in December 2021, which required the department to submit an assessment of whether the state needed to adopt the Advanced Clean Trucks Regulation to meet statutorily required emission reduction targets under the Global Warming Solutions Act.

Additionally, the bill states that starting Jan. 1, 2023, the Department of Administrative Services must require that each new construction of a state facility with total costs exceeding $100,000 be installed with level two EV charging stations in at least 20% of parking spaces designated for cars or light-duty trucks.

SB 4 also follows a trend of states enacting measures that set targets for zero-emission school buses. By Jan. 1, 2030, all school buses must be zero-emission in school districts entirely within, or that contain, an environmental justice community as of July 1, 2022. The remaining districts must reach that target by Jan. 1, 2040.

Maine Gov. Janet Mills, a Democrat, signed Legislative Document 1579 on May 2, requiring the Commissioner of Education to approve the purchase, lease or contracting of school buses to the extent practicable in a manner that would result in at least 75% of annual school bus acquisitions being ZEVs by 2035.

The measure also creates an interagency working group to develop a plan to achieve the increases for zero-emission school buses. The working group must, at a minimum, consist of representatives from the governor's Energy Office, the Department of Education, the Department of Transportation, the Department of Environmental Protection, the Maine Public Utilities Commission, the Efficiency Maine Trust and at least one member representing school administrative units. The group must submit its plan and report findings to the legislature's joint standing committee no later than Dec. 7, 2022.

LD 1579 also sets the Department of Public Safety and Central Fleet Management Division goals for annual purchases or leases of light-duty motor vehicles at 50% plug-in hybrid electric or zero-emission by 2025 and at 100% by 2030.

In Maryland, House Bill 696 was enacted without the governor's signature May 29. The measure establishes the Electric School Bus Pilot Program, which is to be implemented and administered by the Maryland Public Service Commission. An investor-owned electric company may apply to the PSC to implement a pilot program if the program is structured to begin by Oct. 1, 2024. The initial duration of the pilot program must be at least three years and up to five years.

A utility may recover costs related to the program through a mechanism that is reviewed and approved by the PSC and may establish a pilot tariff or rate to provide service to an electric school bus. Beginning in 2025, a utility that establishes a pilot program must annually report on the program in consultation with each participating school system.

Illinois Gov. J.B. Pritzker signed Senate Bill 3005, establishing the 15-member Electric Vehicle Permitting Task Force with the Environmental Protection Agency. The task force is responsible for, among other things, identifying existing and potential challenges faced by the EV industry with respect to the process of obtaining necessary permits from the EPA, the Department of Natural Resources and the Department of Transportation.

Renewable energy policies have been on the rise over the years, as states have set renewable portfolio standards or clean energy goals to reduce carbon emissions and to ensure that cleaner energy sources power the grid. Renewable energy policies vary by state; a state may require the use of renewable sources, carbon-free sources, neutral sources or a mix of all three.

Florida Gov. Ron DeSantis, a Republican, signed House Bill 1411 into law on April 27. The bill will promote the use of floating solar facilities by requiring each local government to allow these facilities as permitted use under certain conditions and amend its land development regulations. In addition, the Office of Energy within the Department of Agriculture and Consumer Services is tasked with submitting recommendations to the legislature to provide a regulatory framework to private and public sector entities that implement floating solar facilities.

An additional bill that was enacted without the governor's signature — companion bills House Bill 1039 and Senate Bill 860 — would provide several tax benefits for a community solar system placed in service after June 30 and approved on or before Dec. 31, 2025. The Maryland Energy Administration is required to study the effectiveness of the tax incentives, encouraging community solar systems to be installed on rooftops, brownfields, landfills, and clean fills and used for agrivoltaics. A report is due to the General Assembly by Dec. 31, 2024.

Another tax-related bill was passed in Missouri when Gov. Mike Parson, a Republican, signed Senate Bill 820 on June 29. The bill, among other things, authorizes a sales tax exemption for purchases by a company of solar photovoltaic energy systems, the components used to construct a solar photovoltaic energy system and all purchases of materials and supplies used directly to construct or make improvements to such systems, provided that the systems are sold or leased to an end user or are used to produce, collect and transmit electricity for resale or retail.

The bill also allows a homeowners' association to adopt reasonable rules regarding the placement of solar panels or solar collectors to the extent that the rules do not prevent the device installation or adversely affect its functioning, use, cost or efficiency.

A separate bill, Senate Bill 745, also enacted June 29, establishes the Task Force on Fair, Nondiscriminatory Local Taxation Concerning Solar Energy Systems, which is to compile a report for delivery to the General Assembly by Dec. 31.

In Connecticut's Senate Bill 4, a provision is included that prohibits planned community associations from adopting or enforcing rules that effectively prohibit unit owners from installing solar power generating systems on their own units' roofs. The act exempts condominiums and cooperatives from this provision.

In Maine, Gov. Mills signed Legislative Document 1656, which states that the Maine State Housing Authority must require that construction projects funded by the Authority use all-electric equipment and systems or other non-fossil fuel systems for heating, domestic hot water, cooking and cooling needs. Additionally, the projects must provide infrastructure for installing solar photovoltaic systems and energy storage where appropriate, including the provision of sufficient interior space to allow for solar photovoltaic inverters and energy storage.

Virginia Gov. Glenn Youngkin, a Republican, signed Senate Bill 660 on April 11, which directs the Virginia State Corporation Commission to convene a stakeholder work group to evaluate shared solar programs for American Electric Power. Additionally, the commission must report on its findings to the chairmen of the Senate Commerce and Labor Committee and the House Commerce and Energy committees by Nov. 30, 2022.

With the continued growing shift from fossil fuels, states have begun to look for alternatives to help reach carbon emission reduction targets. As states begin exploring the viability of hydrogen fuel, many of the recently enacted measures have begun the investigatory process to better understand the resource's potential.

In Arizona, Senate Bill 1396 was enacted April 22 and created a 12-member hydrogen study committee responsible for investigating and evaluating existing state and federal policies related to hydrogen production, distribution, use and storage. The committee will make recommendations with consultation from several government agencies, including the Arizona Corporation Commission and other stakeholders.

Connecticut enacted House Bill 5200, establishing a 21-member task force to study hydrogen-fueled energy in the state's economy and energy infrastructure. The task force is responsible for reviewing regulations and legislation needed to guide the development and achievement of economies of scale for the state's hydrogen ecosystem. Additionally, the group must examine how the state can take advantage of incentives and programs created by the federal Infrastructure Investment and Jobs Act, as well as examine the sources of potential clean hydrogen including, but not limited to, wind, solar, biogas and nuclear. A report is due to the legislature by Jan. 15, 2023.

On June 27, Hawaii Gov. David Ige, a Democrat, signed Senate Bill 2283, which requires the Hawaii Natural Energy Institute to conduct a study to examine the potential for the production and use of renewable hydrogen in the state and its potential role in achieving a reliable and decarbonized energy system. A report is due to the legislature before the 2024 regular legislative session.

Illinois lawmakers enacted Senate Bill 3613 on June 10, establishing a 24-member hydrogen economy task force responsible for identifying opportunities to integrate hydrogen in the transportation, energy, industrial, agricultural and other sectors. The task force is required to submit a report to the governor and the General Assembly by Dec. 1.

Oklahoma Gov. Kevin Stitt, a Republican, signed Senate Bill 1853 into law May 26. The bill requires the state to set a goal of producing 2 million metric tons of hydrogen fuel annually using a low- or zero-carbon energy source. Additionally, the measure requires every qualified hydrogen fuel production facility to annually report the amount of hydrogen fuel it produced the preceding year to the Oklahoma Corporation Commission by March 1.

Legislatures in the District of Columbia and all but four states — Montana, Nevada, North Dakota and Texas — convened in 2022. At this time, nine jurisdictions have legislatures still in session, while three states are in special session.

Following the 2021 general election, Republicans hold the governorship and majorities in both chambers of the legislature in 22 states, whereas Democrats have full control in 14 jurisdictions. The remaining 13 states operate under a divided government where neither party holds control. Nebraska has a nonpartisan, unicameral legislature, while the Council of the District of Columbia is just unicameral.

Looking to the Nov. 8 general elections, 36 governors, the mayor of the District of Columbia and 88 legislative chambers will be on the ballot. Out of the 36 governor races, four Republican and three Democrat incumbent governors are ineligible to seek a new term due to statutory term limits. Only one governor — Massachusetts Gov. Charlie Baker — declined to seek another term. 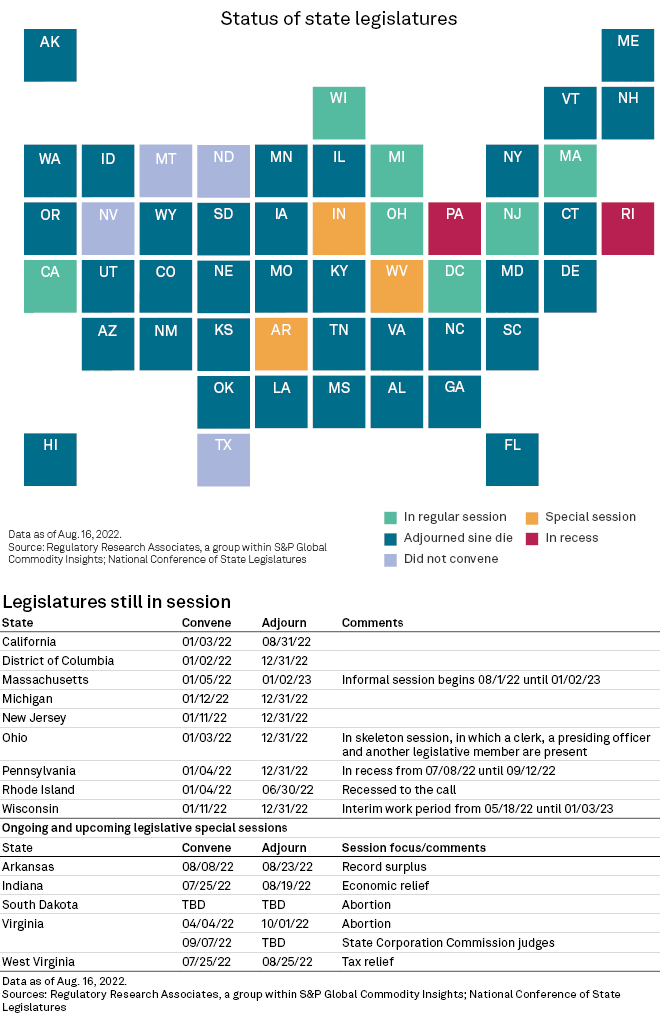 For more insight on various enacted and vetoed legislation, refer to the state-by-state legislative summary tables.