There have also been some positive signs from the latest Chinese macroeconomic data, indicating a recovery slowly underway.

While we expect that prices for the metals covered here will rebound in the second half of the year, we have significantly reduced our price forecasts since early March to reflect the considerably more severe impact of the COVID-19 pandemic than previously anticipated. We also now expect the rebound to be less robust, after S&P Global Ratings significantly reduced its 2020 global GDP growth forecast to just 0.4%. Furthermore, our price forecasts have been significantly reduced as S&P Global Ratings does not expect as significant a Chinese stimulus plan as that launched during the 2008-09 financial crisis. As a result, increased demand in the second half of 2020 will depend more on the pace with which national economies ease back toward normalcy.

This research article will examine how the COVID-19 pandemic is expected to impact the metals and mining industry, with particular emphasis on iron ore, copper, zinc, lead, nickel and key battery materials. It is also a follow-up to our article "Metals markets to rebound after coronavirus epidemic peaks" published March 3.

Since the beginning of March, the outbreak of COVID-19 has had some major global developments. On March 11, it was declared a pandemic by the World Health Organization. There are now over 1.3 million confirmed cases worldwide, over 70,000 deaths related to the disease and over 200 countries impacted as of the time of writing. There have been some positive signs, however, such as China reporting zero local infections March 19, while the city of Wuhan, the origin and initial epicenter of the virus, has officially lifted its quarantine.

There have also been some positive signs from the latest Chinese macroeconomic data, indicating a recovery slowly underway. The Caixin Purchasing Managers Index, or PMI, jumped to 50.1 in March — above the 50 level, which indicates expansionary territory — from an all-time low of 40.3 in February, while the official NBS manufacturing PMI in China was also above 50 at 52.0 in March, again up from an all-time low of 35.7 in February. While most of China's other key economic indicators for March are not expected until later in April, the stronger PMIs for March indicate there may be some recovery in the country's economy in the short term.

The positive signs for economic activity in China have been insufficient, however, to prevent S&P Global Ratings from decreasing its Chinese GDP growth forecast for the year to 2.9% on April 4, down from its previous forecast of 5.0% on Feb. 6. Outside China, S&P Global Ratings now forecasts significantly lower GDP growth for every region compared with 2019 levels. In the U.S., the longest-ever economic expansion is expected to end abruptly, with GDP falling 1.3% in 2020; the country is now the most affected by the coronavirus. Given that the U.S. is the eurozone's biggest export market, this is contributing to an expected 2.0% decrease in eurozone GDP, with global GDP now forecast to rise just 0.4% in 2020, down from 2.9% in 2019. 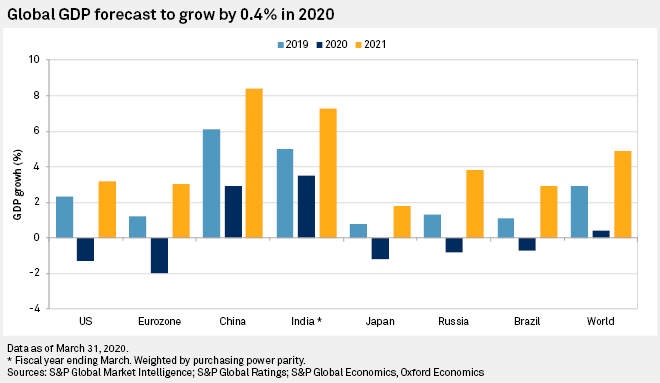 The global economic implications of the pandemic have had severe impacts on the metals and mining sector, with exploration budgets expected to fall by 29% this year, and a substantial and increasing number of operations being impacted. The most significant implications have resulted from national and provincial closures such as those in South Africa, Peru, Canada and Mexico.

The base metals have all had substantial decreases in prices since the beginning of the year as the pandemic's economic impact has reduced consumption across the metals and mining industry and caused a substantial amount of uncertainty. The base metals have all followed copper, as is traditionally the case in times of uncertainty, whose price has decreased by 22% since Jan. 2, while iron ore, zinc, lead and nickel have all fallen by 10%-20% over the period. Cobalt and lithium carbonate prices have fallen by just 5% and 8%, respectively, over the same period.

Copper, which is often considered the bellwether of the metals due to its market size and multiple end uses, has been the most impacted by the pandemic, with its price dropping by 22% since Jan. 3. In our March Copper Briefing Service, we reduced our global refined copper consumption forecast by 1.1 million tonnes to 23.6 Mt as the global economic outlook significantly deteriorated in late February and early March. Most of the decline was a 755,000-tonne decrease to our demand outlook for China, the largest global consumer of refined copper, which was unable to get sufficient labor to manufacturing plants. As a result, we dropped our forecast copper price for the year to US$5,850/t from our previous forecast of US$6,107/t. 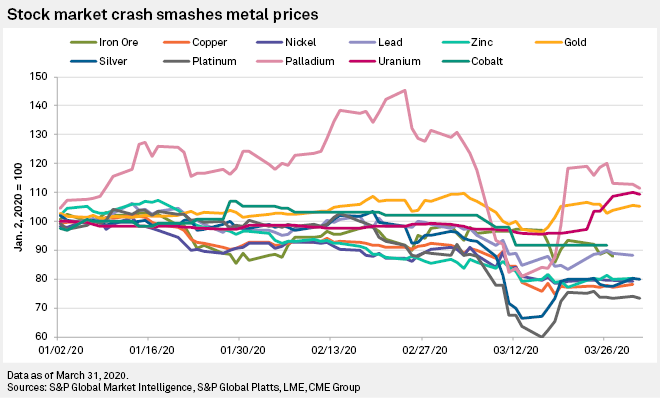 Despite easing back of late, iron ore's comparative price resilience during the global pandemic has outperformed base metals benchmarks. Iron ore prices have been supported by a combination of robust Chinese steel (rebar) prices and weather-related supply disruptions in the first quarter. Over recent weeks, the demand picture for iron ore has turned increasingly bearish as Europe and North America emerge as the pandemic hotspots and steelmakers respond by curtailing production. The contagion in China, however, now appears to be in remission, with economic activity normalizing. While this will boost Chinese demand for iron ore, it is unlikely to be sufficient to fully offset weakness globally. Hence we have reduced our iron ore price forecast for 2020 to US$79.70/dmt from US$82.80/dmt. 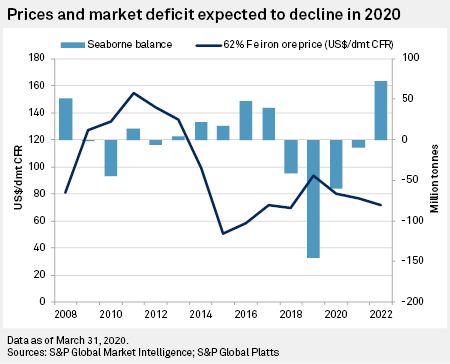 We now forecast that 2020 zinc consumption will fall by 2.0% to 13.5 Mt from 13.7 Mt in 2019. We expect this to result in prices falling to average US$2,065/t in 2020, which is significantly higher than the March 31 price of US$1,894.75/t. This is because we expect prices to rebound in the second half of the year as the global macroeconomic environment recovers from the impact of COVID-19 and because of significantly reduced mine output. We expect global mine production to fall by 2.8% to 13.4 Mt as several zinc assets have reduced output and there have been national and regional closures in key zinc-producing countries such as Peru, Canada and Mexico. Reduced mine output is now also more likely as benchmark zinc treatment charges are reported to have been settled at a 12-year high of US$299.75/t. 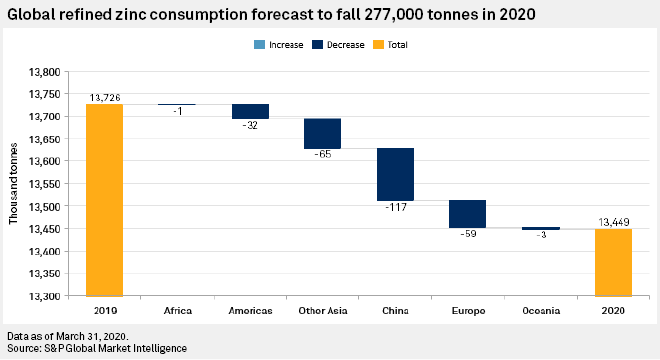 Lead down but not as much

The lead price is traditionally less volatile than other base metals prices, so it is no surprise that it fell less than other base metals prices, by only 10% over the first quarter of 2020 due to the COVID-19 pandemic. The price is generally more stable because most lead production goes into lead-acid batteries for engines, which need to be replaced approximately every three years. Despite the pandemic, car and truck batteries still need to be replaced, so the hard base of battery replacement is shoring up lead demand.

Given that China is both the largest producer and consumer of lead, when the city of Wuhan and then the rest of the country went into lockdown, the metal had a short, sharp price decline, from US$2,027/t on Jan. 16 to US$1,810/t on Feb. 10, a fall of 12%. As China has been emerging from its lockdown since the start of April, we forecast that the supply chain and market for lead will not get any worse. 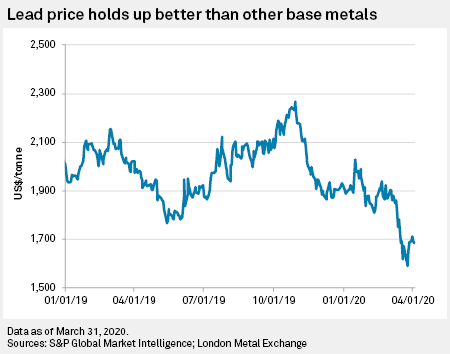 We expect global primary nickel output to fall by 6.4% to 2.22 Mt in 2020 as the number of countries on lockdown increases.

The Philippines' top nickel ore producers, Nickel Asia and Global Ferronickel Holdings Inc., decided April 8 to suspend their mining operations. The move came just two days after they announced they were resuming operations because an earlier local suspension order had been lifted. In the absence of nickel ore from Indonesia, China was expected to rely on the Philippines as the main source of feedstock for its nickel pig iron industry. This news could put negative pressure on Chinese nickel pig iron output later in the year as Chinese nickel ore port stocks and stocks held by producers become depleted.

We forecast global primary nickel demand to decline by a more severe 8.1% year over year to 2.21 Mt in 2020. The global primary nickel market will consequently move from an estimated deficit of roughly 30,000 tonnes in 2019 to a small surplus of 11,000 tonnes in 2020, compared with our December expectations for the market to move to a wider deficit of 95,000 tonnes this year. We expect the average London Metal Exchange three-month nickel price to fall by 13.8% year over year to US$12,036/t in 2020, with additional risks skewed to the downside. 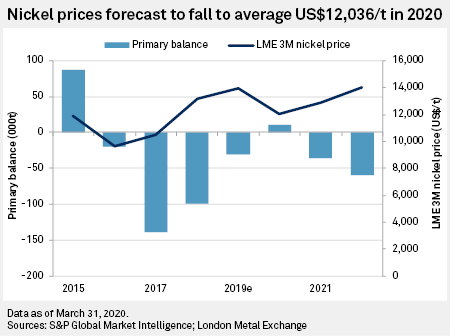 China recently announced a two-year extension of its New Energy Vehicle, or NEV, subsidies and purchase tax exceptions until the end of 2022. The announcement has not lifted prices as demand remains subdued. These extensions will support NEV sales as China's economy resumes, however, and will give more time to battery-makers to further lower their costs.

China's NEV sales could see a 16% year-over-year decline, reaching 1.0 million units in 2020. This assumes an average penetration rate of 4.3% seen since the subsidies were last reduced in July 2019 and a 9% decline in China's overall vehicle sales in 2020.

Lithium and cobalt prices in China declined in March due to cascading global demand destruction as COVID-19 spread. 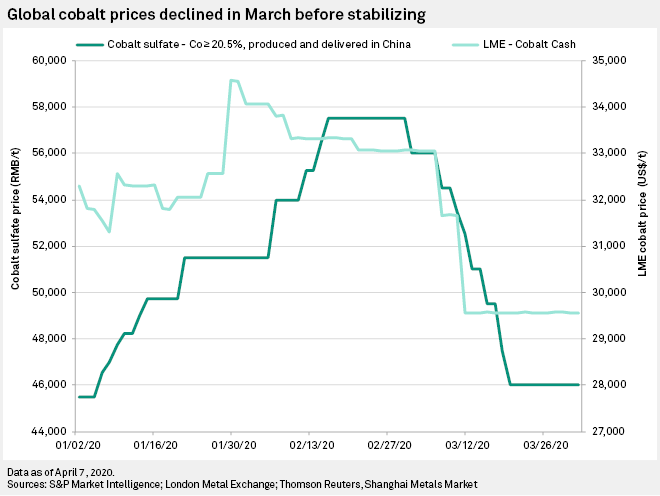 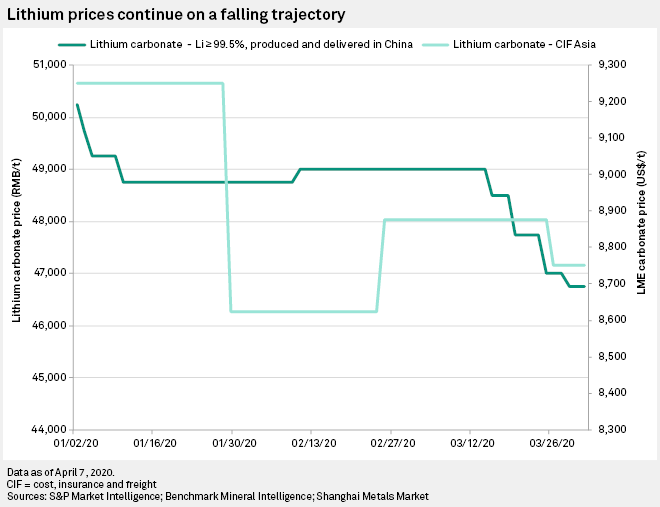 Global coronavirus containment efforts are also impacting lithium and cobalt raw material supply. Argentina accounted for 6.4% of global lithium raw material supply in 2019, and the two operating lithium brines are losing around 10-14 days of operation each due to mandatory quarantine measures. Orocobre Ltd. and Livent Corp. have now received approvals to resume operations, but both have withdrawn their previous 2020 production guidance.

Lithium projects with 115,000 tonnes of lithium carbonate previously expected to begin production in Argentina between 2020 and 2022 now face site-work delays or capital withdrawals as a result of the pandemic. 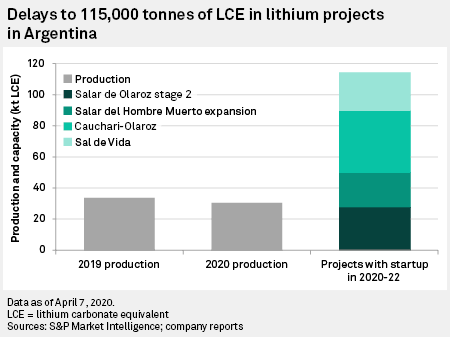 Understand the impact of COVID-19 on the Metals & Mining sector