Cloud hyperscalers round out Q3 with new regions, services and SKU changes


Cloud hyperscalers round out Q3 with new regions, services and SKU changes

Our benchmark cloud prices remained relatively stable in the third quarter of 2022, with a slight dip in broad pricing trends helping to allay worries about price hikes going into the end of the year. Beneath the surface, the quarter was active, with the Cloud Price Index logging nearly 345,000 stock-keeping unit changes (SKUs added, SKUs removed, price increases and price decreases) at Amazon Web Services Inc., Microsoft Corp. (Azure) and Google LLC's Google Cloud. Categorical price increases were seen in the app integration and storage categories, while some of the most notable price cuts took place in the compute category. New services and regions were introduced by all three hyperscalers as they work to expand their global reach and service portfolio.

Volatile macroeconomic conditions have kept cloud customers aware of minute changes to their cloud pricing and billing. Even with all the attention, the third quarter saw average cloud prices continue to plateau rather than rise, bucking the inflationary trend persisting throughout the economy. Cloud providers have managed to keep pricing relatively steady, choosing to focus on the rollout of new regions and services and taking advantage of their distributed networks to keep average prices on current products stable. It should be noted that categorical and regional price increases have been announced, with Google's March announcement of upcoming price increases leading cloud users to wonder if broader increases will be coming. The first round of Google Cloud's announced price increases went into effect in October, with the second round of increases scheduled for April 2023. Although average cloud pricing has, up to this point, remained steady, price increases in individual cloud service categories may lead to higher total cloud costs for some customers. Additionally, the continued shift of workflows to the cloud, the rollout and adoption of newer (and pricier) cloud services, and un-optimized cloud usage may still leave cloud users struggling with unanticipated cloud spending as budgets continue to tighten.

451 Research's Cloud Price Index periodically polls the billing APIs of the big three hyperscalers to discover where (in terms of both category and geography) AWS, Azure and Google Cloud Platform are adding SKUs and adjusting prices. The figure below shows the aggregate of such changes made in the third quarter, during which more than 320,000 net SKUs were added to these providers' catalogs and more than 20,000 SKUs were removed. We also tracked roughly 1,600 individual SKU price changes (increases and decreases) over the course of the quarter. 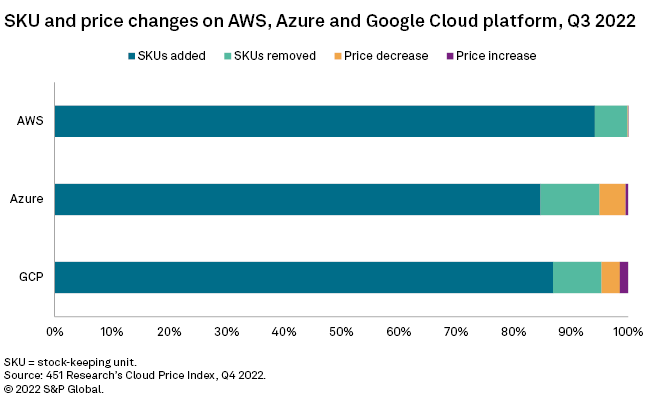 The data in the figure above are presented on a 100% scale due to AWS' API granularity (a result of Jeff Bezos's "API mandate" introduced in 2002). For reference, AWS initiated nearly 319,000 of this quarter's SKU and price changes, making up 92.7% of all the changes we tracked across the three hyperscalers.

The third quarter saw the usual surge in SKU additions from all three hyperscalers, but AWS also experienced a notably higher percentage of SKU removals this quarter compared with the second quarter (5.7% versus last quarter's 1.1%). Google Cloud and Azure also experienced slightly higher incidents of price increases this quarter compared with the last, with the bulk of Azure's price increases in the categories of application integration and storage, and the majority of Google Cloud's price increases in the categories of compute, storage and analytics. On Oct. 1, Google also implemented the first round of its anticipated price increases, which were initially announced in March. Round one focuses on increased pricing for new products/SKUs in areas including storage, persistent disk (PD), load balancer and cloud ops monitoring. In April 2023, Google Cloud is planning to implement the remainder of its announced price increases for existing products.

In the case of each hyperscaler, price decreases outnumbered price increases. In August, Azure also announced a broad price reduction across its U.S. West 3 Region, and in September, AWS announced a price decrease for its AWS Config conformance pack prices.
The hyperscalers also implemented new pricing models for certain products, including the new pay-as-you-go pricing structure for Google Cloud Apigee, which does not require an upfront commitment and is offered as an additional option to Apigee's existing subscription plans.

The cloud hyperscalers were busy this past quarter, adding several services in both private preview and general availability. In the third quarter of 2022, several categories saw new service announcements:

In the world of VMs, the quarter also saw new additions and availabilities. In July, Azure announced the general availability of its NVads A10 v5 series virtual machines, made for use with graphic, video and AI workloads. August saw the public preview of Azure's AMD-based confidential VMs for Azure Kubernetes Service (AKS), and in September, Azure also announced the general availability of VMs with Ampere Altra Arm-based processors.

With all the major hyperscalers pushing toward global expansion, the past quarter saw an increase in the number of regions added around the world. In Europe, the Middle East and Africa, Azure added a Qatar region (QA Central), which also includes Azure Availability Zones, meaning the region is designed with unique physical datacenter locations with independent power, network and cooling. AWS also added a new region in the United Arab Emirates: Middle East (UAE).

Some of the new regions that have been announced by the hyperscalers thus far include: