The Asia-Pacific region is turning cashless at breakneck speed, according to a review of nine large APAC economies by S&P Global Market Intelligence. The rise of non-card payments, however, presents only modest revenue opportunities for banks and nonbanking intermediaries.

Thailand and India are among the fastest-growing payments markets, registering compound annual growth rates of 106% and 83%, respectively, from 2016 to 2019, albeit on a small base. Barring Japan, all countries registered double-digit CAGRs in cashless payments from 2016 to 2019. Japan's 3-year CAGR was 9%.

Still, no country is even within the shouting distance of China, whose digital payments processed by nonbanks exceeded $36 trillion in 2019. China, which saw close to $17 trillion in aggregate debit and credit card payments, is also the largest card market in the world.

None of the remaining countries' retail payments — comprising cards, stored-value electronic money and interbank transfers — exceeded $1 trillion. But while China dominates in aggregate terms, much of its economy is now already cashless and therefore the growth rate in China's payments market is tapering off. 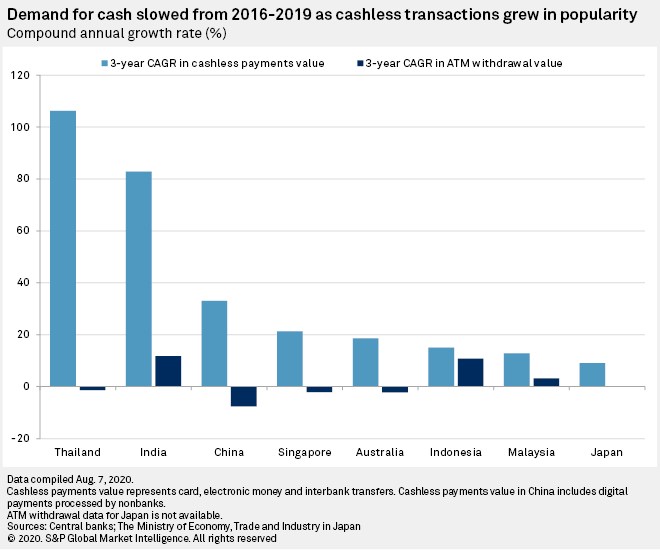 All countries have at least two of the aforementioned payment frameworks, but non-cards are becoming primary payment methods in most of them. In alternative payment markets, revenues are small relative to transaction values.

Across the region, fintech arms of large digital conglomerates are increasingly taking market share. Tech giants use the e-money framework available for nonbanks to facilitate payments without subjecting themselves to bank-like regulatory scrutiny. But banks are putting up a fight, promoting modernized interbank networks to preempt the risk of disintermediation by nonbanks in digital payments. 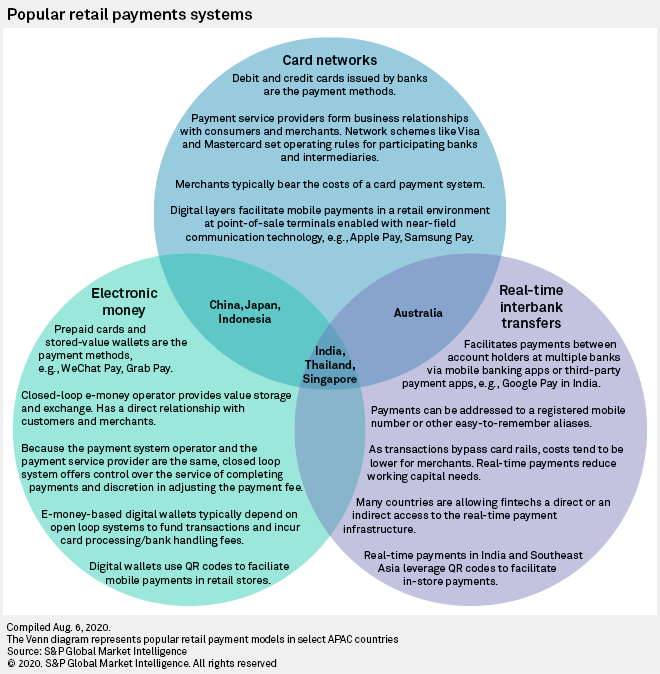 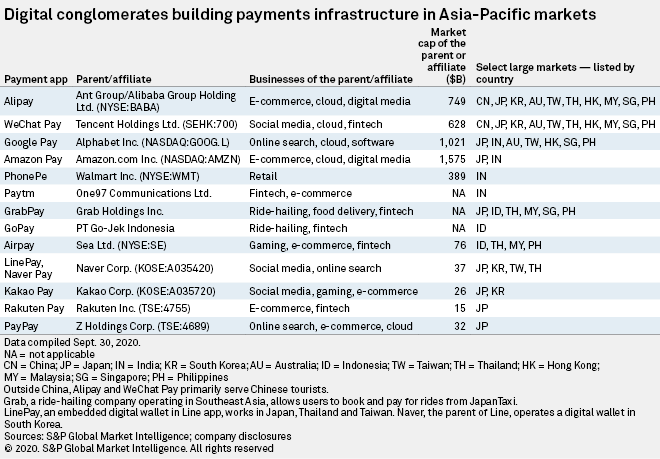 The greatest proponent of the electronic money model is China, where customers use the prepaid value on a mobile phone to make online payments, transfer money to individuals and make in-store purchases using Quick-Response codes.

China's third-party payments market, a proxy for e-money payments processed by nonbanks, grew to $36.165 trillion in 2019 from $600.22 billion in 2012. Amid the rise of digital payments facilitated by nonbanks, demand for cash is reducing in China. Between 2014 and 2018, cash in circulation as a percentage of GDP fell from 10.4% to 8.9%, as cash withdrawals from ATMs declined every year. 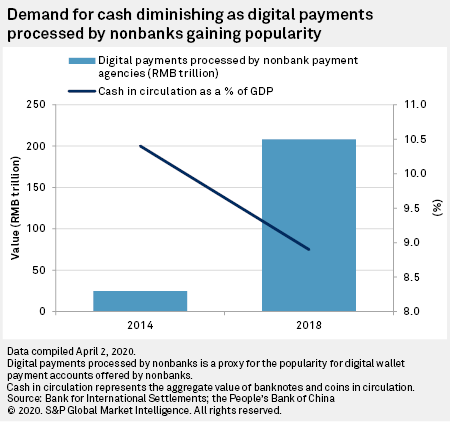 China may have leapfrogged to mobile payments from cash, but the success of digital wallets in the country partly owes to the rising levels of bank account and card ownership. Between 2013 and 2019, Chinese banks issued 3.87 billion debit cards and 355 million credit cards.

Mobile payment users typically draw funds into their e-wallets by linking their bank cards to wallets. Payment fintechs also access low-cost banking infrastructure, such as automated clearing house rails, to facilitate transfers from the bank accounts of individuals to stored-value wallets. In both instances, banks perform a limited function of facilitating top-ups, becoming silent funding pipes for the digital wallets.

In countries with large unbanked populations like Indonesia and the Philippines, e-wallet issuers create networks of physical cash-in facilities to allow people to make deposits into their stored-value accounts. While inadequate banking infrastructure creates opportunities for nonbanks to play a bigger role in the delivery of financial services, it has overall proven to be a drag on cashless growth rates.

Indonesia's cashless growth rates are trailing Singapore and Thailand, although the scope for replacing cash is greater in the archipelago. Growth rates in credit card transactions were low as Indonesian banks appeared to be reluctant to issue credit cards. Already the largest e-money market in Southeast Asia, Indonesia's cashless payments will increasingly tilt in favor of stored-value wallets. 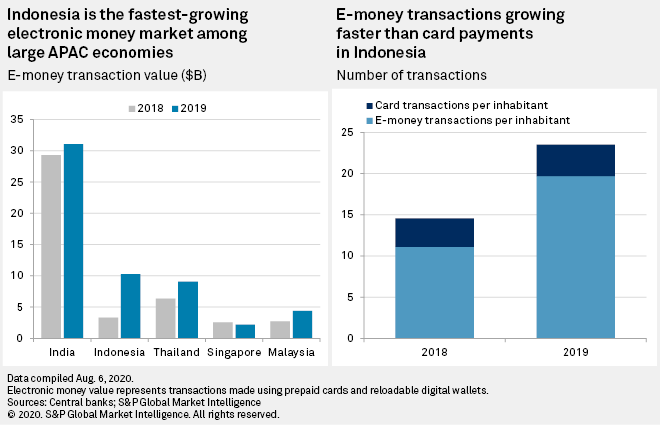 Southeast Asian economies are becoming integrated, with ride-hailing, e-commerce, gaming and financial technology companies establishing a presence. The e-money framework has allowed them to facilitate digital payments to their customers.

Interbank pipes funnel money from customers' bank accounts directly to those of recipients. The implementation of overlay services that allow users to address payments to a registered mobile number has become a catalyst for the uptake in mobile payments. Building in mechanisms to support "request to pay" messages has allowed some of the schemes to support merchant ecosystems. As transactions bypass card networks and use a banking infrastructure, payment costs for bank-to-bank transfers tend to be lower and encourage greater merchant adoption.

Thailand's scheme has so far seen the greatest uptake with consumers among the countries that launched interbank systems for retail payments in the Asia-Pacific region. Launched in January 2017, Thailand's PromptPay processed 37 transactions per capita in 2019, helping banks recapture the market for small-value payments.

While in Thailand people access real-time payments using mobile apps of banks, Indians widely use payment apps offered by tech giants to make interbank transfers. India processed interbank transfers worth $571 billion in 2019, becoming the largest market for real-time interbank transactions in the group. What makes India unique is that it brought nonbanks into the fold in a more inclusive way and made them primary drivers of mobile payments. Internet giant Google handled nearly 4 billion transactions between bank accounts in 2019. Amazon.com Inc. and Facebook Inc. are the other key players in India's real-time payments market.

In both Thailand and India, real-time interbank transactions attract little to no fees. Interbank networks in both countries are operated at the behest of their governments, which appear keen on providing low-cost digital payments to merchants. With no payment revenues to count upon, banks and nonbanks intermediating payments end up absorbing the costs of processing transactions.

In South Korea and Australia, cards remain dominant payment methods. With card payments saturating in the two countries, however, growth rates are largely muted. Only in China and India did cards register high double-digit compound annual growth rates from 2016 to 2019. 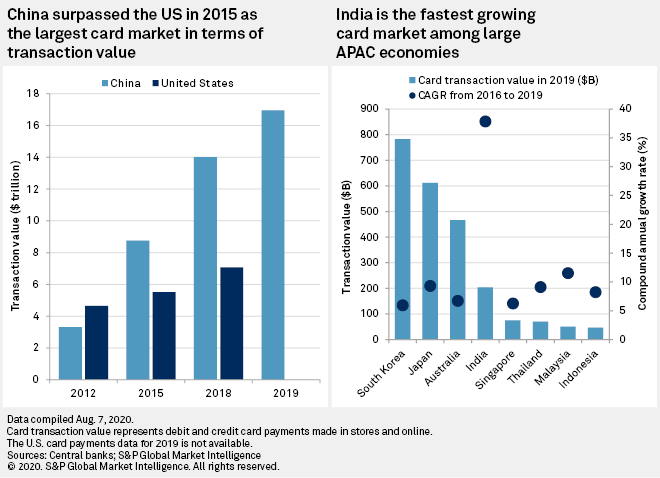 People in China use their bank cards far less frequently than in card-dominant markets. For instance, card transactions per inhabitant in China was 114 in 2019, compared to 413 in Australia. Chinese consumers, however, made 518 digital transactions on a per capita basis using wallets like Alipay.

Although cards remain less popular compared to stored-value wallets as payment methods in China, the need to upload funds to wallets using linked cards may have inflated the value of card payments. Banks, however, remain focused on growing card payments through banking association Union Pay and partnerships with popular consumer platforms.

But the expanding card activity may not be significantly contributing to Chinese banks' financials. Non-interest income from card payments represents a tiny fraction of the burgeoning card market due to regulatory caps on interchange fees. Card-issuing banks cannot collect more than 35 basis points on debit card transactions and 45 basis points on credit card transactions.

In Japan, alternative cashless payment methods have had far less success in weaning consumers away from cash and people do not use their credit cards as frequently as their neighbors in South Korea. Credit cards will remain Japan's best bet to turn cashless, as card issuers strengthen their customer relationships via digital channels. For instance, Rakuten Inc., a digital conglomerate in Japan that held a 15% market share in the credit card market in 2019, offers an e-wallet aimed at promoting its credit card usage among consumers.

For most of the tech giants operating in the region, revenues from payments may not be significant.

In traditional card markets, transaction charges paid by merchants more than cover the costs of issuing banks and other intermediaries operating in the payments value chain. The broad acceptance of a merchant discount rate model among merchants in the U.S. has allowed payment fintechs like PayPal Holdings Inc. to set favorable pricing terms for online payments.

With no legacy card infrastructure and an entrenched preference for cash payments, most Asian markets do not allow payment fintechs to command PayPal-like pricing power. Merchant aversion toward high payment costs resulted in low transaction take rates — revenues as a percentage of transaction values — for payment companies.

For the fourth quarter of 2019, revenues for Tencent in China and PhonePe Private Ltd. in India represented just 8 basis points of the transaction value handled by their platforms, according to our estimates. PayPal, on the other hand, commanded a take rate of 2.49%. 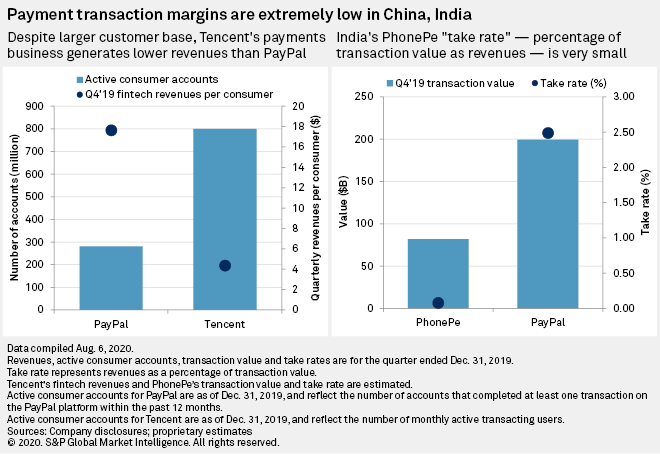 For both Tencent and Ant, digital payment revenues do not add much to their bottom line. Still, the two Chinese companies generate huge profits for two broad reasons.

Regulatory caps on interchange fees on bank cards in China have helped ease some pressure on Tencent and Alipay. Low bank handling charges reduce the cost base for payment fintechs, which incur processing costs when users draw funds into their closed-loop systems using linked-bank cards.

In India, fintechs acquiring consumers and merchants have little control over pricing as they operate in an open-loop system where the prices and operating rules are set by a banking consortium that works at the behest of the government.

In the absence of strong revenues from adjacent services, losses for Indian fintech startups like PhonePe are swelling every year. PhonePe and Paytm, another startup incubated in India, collectively consume $78 million a month in running their operations based on the estimated cash burn rate for the fiscal year ended March 31, 2019.

Payment fintechs will struggle to build a sustainable business model unless they expand into higher-margin adjacent financial services like lending. Countries with low penetration of credit cards offer opportunities for tech companies to provide a virtual revolving line of credit.

For many of the aforementioned big tech firms, payments are just means to propel their existing e-commerce and advertising businesses. They have deep pockets and can subsidize losses related to payments businesses.