For some markets that have already launched 5G, operation expense is becoming a major concern for tower rollout plans. This could put downward pressure on 5G tower growth, especially small cells.

Supply chain disruptions, cost concerns and infrastructure sharing slowed Asia-Pacific tower and small cell growth in 2020, lowering our projections to a 3.74% CAGR through 2031, while network demand surged due to the pandemic.

2020 was supposed to be a year of increased spending on networks, both for operators that have already launched 5G and for those that are still trying to expand their 4G coverage. Restrictions in the early days of the pandemic, however, disrupted both the movement of people and the flow of goods and services, which hampered tower rollouts.

Due to these difficulties, several operators and tower companies deferred some of their budgeted 2020 capital expenditures to 2021. This is reflected in our survey last year where 68% of Asia-Pacific operator executives said the pandemic has slowed down their 5G investment.

In contrast, the demand for connectivity surged due to the pandemic as people were confined to their homes. The mismatch between network supply through towers and demand resulted in increased congestion and, in some cases, outages like what happened in New Zealand in March 2020.

As increasing the supply of towers was not possible, regulators and operators focused on measures to smooth demand, such as restricting video streaming during peak hours or even encouraging consumers to use substitutes such as fixed services.

These headwinds eroded some of the growth drivers in our tower projections last year, so we dampened our expectations for this update. We project a 3.74% CAGR for total towers in the region from 2021 to 2031. While we project small cells to grow at 5.86% CAGR from 2021 to 2031, that pace will not be enough to close the gap with traditional towers, which we expect to grow at 2.31% CAGR. 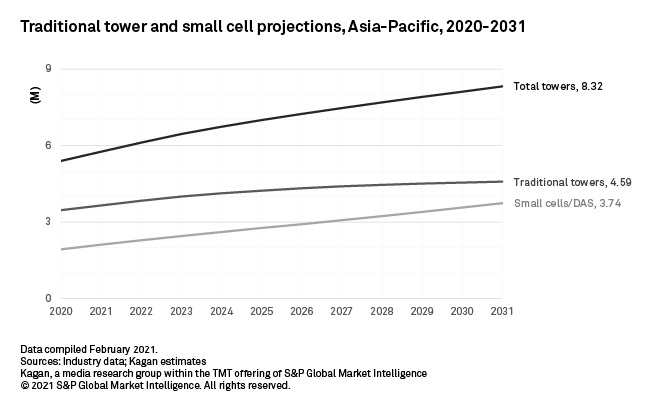 We estimate about 5.4 million towers and small cells in Asia-Pacific as of year-end 2020, slightly up from 5.3 million in 2019. Roughly 3.5 million of these are traditional macro-cell towers, while the remaining 1.9 million are a mix of small cells and indoor or rooftop distributed antenna systems.

Mainland China, South Korea and Japan still control a majority of the towers and small cells in the region. India is also a big contributor but mainly in the traditional-tower space since its small cell market is still relatively small. 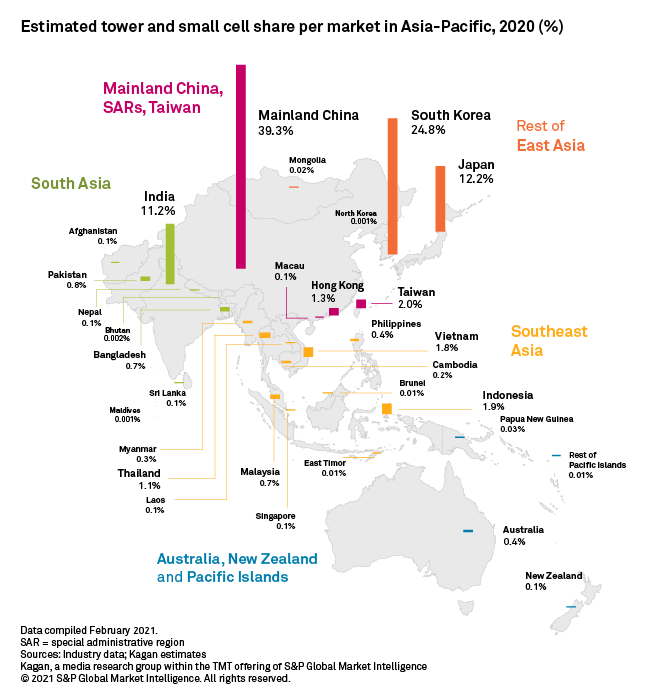 For some markets that have already launched 5G, operation expense is becoming a major concern for tower rollout plans.

According to equipment vendor Huawei Technologies Co. Ltd., the massive volume handled by 5G networks mean that their total power consumption will exceed that of 4G networks. 5G's reliance on multiple spectrums, especially millimeter wave, would also translate to higher electricity costs, according to Huawei.

This could put downward pressure on 5G tower growth, especially small cells, until a more cost-effective solution is developed. Huawei estimates it would cost $2,800 to increase the power supply capacity of about 750,000 towers in China for 5G, for a total of $2.1 billion. This was significant enough that China Unicom opted to shut down some of its 5G stations at night to save costs in August 2020.

We dampened our tower growth forecast for mainland China, Hong Kong, Macau and Taiwan to 4.38% CAGR from 2021 to 2031. Small cell growth also slowed down to 15.61% CAGR in the same period, which is still the fastest in East Asia.

South Korea is also facing tower operation cost issues. Data from the local regulator revealed that South Korea saw a 4% drop in its total towers in 2020, mostly due to the decommissioning of old 2G infrastructure.

The agreement of SK Telecom Co. Ltd., KT Corp. and LG U+ to share towers for 5G deployment in rural areas for cost savings may put further downward pressure on traditional tower growth in South Korea. Small cells, however, may continue to grow as the three operators committed to improving 5G coverage in major urban centers as part of their $22 billion targeted 5G capital expenditures through 2022.

India's nationwide lockdown on March 2020 halted the movement of people within and across states, which put a halt on the building of new towers and cell sites. Operators and tower companies shifted their focus on operating expenses, such as maintenance work.

The Philippines faced a similar situation. Dito Telecommunity, a new market entrant that started commercial operations in March 2021, was severely impacted as the imposed lockdown meant that it had to pause its tower building. Dito also had problems with the equipment it imports from its part-owner China Telecom Corp. Ltd. due to China's earlier lockdown in January 2020. Dito reportedly only finished building 300 towers as of July 2020 — far short of its target of 1,600 towers — but accelerated its rollout by the end of the year.

Operators and tower companies, however, remain bullish on tower growth for these two markets. American Tower Corp. remains optimistic on its tower business in India, citing the consolidation of the tower industry and strong government support for digitalization as significant growth drivers. There is significant room for growth in rural areas where 4G penetration remains lower than the national average.

The Philippine government remains committed to its earlier target of building 50,000 additional towers with no specified timeline to improve connectivity. The government awarded at least 23 tower company licenses and expedited approval of tower building permits to support this goal. Incumbent operators Globe Telecom and PLDT Inc. vowed to ramp up infrastructure spending in 2021 to prepare for the entry of new competitor Dito.

Pakistan and Vietnam are also seeing aggressive tower rollouts, whereas spectrum issues could curb growth in Indonesia, Malaysia and Thailand. These developments could push total towers in Southeast Asia and South Asia to grow by 6.72% and 4.76% CAGR, respectively, from 2021 to 2031.

If anything, tower activity in these markets in 2021 may focus on mergers and acquisitions. Singtel Optus Pty. Ltd. announced in April 2020 that it was planning to sell its towers in Australia but postponed the move to this year. Telstra Corp. Ltd. underwent a restructuring in November 2020 when it spun off its towers to a separate subsidiary dubbed InfraCo Towers. Dense Air Ltd. could become a significant small cell player in both markets if local operators buy into its wholesale small cell network business model.

We project a 5.34% CAGR for total towers in these markets in the next 10 years. 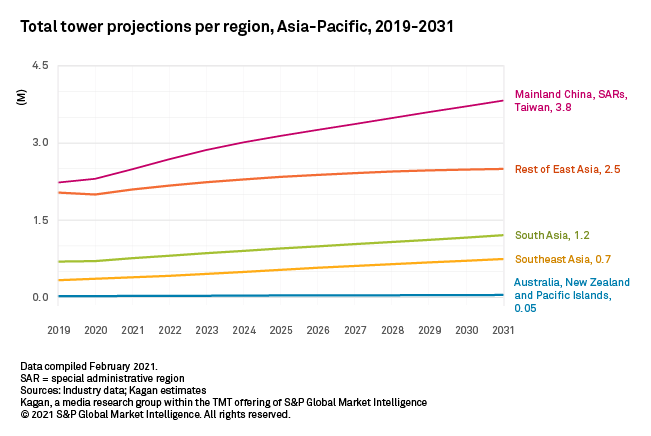