A year ago there was a great deal of uncertainty about what the new year offered. In the event, 2017 was a solid year for the industry, with greater demand for most metals, higher prices, and better financial management by mining company executives. As a result, investor confidence returned and there was a significant improvement in the market valuations of mining companies.

The recovery of commodity prices sparked a fresh breath of optimism in the mining industry. The market capitalization of the top 25 mining firms grew US$195.86 billion in 2017 to reach US$753.59 billion by year-end, a 35% increase from end-2016. The top five companies in this analysis represent more than 50% of the overall market capitalizations of the top 25 companies.

In 2017, a majority of the top 25 companies at least doubled in value, and in the fourth quarter, 20 companies saw their value rise compared with the end of the third quarter. 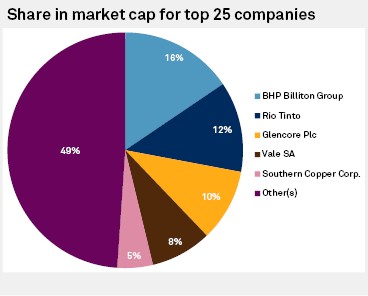 BHP Billiton Group maintained its supremacy throughout the year and once again ended the year in top place. The gulf grew between the market valuation of BHP and Rio Tinto, who came in second place. At year-end, BHP was the only company with the triple-digit market valuation: US$117.0 billion. The market capitalization of the top 25 mining firms grew US$195.86 billion in 2017 to reach US$753.59 billion by year-end,. Glencore Plc and Vale SA retained their third and fourth positions, with market valuations of US$74.5 and US$62.9 billion, respectively, at year-end. Coal India Ltd., which had ranked fifth in 2016, slipped four positions and ended 2017 in ninth place with a market cap of US$25.5 billion. Coal India's share price had been turbulent throughout 2017, and its profit attributable to shareholders fell to 3.69 billion rupees in the second quarter of its fiscal 2018, from the year-ago profit of 6.13 billion rupees.

The largest increase as a percentage of 2016 market capitalization was for China Molybdenum Co. Ltd. The Hong Kong-listed molybdenum producer saw its market valuation increase almost 169% to US$21.2 billion in 2017. As a result, the company recorded the largest jump in its ranking, rising to 10th from 36th at the end of 2016. China Molybdenum Co. said at the end of October that its third-quarter net profit attributable to owners of the parent ballooned almost eleven-fold to 769.4 million Chinese yuan. 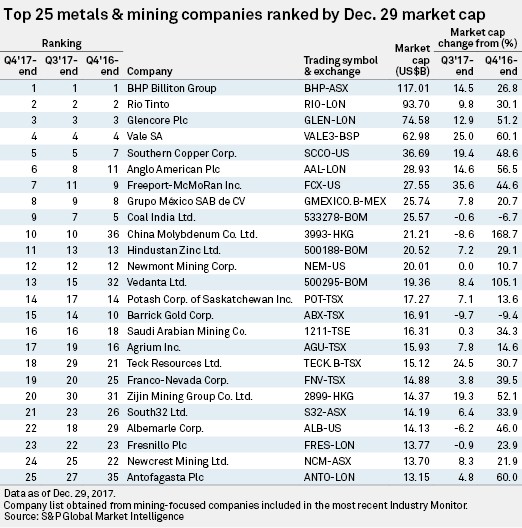 While most of the top 25 companies saw their market caps improve in both the fourth quarter and the year as a whole, Barrick Gold Corp.'s market cap declined quarter-on-quarter as well as year-on-year by 9%. As a result, the company recorded the steepest drop in annual ranking, slipping five places to 15th place. The company reported a net loss of US$11 million for the third quarter and attributed the loss to the reduced production, lower gold prices, and the impact of Tanzania's concentrate export ban on Acacia Mining plc's operations. North Carolina-based Albemarle Corp. also made its way into the top 25 in 2017, as the lithium producer's value rose to US$14.1 billion by the end of the year. By contrast, at the end of 2016, Albemarle was well outside the top 25 with a value of only US$9.68 billion. The company narrowed its guidance for full-year net sales and adjusted EBITDA after a strong performance in the third quarter despite Hurricane Harvey negatively affecting earnings.

With a new year ahead, China continues to represent the driving force behind the industry's fundamentals. No doubt, 2018 will be about evaluating opportunities and making the right business decisions to sustain the current market optimism.

Get the essential solution for Metals & Mining.