US utility commissioners: Who they are and how they impact regulation

State utility commissions are quasi-judicial agencies that were created to, among other things, oversee the rates charged by electric, gas and water utilities, which are essentially government-sanctioned monopolies. At the federal level, the Federal Energy Regulatory Commission plays a similar role.

Numerous factors may influence the degree of investor risk associated with utility commissions and their regulators, including the process through which they are selected, experience and background of the commissioners, and the amount of oversight they have been granted. Maintaining constructive relationships with regulators is key to utilities' financial performances. The tenor of these relationships can be greatly affected by the method and timing of the selection of individuals to serve on these agencies.

All else being equal, there is a greater degree of investor risk to jurisdictions in which commissioners are elected rather than appointed. Generally, energy regulatory issues are less politicized when they are not subject to debate in the context of an election. Involvement by the governor, state legislature, courts and the attorney general can further politicize the regulatory process. For example, following the wake of the controversy surrounding the February 2021 winter weather event, Texas enacted a wide range of legislation modifying various aspects of the commission, power generation and utility industry as a whole. Realistically, a candidate for commissioner who is sympathetic to the utilities and/or appears to be amenable to rate increases is not likely to be popular with the voting public. A high degree of turnover can also make for increased regulatory risk. 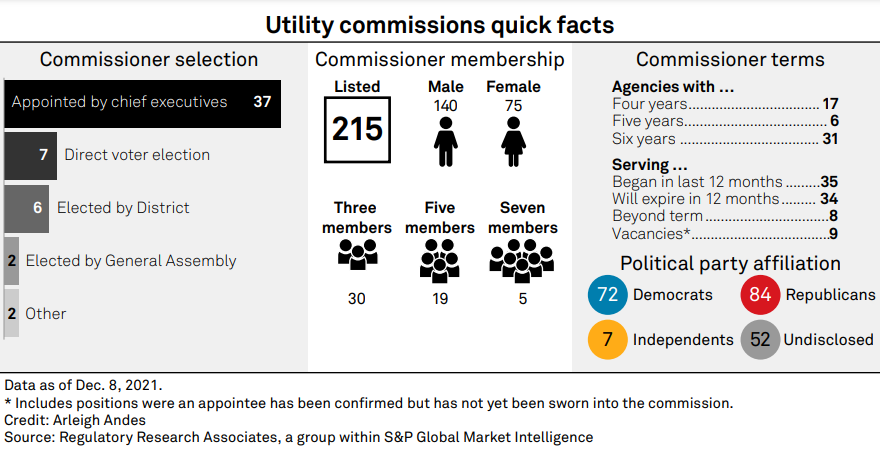 With the enactment of the new legislation, Commissioner David Jones — who was formerly a joint appointment between the governor, speaker and lieutenant governor — has become the second governor appointee under the language established in the bill. Additionally, on Sept. 22, Lt. Gov. Randy McNally appointed Dr. Clay Good to serve as the sixth and newest member of the PUC. Good is serving a term that extends to June 2026. The Speaker is to appoint the second additional commissioner.

Following the wake of the controversy surrounding the February 2021 winter weather event, Texas enacted a wide range of legislation modifying various aspects of the Public Utility Commission of Texas, the Electric Reliability Council of Texas Inc. and the utility industry as a whole. Specifically, Gov. Greg Abbott, a Republican, signed Senate Bill 2154 into law on June 18. The legislation increases the number of commissioners on the PUC to five from three and changes some of the prerequisites for commission membership.

On Aug. 6, Abbott appointed the first new commissioner, Jimmy Glotfelty, to serve a term that extends to Aug. 2025. Glotfelty's appointment to the commission received Senate confirmation Aug. 11, and he began serving effectively immediately. There is currently one vacancy left at the commission, and current PUC member Lori Cobos is serving beyond a term that expired in August 2021.

In New York, under state law, the New York Public Service Commission membership may be expanded from five to seven, with no more than four members of a seven-member commission permitted to be from the same political party.

During a Feb. 11 commission meeting, the regulators adopted a resolution requesting that former Gov. Andrew Cuomo expand PSC membership to seven. The PSC sought to expand the commission in light of the numerous expanded responsibilities and initiatives tied to the energy transition. On June 10, the New York Senate confirmed all three of Cuomo's additional nominations to the commission. David Valesky, an independent, and Democrats John Maggiore and Rory Christian were confirmed to serve as commissioners for six-year terms extending to Feb. 1, 2027. In addition, Christian was appointed to head the agency.

For further details on the various utility commissions, refer to the Topical Special Report issued Dec. 13.

The corresponding data tables available here provide a complete listing and an overview of the selection processes at state and federal utility regulatory agencies, including the D.C. Public Service Commission and the New Orleans City Council. The tables are current through Dec. 8.

Already a Market Intelligence subscriber? For 2021 major enacted and vetoed energy legislation tracked by Regulatory Research Associates, a group within S&P Global Market Intelligence, for the first half of 2021, check out the state-by-state summary tables.

The Big Picture: Outlook & Predictions for 2022