Climate change physical risks are expected to vary widely across the globe. Existing hazards will likely increase in intensity in some regions, while other regions will become subject to hazards not previously experienced.

2020 is on track to become the warmest year yet on record, even without any major El Niño event – a factor that has contributed to most prior record warm years.[1]

From wildfires to hurricanes, extreme weather conditions are starting to have a material impact on the global financial system. The Financial Stability Board’s Task Force on Climate-related Financial Disclosures (TCFD) recommends companies should evaluate two main categories of climate risk: transitional and physical. Transitional risks are associated with any market, policy, or technology disruption resulting from actions taken to limit climate risk by delivering the low carbon economy. One such action is putting a price on carbon. Physical risks are associated with intensifying climate-related weather events like droughts, floods, wildfires, hurricanes, water stress and heatwaves.

Hundreds of Billions in Unpriced Carbon Costs Expected by 2050 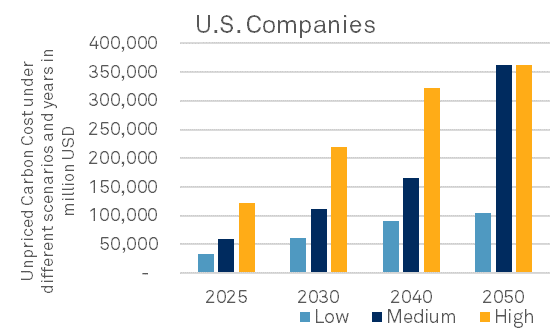 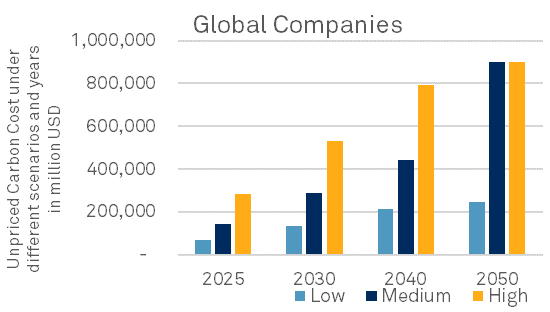 Carbon pricing mechanisms are an important policy tool to reduce GHG emissions and direct capital towards cleaner energy and lower-carbon solutions. Globally, there are currently 57 carbon pricing schemes either in operation or scheduled for implementation at a regional, national, or sub-national level, covering approximately 20% of global GHG emissions.[2] According to the World Bank, however, both the amount of emissions covered by carbon pricing and the price levels are still too low to meet the objectives of the 2015 Paris Agreement to strengthen the global response to the threat of climate change by keeping a global temperature rise this century well below 2 degrees Celsius above pre-industrial levels and to pursue efforts to limit the temperature increase even further to 1.5 degrees Celsius. Carbon pricing policies are likely to ramp up as regions seek to achieve their Nationally Determined Contributions (NDCs) to reduce emissions and deliver on the Paris Agreement.

To help stakeholders navigate carbon pricing risk, Trucost has quantified current pricing schemes in over 130 regions together with potential future carbon pricing scenarios required to deliver the Paris Agreement. The dataset is used by companies to stress test their ability to absorb future costs and get ahead of carbon pricing risk. Investors typically apply the dataset at the portfolio level to assess portfolio earnings at risk and identify company outliers. Integral to this analysis is the quantification of an Unpriced Carbon Cost (UCC) – the difference between what a company pays for emitting carbon today and what it may pay in the future.

The UCC varies depending on the sector a company operates in and its geographical locations (i.e., where it emits). It also depends on the scenario and reference year chosen. Three scenarios are presented: Low, Moderate, and High. By 2050, both Moderate and High scenarios arrive at a price deemed to be sufficient to keep global warming to within 2°C above pre-industrial levels (in the former, action is delayed in the short term). The Low scenario is not 2°C aligned but assumes the implementation of the NDCs.

Under the High pricing scenario, the 500 largest U.S. companies face US$122 billion in UCC in 2025, equating to 11% of earnings. For the 1,200 largest global companies, that figure is approximately $284 billion, representing 13% of earnings. By 2050, the UCCs balloon to $363 billion and $898 billion for U.S. and global companies, respectively, under both the Moderate and High pricing scenario.

Minority of Companies Have Set Internal Carbon Prices, but More Plan to Do So in Next Two Years

% OF COMPANIES SETTING A CARBON PRICE

A Paris Alignment assessment looks at companies' alignment with the Paris Agreement goal to limit global warming to well below 2°C from pre-industrial levels. The approach taken by Trucost is a transition pathway assessment, which examines the adequacy of emissions reductions over time in meeting a 2°C carbon budget. For this analysis, a medium-term time horizon was applied, informed by seven years of historical data and seven years of projected future emissions.

Heatwave and Water Stress Are Greatest Drivers of Physical Risk for Both U.S. and Global Companies

PHYSICAL RISK SCORE BY CLIMATE RISK INDICATOR IN 2050 UNDER RCP 8.5

Climate change physical risks are expected to vary widely across the globe. Existing hazards will likely increase in intensity in some regions, while other regions will become subject to hazards not previously experienced. These changes, combined with the increasingly global nature of corporate operations and supply chains, may present significant variation in the intensity and range of physical risk exposures across global capital markets.

Some sectors are more at risk than others, but it depends on the specific type of hazard in question. Certain predictions for rising sea levels, for example, show a possible change of 1.5 meters beyond 2100, which could affect a large portion of lower Manhattan and a great deal of real estate around the world. Heatwaves and wildfires, on the other hand, could have a serious impact on the power grid and electricity producers. In addition, floods and droughts could affect power stations, as well as farmers.

Trucost analyzed the average asset-level physical risk exposure of the 500 largest U.S. companies and 1,200 largest global companies under a High Climate Change scenario (the so-called RCP 8.5 global warming scenario) by 2050, which would occur if fossil fuels continue to dominate and emissions continue to rise. Companies are scored from 1 to 100 for each of the seven risk types (water stress, wildfire, flood, heatwave, coldwave, hurricane and coastal flood). A score of 100 indicates the highest possible exposure and sensitivity to a given risk, while 1 indicates the lowest.