Quibi's bold bet to take a quick bite out of the subscription video market quickly fizzled out as the service lasted less than a year before going dark in December 2020. The company raised about $1.75 billion in venture capital funding and presold its first year of advertising for a reported $150 million, but that war chest of roughly $2 billion proved to be too little to crack the hypercompetitive U.S. subscription video-on-demand arena. Quibi launched in April 2020 but disclosed plans to shutter its service just six months later in October, noting that it would return about $350 million in remaining cash on hand to its investors.

Quibi had numerous tailwinds behind it — including high profile execs such as Jeffrey Katzenberg and Meg Whitman and a content budget of over $1 billion — but the service ultimately failed to gain any real traction among paid subscribers in its short operating history. The company's "quick bites" approach of offering TV shows and movies produced in short episodic segments 5 minutes to 10 minutes in length was intended to reach a young, mobile audience on the go but may have lost some appeal with many consumers homebound during the pandemic.

Survey data also revealed heavy overlap between Quibi users and usage of other SVOD services such as Netflix Inc., Amazon.com Inc.'s Prime Video, Hulu LLC and The Walt Disney Co.'s Disney+. While that might appear to be a positive at first glance — backing up Quibi's thesis that a mobile-first service targeted at young viewers could be a complement and not a competitor to big incumbent SVOD services — much of Quibi's usage was likely stemming from free trial users kicking the tires who churned out when the promotional trial period expired.

Nearly 90% of Quibi users were also Netflix subscribers, and Amazon Prime Video, Hulu and Disney+ saw significant overlap in user bases as well. American consumers have demonstrated a voracious appetite for SVOD services, but some households could be reaching a saturation point where encouraging them to subscribe to additional offerings — especially smaller services with a limited content catalog — may present a challenge. 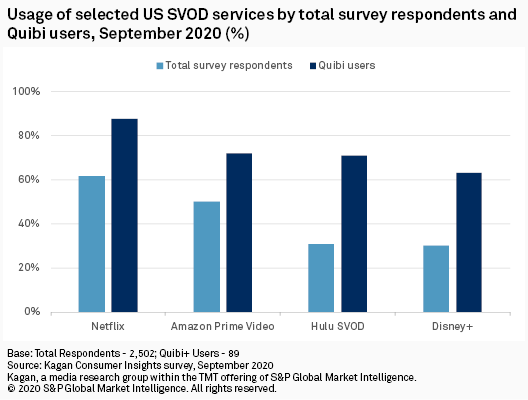 Quibi's content library was also limited, launching with roughly 50 hours of content versus tens of thousands of hours of content at rivals such as Amazon Prime Video, Netflix and Hulu. Unlike new services launched by Disney and AT&T Inc., Quibi had no existing catalog of content to underpin its offering and was building its library from scratch. Quibi's $4.99/month ad-supported tier was at the low end of the SVOD pricing spectrum but faced difficult comparisons to other ad-supported base tiers from CBS All Access, Hulu and Peacock Premium at similar price points, each of which offered far more content and programming than Quibi. 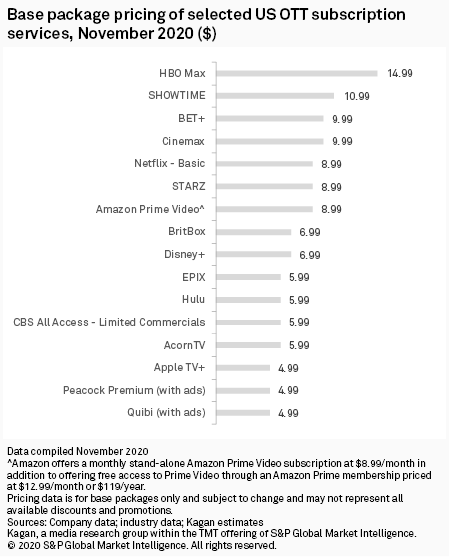 Quibi joins a relatively short list of major U.S. SVOD and ad-supported services that have closed in recent years, including similar mobile-first offerings geared toward younger viewers such as Verizon Communications Inc.'s Go90 service and Vessel. While massive amounts of video content are consumed on mobile devices each month in the U.S., especially among younger demographics, luring viewers away from their favorite creators and channels on YouTube, Facebook, Snapchat and TikTok has proven difficult. 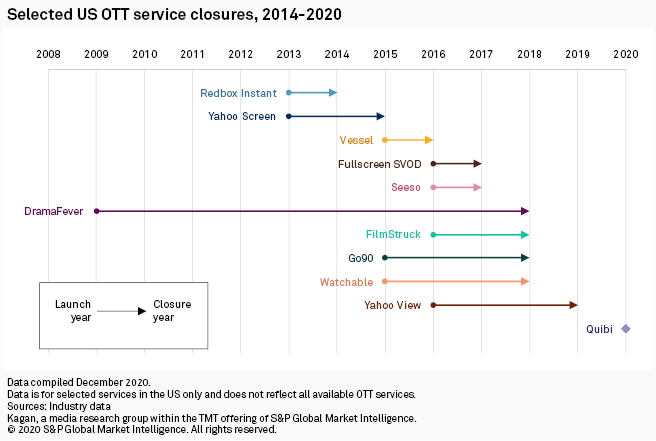 Survey data presented in this article is from Kagan's U.S. Consumer Insights surveys conducted in September 2020. The online survey included 2,502 U.S. internet adults matched by age and gender to the U.S. Census. The survey results have a margin of error of +/-1.9 percentage points at the 95% confidence level. Percentages are rounded up to the nearest whole number.