Claro Brasil and Vrio Corp. executives estimated the number of virtual multichannel subscribers they had between them in Brazil was between 700,000 and 800,000. This includes their Claro tv+ (box and app) and DIRECTV GO offers.

Globo's Fernando Ramos expects the Brazilian market to see a partial recovery of pay TV cord cutters to virtual multichannel, similar to the U.S., but at a much faster rate due to regulatory restrictions, which make traditional platforms less appealing to operators from a business standpoint, as well as consumer habits moving online.

Another key announcement at the Pay TV Forum came from Sky Brasil President Raphael Denadai on the company's plans to launch fiber-to-the-home broadband services "within the next few days," leasing the network from a yet undisclosed neutral provider.

The Brazilian pay TV market is expected to rapidly shift from traditional multichannel platforms to virtual multichannel over the next few years, according to executives who spoke at the Pay TV Forum 2022 conference, held in São Paulo Aug. 3-4. The market's few remaining major operators are doubling down on their streaming strategies as they face regulatory restrictions that limit the profitability of traditional pay TV services as well as competition from over-the-top platforms.

Claro Brasil's Regional Director for Residential Operations Ricardo Falcão and Vrio Corp.'s Chief Marketing Officer Gustavo Fonseca estimated the number of virtual multichannel subscribers they had between them in Brazil was between 700,000 and 800,000. The number includes subscribers of Vrio's DIRECTV GO, launched in Brazil in November 2020, and Claro's two linear streaming products. These are Claro Box, a set-top box-based platform launched in early 2021, as well as its more recent iteration, Claro tv+, which launched in May 2022 as both a box version and an app-only version.

For a detailed overview of the two virtual multichannel services, please read our coverage of the Brasil Streaming 2022 conference in May.

This is equivalent to Brazil's total traditional multichannel market 12-month net loss of 798,948 to June 2022, regulator Anatel reported. Pay TV subscriber losses have slowed in 2022, down from 918,559 in the first six months of 2021 to 349,024 this year, according to the regulator. However, this is likely due to the efforts of two direct-to-home providers, Vrio's SKY Brasil and Oi, to migrate prepaid households to postpaid services as they were the only major pay TV operators to report subscriber gains during 2022. 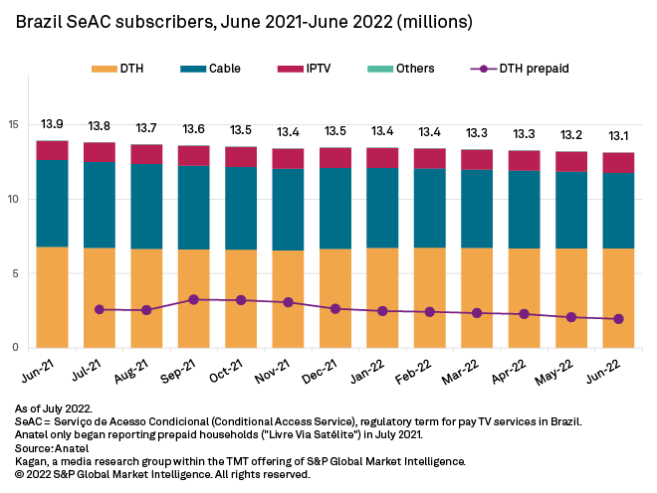 Broadcaster Globo's Director of Strategic Partnerships and Distribution Fernando Ramos cited Kagan's estimates for the U.S. market where virtual multichannel platforms, many run by the same operators, recovered almost half of traditional multichannel subscribers lost to cord cutting between 2016 and 2021. Ramos expects the Brazilian market to see a similar shift but at a much faster rate due to regulatory restrictions, which make traditional platforms less appealing to operators from a business standpoint, as well as consumer habits moving online.

Already a client? For more on our coverage of U.S. traditional and virtual multichannel market trends as well as detailed definitions of the two terms and other video user types, please read our latest US video home forecast report. 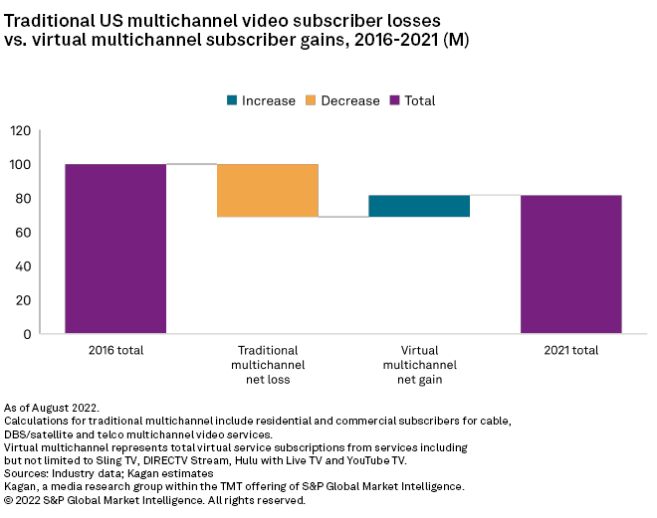 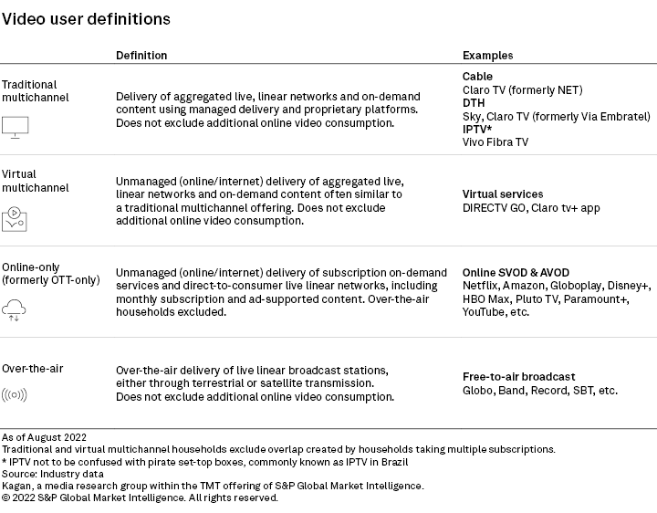 "We expect to balance out the two subscriber bases by year-end 2023," said Claro Brasil's Ricardo Falcão, adding that the virtual multichannel and streaming box offers already represent half of the multiple system operator's new sales. The América Móvil subsidiary is Brazil's largest multichannel operator with a total of 5.6 million subscribers as of June 2022, including sister-company Claro TV Brasil's DTH subscriber base.

Brazil's current regulatory framework for pay TV services dates back to 2011's Lei do SeAC, or Conditional Access Services Law, which replaced the myriad different regulations that governed each multichannel platform technology separately. Although this was the same year streaming giant Netflix Inc. first launched in Latin America and Caribbean, OTT streaming services were not included in the new law. This meant that, unlike traditional multichannel platforms, they would not be treated and taxed as telecommunications services by regulators, but as value-added services.

The law, which had been under discussion for a decade, also introduced several local content quotas for multichannel providers as well as solidified rules that banned distribution and programming, or operators and networks, being under the control of the same group. This clashed with international market trends that saw an increasing number of pay TV operators vying for exclusive content.

The Lei do SeAc led to rapid growth in multichannel adoption in Brazil from 12.8 million households in 2011 to 19.5 million in 2014, largely due to the emergence of affordable DTH services, including prepaid offers. However, cord cutting has since reverted any gains. As one speaker pointed out, Netflix alone has more subscribers in Brazil today than pay TV operators ever had in total, even at their peak. 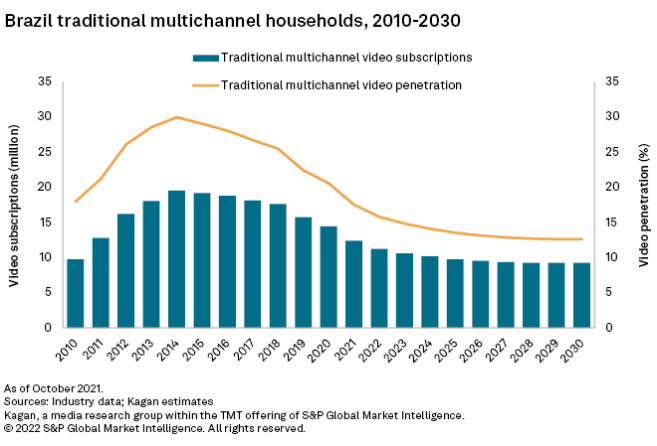 Speakers at the Pay TV Forum agreed that, with changes to the law unlikely to come soon, Brazilian operators will increasingly migrate to virtual multichannel to reduce both regulatory and operational costs. The difference in rules has already allowed DIRECTV GO to begin launching its own exclusive channels, such as DSports, with exclusive sports rights, and DNews.

But even pay TV consumption is still 24% higher than ad-based video on demand and 17% higher than subscription video on demand, according to Kantar Ibope Media. This is despite the service's limited penetration, which Kagan estimates reached 17.5% in 2021.

"Linear is still very popular, so much so that we had record ratings last night," said Vrio's Gustavo Fonseca, referring to the previous evening's match between Brazil's most popular football clubs, Flamengo and Corinthians, for the continental Copa Libertadores league. The match aired on two channels that DIRECTV GO carries: FTA broadcaster SBT and premium network Conmebol TV. "We are investing heavily on the linear experience, which wasn't an obvious move five years ago," Fonseca said of when the company first began discussing the virtual offer, following the launch of DIRECTV Now in the U.S. by then-parent company AT&T Inc.

Sports content is a key attraction of linear programming, especially in football-mad Brazil where competition for sports rights has exploded in recent years, even among non-linear programmers. Paramount+ is the most recent streaming entrant in the Brazilian sports rights market, having recently acquired a four-year contract for the two Latin American club championships, Copa Libertadores and Copa Sul Americana. The multichannel and streaming rights for the two Conmebol properties will be shared with Walt Disney Co.'s ESPN and Star+, while Globo secured the FTA broadcasting rights for select matches after a dispute with the league during the pandemic that lost the broadcaster transmission rights for the past two years.

"By year-end, our revenues from streaming will be larger than from traditional channels," said Paramount Global's Multiplatform Ad Sales SVP for Latin America and Brazil Country Manager Fabricio Proti, referring to the company's two streaming platforms, Paramount+ and the linear AVOD service PlutoTV. According to the executive, PlutoTV has found great success in Brazil, attracting more ad spending than the company's traditional multichannel networks and several local content providers. "Only 40% of PlutoTV content is ours," Proti said.

Another key announcement at the Pay TV Forum came from Sky Brasil President Raphael Denadai on the company's plans to launch fiber-to-the-home broadband services "within the next few days," leasing the network from Telefônca Brasil's FiBrasil, a business that has recently boomed in the region. "Werthein Group has investment capacity," said the executive about Vrio's parent company, the Argentinean group that acquired the DIRECTV Latin America operation from AT&T in 2021 with plenty of expansion plans for both the DTH and the virtual multichannel products.

The company already provides broadband services in Brazil over fixed wireless LTE and in Argentina, where DIRECTV Argentina operates both fixed wireless and fiber services, the latter only in the town of Godoy Cruz in Mendoza. In Colombia, AT&T sold DIRECTV Colombia's fixed wireless broadband operation to Telefónica Colombia in May 2021.

Sky Brasil is also entering the wholesale market, as the company entered an agreement with broadcasters to lease capacity on its SKY-B1 satellite. Broadcasters must migrate their FTA satellite signals to Ku-band due to C-band spectrum being used for 5G services in Brazil. For Sky, the deal will allow the company to expand their prepaid multichannel offer to former FTA-only users, as well as help cover satellite maintenance costs.