AT&T Inc.'s agreement to sell Crunchyroll to Sony Corp.-controlled Funimation Global Group LLC for about $1.18 billion capped a busy 2020: the year saw three major deals worth a combined $1.74 billion. Crunchyroll's price tag was second only to Google's $1.65 billion purchase of YouTube in 2006. Comcast Corp. purchasing Xumo in February 2020 for an estimated $125.0 million and Fox Corp.'s acquisition of Tubi in April 2020 for $440.0 million represented smaller but strategically important buys for big media operators looking to expand into the rapidly growing ad-supported video on demand, or AVOD, sector.

Kagan has tracked 13 major deals involving over-the-top video services since 2006 representing just over $6 billion in value, with activity falling into three broad phases. Deals in 2006-2010 were early bets when OTT video was still in its infancy. In 2011-2015, multiple YouTube multichannel networks with big audiences, such as Maker Studios and Fullscreen, were snapped up in a speculative land grab. The market was then relatively quiet until 2019, when Viacom's purchase of Pluto TV helped to kick-start a string of purchases of AVOD services and platforms including Crackle, Xumo and Tubi.

Please note that deals tracked here are for SVOD and AVOD services only, not transactional platforms such as VUDU, and are deals in which at least a majority stake is acquired, which rules out The Walt Disney Co.'s 2019 purchase of 9.5% of Hulu LLC from AT&T for $1.43 billion. 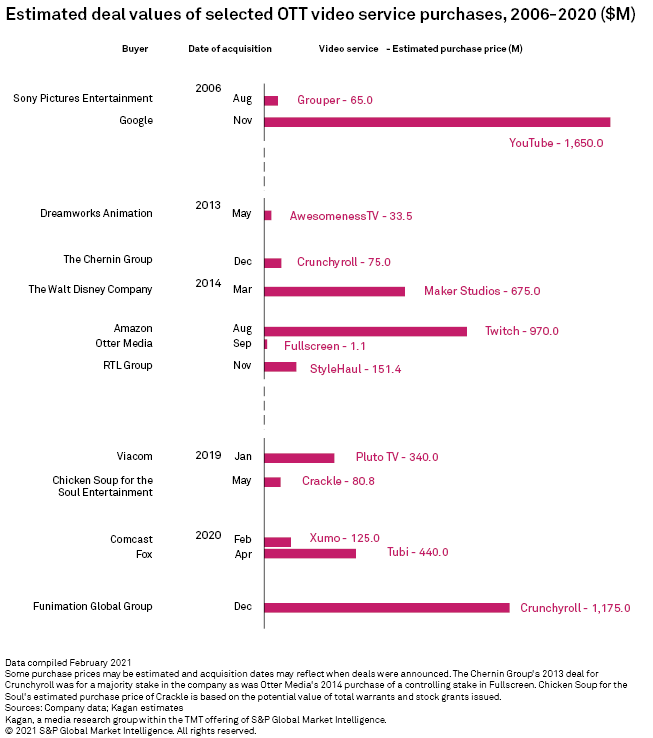 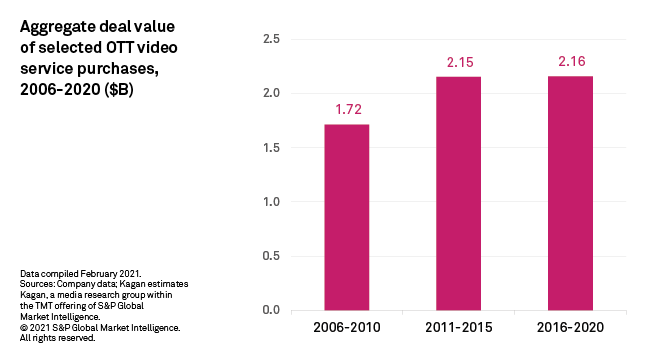 Applying standard deal valuation metrics involving earnings or cash flow is next to impossible for deals in the OTT video sector, but valuations based on the price paid per monthly active viewer at the time of purchase are possible. Google's purchase of YouTube tops all deals at an estimated $82.50/monthly active viewer, but the 2020 transaction for Crunchyroll was not far behind at $58.75/viewer. Other high-profile 2019 and 2020 deals involving Pluto TV, Xumo and Tubi generally came in at the higher end of valuations and ranged from about $18 to $36/viewer. 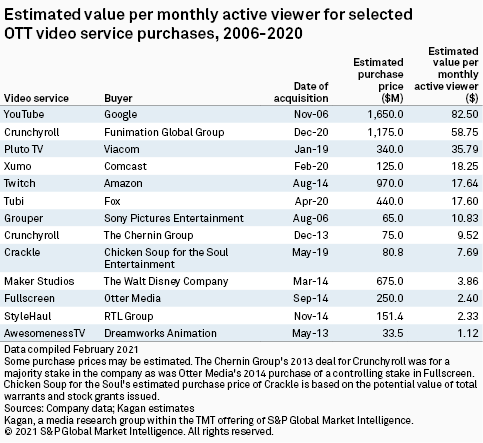 OTT deals also stacked up well with broader digital media purchases, including what were eye-popping offers at the time for startups such as Instagram and WhatsApp. While no digital media deal may likely ever surpass the $187.89/user that Yahoo paid for GeoCities back in 1999 during the dot-com boom, deals for YouTube and Crunchyroll did surpass the estimated $42.22/user that Facebook Inc. paid for WhatsApp in 2013 as well as the $33.33/user Facebook ponied up for Instagram in 2012. 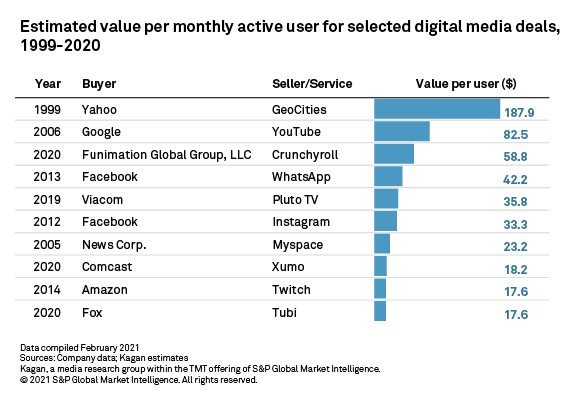 2021 could see additional deals in the OTT sector as some operators look for scale while others could continue to sell off video assets that they do not see as core to their primary OTT strategy — such as AT&T's decision to sell Crunchyroll to focus on HBO Max. Niche operator Cinedigm Corp. has already been active in 2021 and unveiled a planned acquisition to buy Fandor and completed the acquisition of horror specialist Screambox for undisclosed sums.

Valuations could be challenged to reach the relatively lofty levels that Crunchyroll achieved, however. Crunchyroll is a top destination in the growing anime niche and claimed to have more than 3 million global paid subscribers as of December 2020 and over 90 million registered users across its SVOD and AVOD offerings, with its diversified revenue streams and large global audience likely boosting its price tag and valuation past what many other services might command.