Based on Oct. 11 reporting, if Nexstar Media Group Inc. and Verizon Communications Inc. are unable to reach a retransmission agreement by the 11:59 p.m. ET deadline on Oct. 14, an estimated 1.6 million Verizon FiOS video subscribers in 11 East Coast TV markets could lose access to 14 TV stations owned by Nexstar. 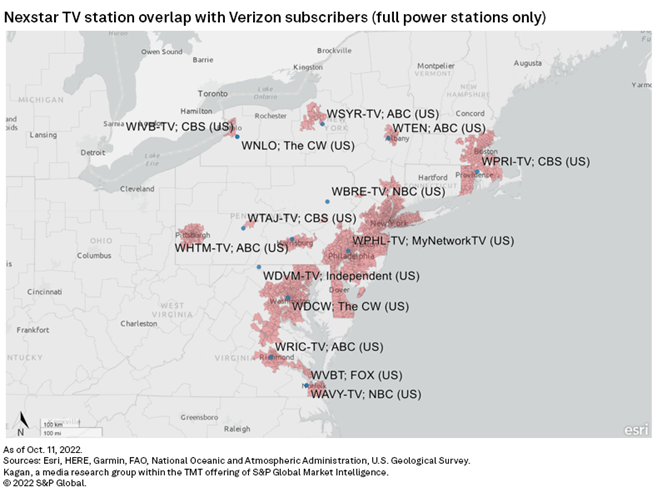 Broadcasters are continuing to ask for higher retrans rates in retrans renewals to offset the shift of household viewing habits and subscription dollars to streaming video services. This often leads to contentious negotiations in contract renewals.

MediaCensus video subscriber estimates as of the second quarter of 2022 show that the potential impact of a retrans disruption between Nexstar and Verizon represents 22.3% of Nexstar's total multichannel video sub overlap in those 11 TV markets. Using an average of $4.25 to $6.25 per sub per month in retrans fees, a disruption that leads to Nexstar pulling its stations from Verizon FiOS video packages could have a financial impact of $79.4 million to $116.7 million annually. Kagan estimates total 2022 gross retrans revenue of $377.6 million for the 14 Nexstar stations in those 11 overlapping Verizon FiOS video markets, which includes virtual multichannel carriage fees.

Based on Kagan estimates, Nexstar's TV stations in overlapping Verizon FiOS video subscriber markets averaged $4.19 per sub per month in gross retrans fees as of the second quarter of 2022. The fees vary based on affiliation, however, as ABC, CBS, FOX and NBC rates are much higher than The CW and MyNetworkTV, or independent station rates.

In the second quarter, the average year-over-year retrans per sub rate increase among the 11 publicly traded U.S. TV station groups was 17.0% on a station/network basis, with Nexstar TV station retrans rates growing 15.6% on average.

On the advertising side, a potential retrans disruption for Nexstar only a few weeks away from the 2022 midterm election day on Nov. 8 could adversely impact the big push of political ad buys. In addition, its broadcast network affiliation partners might be forced into make-goods or lower ad rates during major sporting events and primetime programming from the loss in audience reach. Based on Kagan estimates, the 14 Nexstar TV stations overlapping Verizon FiOS markets are projected to generate $316.1 million in 2022 net ad revenue.

This year has been relatively quiet in terms of retrans disruptions. The last major dispute was between TEGNA Inc. and DISH Network Corp., which started Oct. 8, 2021 — impacting 3.4 million DISH subscribers — and was resolved Feb. 4, 2022, ahead of the Winter Olympics and Super Bowl broadcasts. Nexstar's last major retrans disruption was also with DISH back in December 2020, which affected 5.7 million subs and lasted 19 days.

For clients: Access the retrans sensitivity analysis in Excel format.