The Latin America and Caribbean region started back on the path to economic recovery in 2021 after the devastating effects of the COVID-19 pandemic in the previous year, signaling renewed growth for the broadband market and a continuation of the decline of its multichannel segment, as well as an increased push for consolidations in the dynamic Brazilian fiber market.

* Traditional multichannel penetration continued to drop in 2021 in the Latin America and Caribbean region, reaching 35.9%, or 66.5 million subscribers, at year's end. Penetration fell from 36.9% in 2020, mostly on the back of Brazil's 14.2% drop in pay TV subscribers.

* Cable remained the top access technology for pay TV in the region at a 51.1% market share, followed by direct-to-home with 38.6%. IPTV grew by 23.4% in terms of subscribers during the year, reaching 9.4% of the market.

* Grupo Televisa SAB's merger of its content assets with Univision Communications Inc. dominated the M&A scene, as well as the continued consolidation trend in Brazil's small ISP market and by multiple fiber network spinoffs across the region.

The region's largest economies started coming back from the impact of COVID-19 in 2021 but are not expected to fully recover to pre-pandemic levels until at least 2022. The Economic Commission for Latin America and the Caribbean, or ECLAC, pointed to a 6.2% GDP increase in 2021 for the region, after a 6.8% decline in the previous year, while S&P Global Ratings, a division of S&P Global, indicated in a recent report that the region's six largest economies, Argentina, Brazil, Chile, Colombia, Mexico and Peru, saw an average GDP increase of 6.6% in 2021, after falling 6.8% in 2020.

The economic situation in the region seemed to have little effect on existing trends in the region's multichannel and fixed broadband market during 2021. The long-running decline of multichannel subscriptions continued unabated, while fixed broadband connections increased across the whole region, pointing toward Latin America crossing the 50% fixed broadband penetration mark as soon as 2022. Continued restrictive conditions due to the ongoing pandemic, such as work from home mandates, that have increased the need for reliable, high-speed connectivity will likely aid this increase.

The prolonged effects of the pandemic as many people remained homebound coupled with relative economic improvement compared to 2020 saw Latin America's multichannel market reduce the drip of lost customers it has felt since 2017. Kagan estimates the region lost 862,407 multichannel customers in 2021, about half the 1.7 million it lost in 2020, with penetration dropping from 36.9% in 2020 to 35.9% of homes in 2021, for a total of 66.5 million pay TV subscriptions. Multichannel market penetration reached its heyday in Latin America in 2016 at 41.6% and has been seeing a steady decline since then, as new alternatives such as increasingly available streaming services take pay TV's place.

Brazil led the way in terms of cord cutting in the region, losing an estimated 14.2% of pay TV users, or 2.0 million, during the year, while the largest multichannel market in Latin America, Mexico, reported a 2.8% increase, adding 528,574 new subscriptions in 2021.

Cable kept the top spot as the main access technology for customers of multichannel services in the region, with 51.1% of the market in 2021, or 34.0 million, followed by DTH with 38.6%, or 25.7 million. Both main platforms, however, reported subscriber drops during the year, with cable losing 227,730 subscribers regionwide and DTH losing 1.8 million subscribers. IPTV, the emerging platform across Latin America, managed to partially offset the drop in regional pay TV subscribers by growing 23.4% during the year, or 1.2 million subscribers, reaching a market share of 9.4%, up from 7.6% the year before. 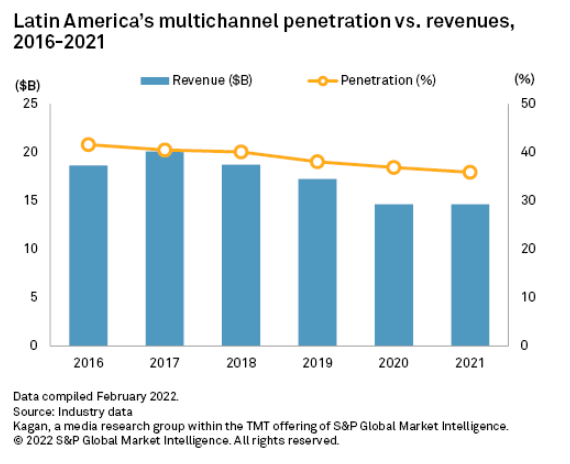 DTH's future in the region was also cast into further doubt as U.S. powerhouse AT&T Inc. decided during the year to sell its Vrio Corp., which operates the largest satellite business in Latin America.

The residential fixed broadband market in Latin America and the Caribbean continued to expand during 2021, aided in part by the growing need for connectivity brought about by the ongoing COVID-19 pandemic and work-from-home mandates, as well as the growth of over-the-top alternatives to multichannel across the region.

The region reached an estimated 48.2% residential fixed broadband market penetration during 2021, or 96.4 million households, a 6.8% growth year on year, and the market has been expanding at a 9.1% CAGR in the 10 years since 2011. The Latin America and the Caribbean region is expected to cross the 50% fixed broadband penetration mark as soon as 2022, according to Kagan estimates.

Cable remained the leading platform across the region, with 37.3 million subscribers or 38.7% of the fixed broadband market at the end of 2021. The platform retains high popularity across the region, but it is still expected to lose its number one position in 2022 to FTTH offerings, which have been growing at an accelerated pace in recent years. Fiber optics, thanks to its potential to offer higher speeds and symmetrical connections, reached 37.4% of the market in 2021, or 36.0 million subscribers, as the platform expanded at a 57.3% CAGR in the 10 years to 2021. 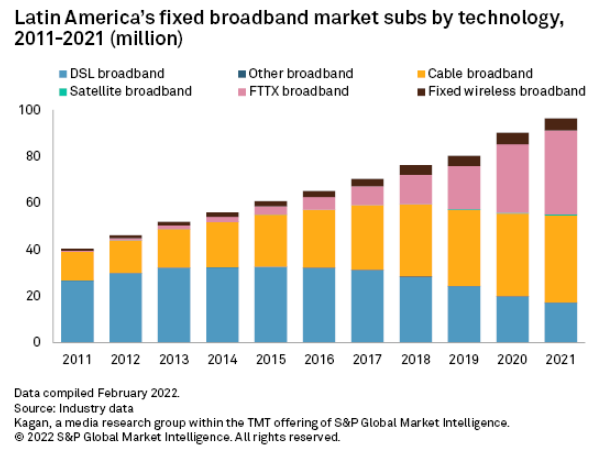 Another platform that has been gaining strength across the region is fixed wireless solutions, which has grown at a 19.3% CAGR since 2011 and is estimated to account for 5.2 million subscribers, or 5.4% of the market. This growth is mainly due to a decision by local mobile players to deploy the technology to complement their mobile services as well as a result of public policies such as Mexico's Red Compartida, operated by Altan Redes SAPI de CV. Newer generation satellite internet has also been gaining ground, expanding thanks to new market participants and the ability to provide service in remote areas of the continent, although the platform only accounted for an estimated 0.5% of the market in 2021 and is expected to remain a niche player for the foreseeable future.

Brazil remained the largest fixed broadband market in the region during 2021, with 36.3 million subscriptions generating $6.44 billion in revenues, for an ARPU of $15.33 and a penetration of 49.4%, according to Kagan estimates. Mexico followed with 22.0 million subscribers, $4.11 billion in revenues and an ARPU of $16.19, with a segment penetration of 60.9%. Uruguay, one of the smallest mainland markets in the region by population, showed the highest penetration, with 84.4% of households subscribing to fixed broadband, or a total of 1.1 million subscriptions.

Already a client? Click here to read the full report, including detailed overviews of OTT and M&A developments in Latin America during 2021.

Pandemic boon as fiber to pass 62% global share by 2025, lags in North America