Is new ad tax a threat to Poland's media sector?


Is new ad tax a threat to Poland's media sector?

The biggest media companies in Poland pay 1.3% of their revenues in taxes. The new regulations would rise it to 4.0%

This bill is mainly targeted at global tech giants

The new regulation is unlikely to pose a threat to media companies in Poland.

Poland's newly proposed ad tax has spurred blackouts as a form of protest among leading commercial broadcasters and other media outlets. While the legislation is undergoing changes to account for the criticism, we took a look at the potential impact of the regulation as initially proposed. Our analysis indicates that the new regulation is unlikely to pose an existential threat to media companies in Poland.

The new ad tax is aimed at supporting Poland's national health service in the wake of COVID-19 and will support a fund for culture and heritage in the media sphere.

On Feb. 10, broadcasters and internet portals replaced their programming and content with a dark screen and the words "Media bez wyboru" (which translates to "Media without choice"). The proposal has also faced criticism from members of Poland's government, with part of the ruling coalition signaling they would not pass the bill as proposed. Beyond Poland, the bill has drawn attention on free speech grounds, as critics portray it as hobbling the financial viability of independent media while state media remains subsidized. The draft bill is purely fiscal and does not introduce free speech restrictions on programming content. Elsewhere in Europe, the common practice of state media subsidization has not excluded private media from the marketplace.

Still, Poland's government appears to be taking the criticism to heart. The Associated Press reported Feb. 16 that the tax plan will be redrawn to address concerns. The final rules are expected to be implemented July 1.

In 2019, the biggest media companies in Poland paid taxes equivalent to 1.3% of their total revenues. According to our estimates, the initially proposed regulations would have taken that tax rate to 4.0%. The tax on digital tech giants like Google LLC and Facebook Inc. would have increased from 1.8% to 6.6%. 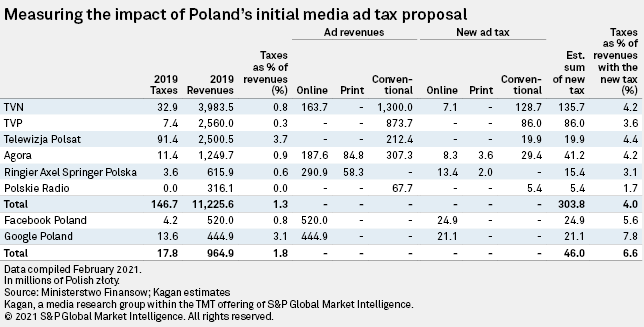 The newly proposed ad tax contains certain thresholds that would leave small, local media outlets largely unaffected. According to the Polish Local and Regional Television Association, only one of its 41 members will fall under the new taxation rules. The Local Newspapers Association said none of the 74 titles in its purview would be subject to this tax. Although the new tax will impact most local radio broadcasters — the majority of which earn ad revenues above the threshold — it will mainly target online ad providers like Google and Facebook.

Private broadcasters have pointed out that Polish state media receive 1.26 billion zlotys, or $339 million, from the pockets of Polish taxpayers each year, which the private media sector characterizes as creating an unequal competitive environment in the market. For perspective, however, similar funding is collected by state-owned media in other European countries such as the United Kingdom, where the British Broadcasting Corp. received 3.69 billion pounds sterling, or $5.1 billion, in 2019.

The new tax proposed in Poland is in line with the European Commission's Fair Taxation of the Digital Economy proposal, which aims to allow member states to tax profits generated in their territories, even if a company does not have a physical presence there. Similar taxes are already in force in other European countries. This bill mainly targets global tech giants, although local companies are not exempt once they reach a certain earnings threshold. Otherwise, a tax that only impacted big tech would be deemed discriminatory.

Is new ad tax a threat to Poland's media sector?