The subscription over-the-top market in Europe should continue growing over the next five years, reaching $14.5 billion in 2024

For the first time, Italy surpassed the Netherlands in subscriptions in 2019

The subscription over-the-top market in Europe should continue growing over the next five years, reaching $14.5 billion in 2024, according to Kagan estimates. Drivers behind this performance include the launch and expansion of direct-to-consumer services by global media and technology companies such as Apple Inc., The Walt Disney Co. and Comcast Corp.'s NBCUniversal. At the same time, local multichannel operators will keep making their video offerings available over the internet while broadcasters form alliances and launch joint projects. 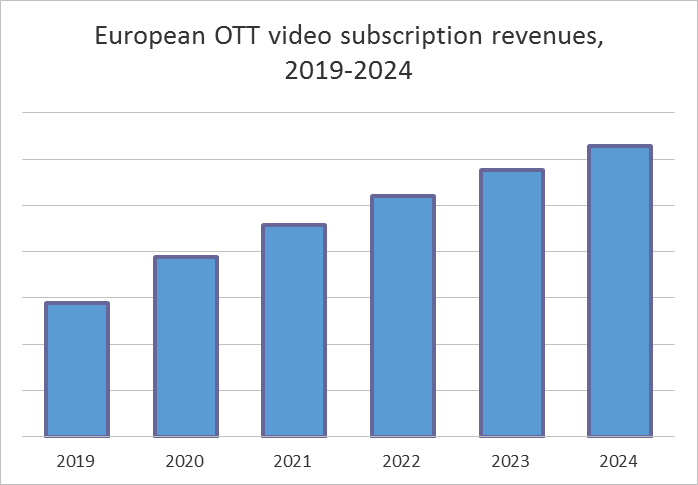 In its 2019 annual results, Netflix reported 51.8 million paid subscribers in the Europe, Middle East and Africa region. Kagan estimates approximately 85% of those subscribers come from the 18 markets in our coverage. Having spent $14.61 billion on programming globally, Netflix has secured the top place in most of our covered European markets other than Germany, Poland and Russia. In Germany, Amazon.com Inc.'s Prime Video is still ahead of Netflix after becoming part of Prime back in 2014. In central and Eastern Europe, incumbents have been able to compete with Netflix and Amazon by pricing their offerings competitively and investing in local programming.

In Europe, the availability of livestreaming content on OTT video platforms is becoming more and more prevalent, with examples ranging from sports in Perform Group Ltd.'s DAZN and Prime Video to full-fledged virtual pay TV services such as Comcast's Sky X (Austria), Zattoo Europa AG's Zattoo (Germany and Switzerland) and Cosmote SA's Cosmote TV OTT (Greece). The number of multichannel subscribers in the wider region has remained relatively flat since 2012, with half of the markets expected to grow over the next five years. European pay TV services are generally more affordable compared to their U.S.-based counterparts and are often bundled with fixed broadband and telephony, offering savings to consumers.

For the first time, Italy surpassed the Netherlands in subscriptions in 2019. This is due to the low multichannel penetration, limited choice of pay TV providers and numerous economical streaming options available in the Italian market. 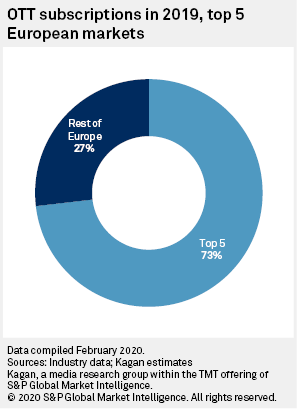