The year 2020 turned out to be a down year like no other at the box office. It started out with promise, with weekly box office growing in six out of the first nine weeks of the year. In week 10, the rumblings of the COVID-19 pandemic reaching U.S. shores began, and weekly box office declined 45.3%. In week 11, box office fell 57.5% and was under $100 million for the first time since week 50 in 2011. By week 12, nearly all theaters across the country had closed their doors as the nation went into lockdown. 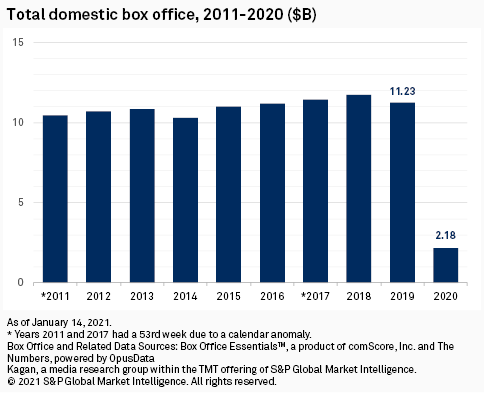 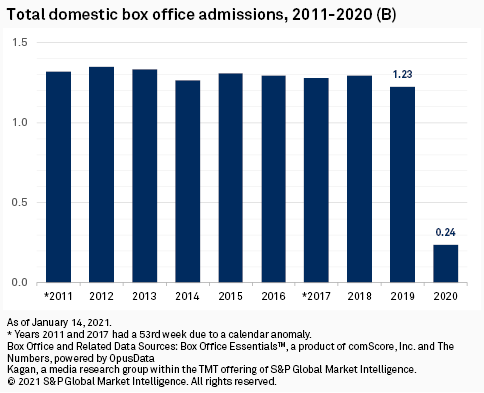 The spring season accounted for 86.6% of the box office total with nearly $1.89 billion. Most of the spring box office came in the first 11 weeks of the 17-week season. The season also had the most admissions of the year at 205.1 million.

Summer box office was obliterated in 2020, down 99.3% from $4.41 billion in 2019 to just $32.7 million. Summer is generally the biggest season of the year, normally accounting for 39% to 40% of the year's total box office. In 2020, the summer box office was just 1.5% of the total. Most theaters remained closed during this period and began to slowly reopen in late July and August at a reduced audience capacity. Studios intended to begin releasing major films in theaters again in July but kept pushing back release dates as pandemic lockdowns continued.

Finally, AT&T Inc.'s Warner Bros. committed to releasing "Tenet" over Labor Day weekend, but the film did not bring in huge numbers and prompted more studios to hold off on their release plans. Still, there were some films that continued to be released in theaters, and there were portions of the public willing to go watch them. The fall season ended up with a $136.8 million total gross, down 90.2% from $1.39 billion in 2019, but up compared to the dismal summer numbers.

The winter season proceeded in much the same way as the fall, with a handful of films getting a wide release and audiences shelling out $123.0 million for a theatrical experience in the midst of a pandemic. The winter season ended up falling 94.0% when compared to the $2.05 billion grossed in 2019. 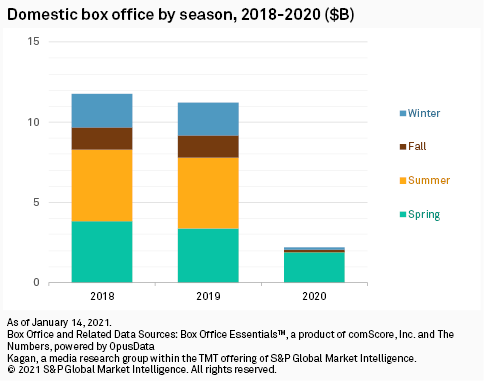 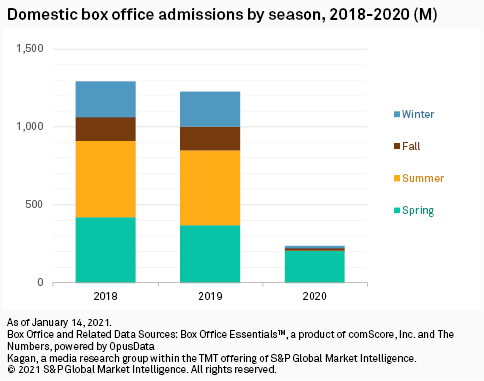 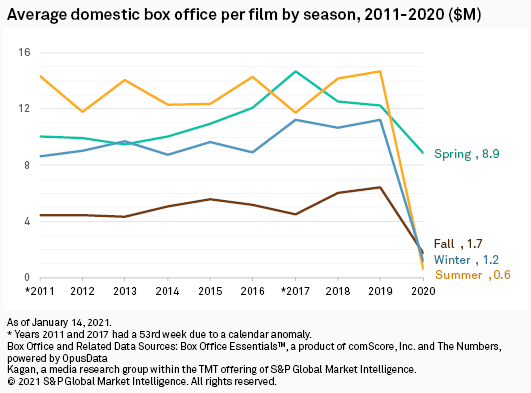 Rolling into 2021, the domestic box office is still at historically low levels, and COVID-19 cases remain on the rise even with a vaccine rolling out across the country. It seems that some studios may not be confident in a widescale vaccination effort going quick enough for a late spring rebound. Several releases that have already had their release dates rescheduled are once again being pushed back.

Metro-Goldwyn-Mayer Inc. announced in January that it will push back the release of the latest James Bond film, "No Time to Die," from April 2 to Oct. 8. The film was originally set for release on April 10, 2020, marking an 18-month delay due to the pandemic. ViacomCBS Inc.'s Paramount Pictures in late January moved horror sequel "A Quiet Place Part II" from April 23 to Sept. 17. The film has been moved several times since it was first announced as a release for March 20, 2020.

There are still a couple major films still on the calendar for March and April 2021, including "Raya and the Last Dragon" (March 5) and "Godzilla vs. Kong" (March 31). It's certainly possible more of these films will be pushed back, although increased vaccination efforts could help to keep these films on course.

There is no certainty when it comes to attaining a new normal, but there is hope that blockbusters will be populating theaters sooner rather than later.