Alphabet Inc., Facebook Inc. and other leading U.S. digital ad firms saw immediate impacts in March 2020 from COVID-19 as growth rates plummeted by 15% to 30% for the month. While most still managed healthy gains for the first quarter of 2020, shelter-in-place orders that blanketed much of America and the world for the second quarter of 2020 raises the possibility of the first annual decline in U.S. digital ad revenues since 2009. The health of the digital ad sector also has broad implications across the U.S. advertising ecosystem as a whole as digital advertising accounted for over 40% of total U.S. ad revenues in 2019 — far higher than the 11.4% share it held back in 2009 during the last recession.

International expansion has been key for Alphabet, Facebook and others, but the U.S. remains a vital market and accounts for 42.8% to 86.4% of total ad revenues for leading firms. Results varied by company, but most noted in first-quarter earnings calls that shutdowns related to COVID-19 negatively impacted U.S. results more than regions such as Asia. While certain sectors in the U.S. digital ad market fared better than others — ads related to e-commerce and gaming remained strong — and direct-response ads held up better than brand advertising, the sudden halt of much of the U.S. economy beginning in early March 2020 saw digital ad spend decelerate dramatically. 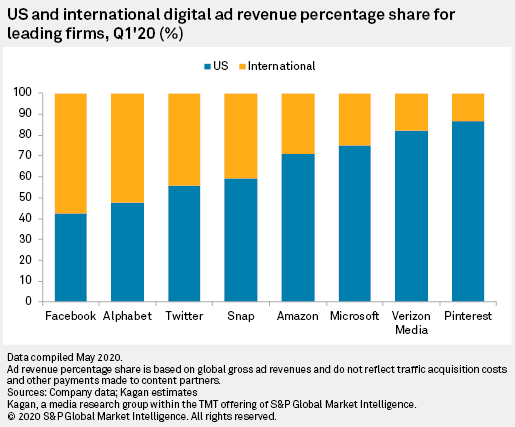 As severe as the impact of COVID-19 may be on U.S. digital ad revenues, the industry did have momentum on its side after growing 20% or more annually in both 2018 and 2019. Consolidation has resulted in the firms tracked here representing about 80% of total U.S. digital ad revenues each year since 2017, paced by Alphabet and Facebook and a hard-charging Amazon that has seen its digital ad business surge in recent years. Growing options for digital video advertising had helped the sector find continued gains in 2018 and 2019, as had a booming e-commerce market and the broad lift it provided for search ads. 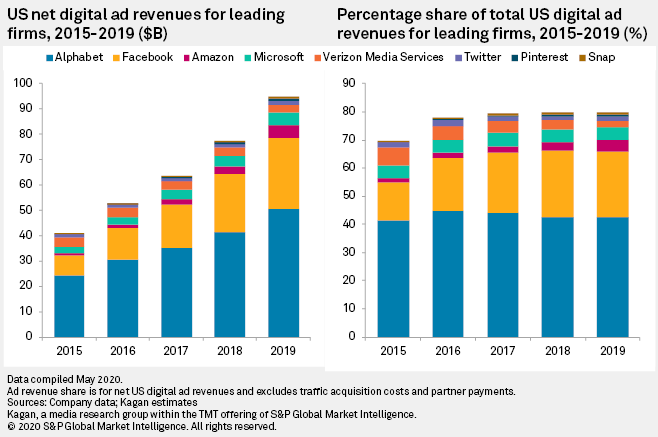 Past momentum aside, the sector faces serious headwinds in 2020 due to COVID-19, including shutdowns across most states from March to May; soaring unemployment; and uncertain prospects for industries including travel, tourism, sports, entertainment and retail. Additional shutdowns could be necessary in the second half of the year, and the economic ripples could negatively impact small and large advertisers alike through 2020 and beyond.

A case can be made for a relatively swift recovery for digital advertising, however, especially if the damage is largely limited to March, April and May of 2020 and advertisers continue to prioritize digital over other traditional formats. Additional fiscal stimulus efforts by the U.S. government could also play a significant role in the ultimate arc of digital ad revenues as 2020 unfolds.

Our scenario analysis below presents "bull," "middle-of-the-road" and "bear" case scenarios for estimated U.S. digital ad revenues in 2020. Our bull scenario assumes a quick recovery with annual growth rates back into positive territory by the third quarter of 2020 and most firms closing out 2020 with growth rates similar to what they experienced in January and February 2020. Our middle-of-the-road scenario assumes flat or negative growth through the third quarter and only a handful of firms returning to small gains by the fourth quarter of 2020. The bear scenario projects declines in annual growth rates persisting throughout 2020, with fourth-quarter 2020 ad revenues down about 10% to 20% annually for a majority of firms. 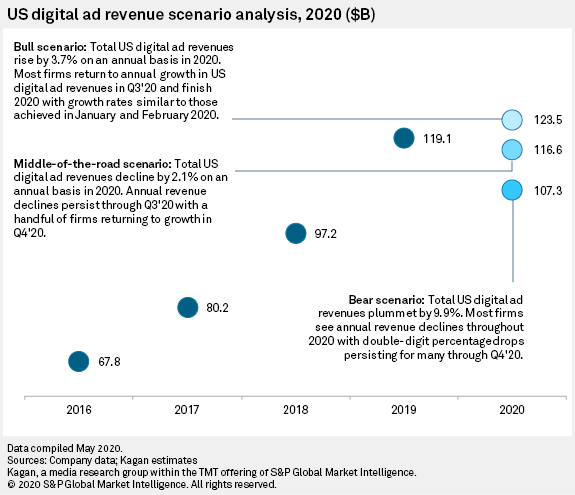 A bear outcome that sees digital ad industry revenues plunge by $11.84 billion in a single year may seem unlikely but is not without precedent. Direct-mail ad revenues dropped more than $10 billion in 2008-2009, and newspaper ad revenues fell by nearly $11 billion in the same time frame, with respective percentage drops of 19.2% and 28.0%. Digital ad revenues should fare better in 2020 due to targeting capabilities and massive reach across the daily lives of many American consumers, with growth of any sort in 2020 a victory given the unprecedented challenges presented by COVID-19.