Under the current conditions of the challenging broadcast deal market, the assistance of broadcast brokers has been more important than ever. Not counting Gray Television Inc.'s big consolidation deals, the first half of 2021 registered a total deal volume of $139.2 million — less than the average monthly deal volume in any of the years between 2011 and 2019.

More than half of that volume ($70.8 million) came from just 12 deals ranging from $2.5 million to $18.1 million — with nine of the 12 deals conducted with the assistance of broadcast brokers. 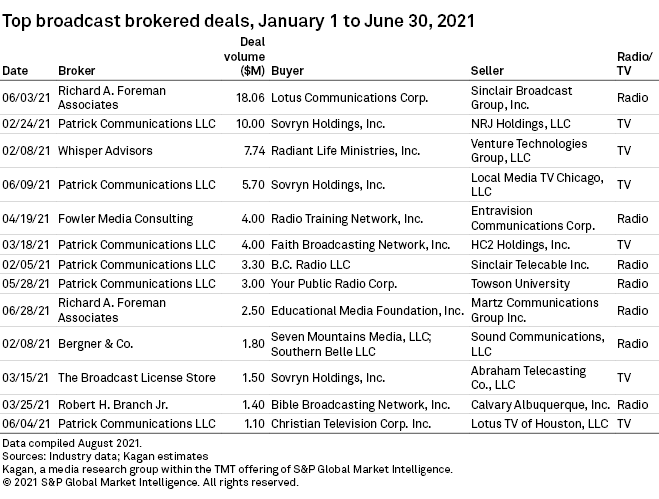 The largest radio deal of the first half of 2021 was brokered by Richard A. Foreman Associates Inc. On June 3, Sinclair Broadcast Group Inc. announced the sale of two AM and two FM stations in the Seattle-Tacoma, Wash., market to Lotus Communications Corporation for $18.1 million.

Aside from the Gray transactions, the largest TV transaction was Sovryn Holdings Inc.'s $10.0 million acquisition of two Class A TV stations in Los Angeles from NRJ Holdings LLC, brokered by Patrick Communications LLC.

Sovryn Holdings also bought a Class A TV station in the Chicago market from Local Media TV Chicago LLC for $5.70 million. That transaction too was brokered by Patrick Communications, which was part of no less than 14 of the 73 brokered transactions in the first half and — with a total of $29.4 million — the broker with the largest deal volume.

Whisper Advisors, a management consulting firm founded in 2017, logged its first entry in our broadcast broker database, facilitating the $7.7 million sale of a TV station in the Seattle-Tacoma, Wash., market from Venture Technologies Group LLC to Radiant Life Ministries Inc.

Fowler Media Consulting LLC brokered five deals, the largest one being the $4.0 million sale of an FM station in the Orlando, Fla., market from Entravision Communications Corp. to Radio Training Network Inc.

Bergner & Co. was the financial advisor for a large group sale in which seven FM and four AM radio stations, five FM translators and one FM booster in the New York markets of Elmira-Corning and Olean were sold from Sound Communications LLC to Seven Mountains Media of NY LLC and Southern Belle LLC for $1.8 million.

Robert H. Branch Jr. was the broker in the sale of an FM station in the Albuquerque, N.M., market from Calvary Albuquerque Inc. to Bible Broadcasting Network Inc. for $1.4 million.

Four other brokers, MyMediaBroker.com, Jorgenson Broadcast Brokerage, Griffin Media Brokers and Media Services Group Inc. registered a brokered deal volume above $1 million through a number of smaller deals. In July, at the beginning of the second half of the year, Hadden & Assoc. Inc. became the 12th broker of the year registering a million dollars or more. 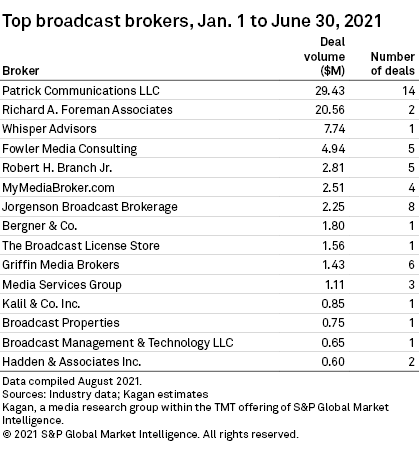