The iPhone 14 lineup was announced on Sept. 7, with four new models, three of which share the price points of their direct predecessors from the iPhone 13 lineup. While this might seem that the cost of buying an Apple smartphone would remain the same as it was prior to the 14 launch, the discontinuation of the budget-friendly iPhone 11 and iPhone 12 mini, along with the introduction of the iPhone 14 Plus, instead increased the median price for all iPhones by $100.

While price point shuffling took place for most models with the launch of the iPhone 14 lineup, a handful of those price adjustments created the biggest impact. While three price points under $900 were removed from the mix, a new $1,299 price point was created, and the $900-$1,199 price band gained three new devices in existing price points. With just these changes, Apple effectively raised the median price of its iPhones in total from $829 to $929. 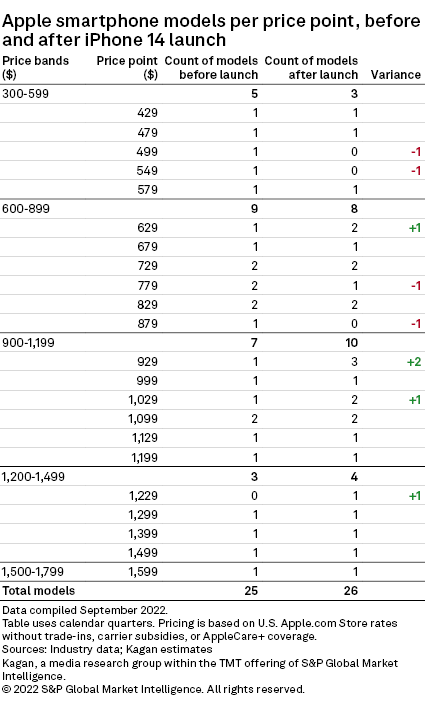 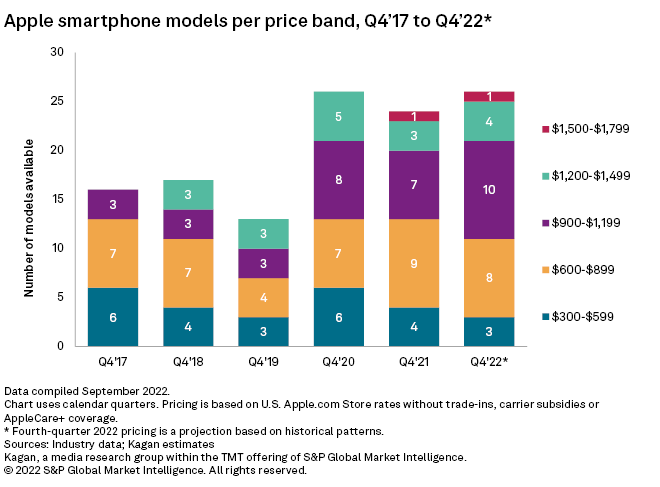 The price restructuring over the years resulted in more overlaps between the models across different storage capacity configurations. Note that Apple's smartphones typically have a fixed 64 GB or 128 GB storage capacity, but they also offer the same models with more storage capacity at higher prices. The main purpose of the price restructuring is to make upselling easier by providing a slightly better offering at a slightly higher cost. It could be for the same model with more storage or for the next level model at similar storage capacity. With the most recent pricing changes, the overlaps have moved toward the premium flagship price points, to nudge more customers toward picking up the highest margin products.

MI clients can access our full report that breaks out the historical pricing of individual Apple smartphone models as well as an analysis on Apple's pricing strategy for the iPhone segment.