The global fixed broadband market is on track to reach 1 billion subscribers by the end of 2020.

More than half of global fixed broadband homes subscribe to fiber services. 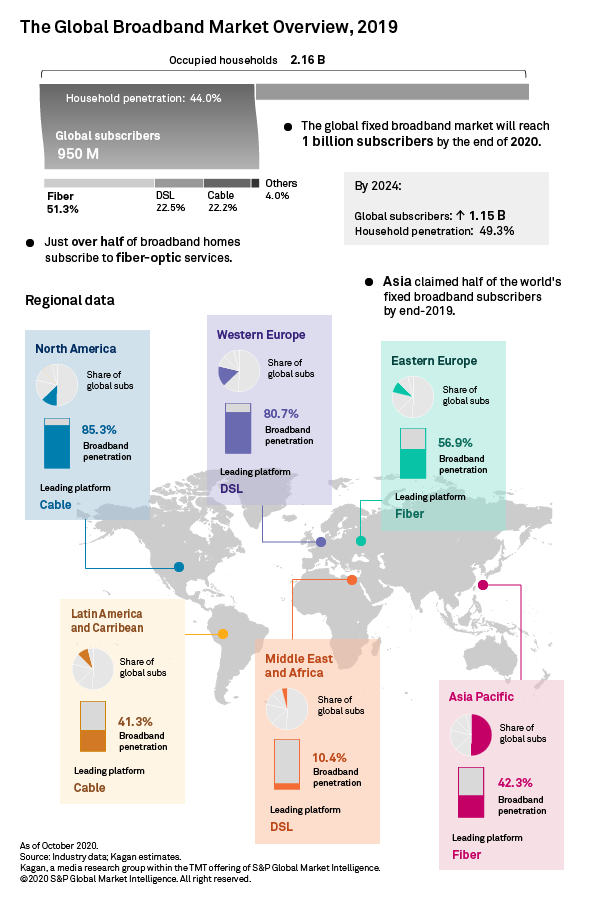 - Kagan's survey of over 80 major fixed broadband markets worldwide indicates the global market is forecast to reach the 1 billion subscriber milestone by the end of 2020.

- Fixed broadband revenue and ARPU projections for 30 markets (and counting), including a revenue breakdown by major platforms DSL, cable and fiber, were added to Kagan’s Global Multichannel Market profiles, as well as Ranking and Comparison Tables.

- More than half (51.3%) of global fixed broadband homes subscribed to fiber (fiber-to-the-premises) services at the end of 2019.

- Cable is modeled to overtake DSL as the second-largest broadband platform after fiber, by end-2020, as the global DSL market continues to decline.

- Asia Pacific now accounts for over half of the world's fixed broadband households, having breached that threshold at the end of 2019.

- Singapore is forecast to become the first market to have all fixed broadband homes subscribing to fiber services by end-2020, a milestone enabled by the universal deployment of the National Broadband Network. 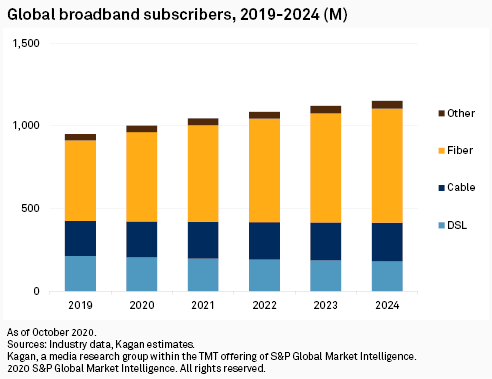 Fiber-to-the-premises, or FTTP, which includes fiber-to-the-home, or FTTH, and fiber-to-the-building, or FTTB, connections, remains the leading and the fastest-growing fixed broadband platform on a global scale. By the end of 2019 fiber became the connection of choice for over half (51.3%) of the global broadband households. 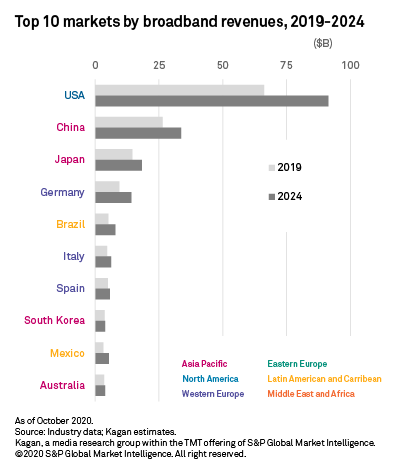 In 2020, Kagan added 10-year projections and historical estimates for fixed broadband revenues and ARPUs for over 30 markets. This data, located in our Global Multichannel Market profiles as well as Ranking and Comparison Tables, includes revenue breakdowns by DSL, cable and fiber.

The USA is by far the most lucrative broadband market in the world despite being second in size to China, thanks to its high service ARPUs. Kagan estimates that in 2019 U.S. ISPs generated $71.5 billion in broadband service revenues, equating to a monthly ARPU of $56.02—the highest in the world. Service providers in the country have seen a jump in overall revenue and average rates as consumers opt for faster, more expensive tiers and lease more sophisticated routers for Wi-Fi networks. Operators have also pushed rate hikes, seizing on appetites for bandwidth to increase ARPU. The U.S. is also the most lucrative multichannel market in the world, despite being third in pay TV subscribers after China and India.

In Asia-Pacific, the average download speeds for fixed broadband fell for most countries during March and April 2020, when the pandemic was at its peak in most parts of the region, according to the Ookla Speedtest Global Index. With the exception of India, internet speeds began to recover in most markets across the region in April or May, and by the end of June had even reached new all-time highs according to Ookla. Singapore boasts the highest average download speeds in the world at 226.6 Mbps as of September 2020, largely driven by its transition to fiber. On the flip side, Pakistan has the slowest average speed in APAC at 10.10 Mbps. As of September 2020, Turkmenistan had the slowest average fixed broadband speed in the world, according to Ookla, at just 3.4 Mbps.

In the U.S., approximately 76% of residential wireline broadband subscribers had access to download speeds of 100 Mbps or higher (full article here) as of the end of 2019 (nearly 6% subscribed to 1-Gig tiers), which made most homes relatively well prepared to face shelter-in-place conditions during the COVID-19 pandemic. However, cable broadband households, on average, subscribed to higher speeds than telco homes.

Elsewhere in the world, the growth of superfast fixed broadband is accelerating in Latin America's five largest fixed broadband markets — Argentina, Mexico, Brazil, Chile and Colombia — with top-tier offerings growing at up to 10 times the pace of the overall market in each country. However, these top tier services still represent a very small percentage of total subscribers in these markets.

In Eastern Europe, fixed broadband connection speeds have risen steadily in recent years, with Hungary, Latvia, Lithuania and Estonia leading the pack with average speeds exceeding 30 Mbps as of 2019-end, according to M-Lab. Russia, the region's largest broadband market still lags, with an average speed below 15 Mbps. Although fiber-optic networks supporting broadband speeds above 100 Mbps are widespread in Russia’s major cities, such as Moscow and Saint-Petersburg, many homes in remote regions still rely on legacy DSL and cable networks that support relatively low internet speeds.

Global Multichannel is a service of Kagan, a group within S&P Global Market Intelligence's TMT offering. Clients may access the full article by clicking here.