Our Materials Price Index (MPI) rose 3.3% last week, the largest weekly increase since March in the immediate aftermath of Russia's invasion of Ukraine. The recovery in prices was narrow, however, with only three out of the index's ten subcomponents increasing. Even though the MPI jumped strongly last week, it is still 17.8% below its all-time high established in early March. 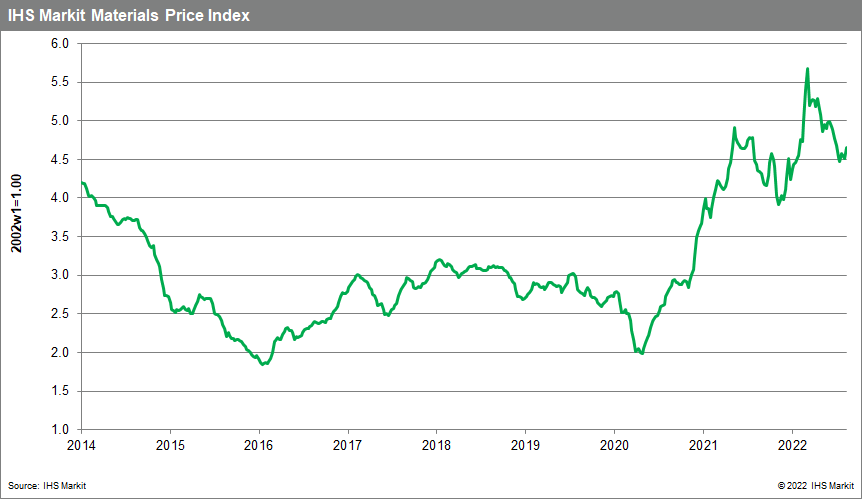 A rise in energy prices pushed the overall MPI higher. Non-energy prices were in fact down by 2.2% last week. However, natural gas and coal both increased significantly, with the energy sub-index climbing 13.8%. UK spot landed prices of liquefied natural gas (LNG) reached $57/MMBtu, up $15 for the week. Asian prices also increased to $59/MMBtu, a 31% gain. Prices were reacting to uncertainty over global supply as Russia continues to restrict natural gas flows to the European Union, raising fears of widespread shortages in Europe this winter. Higher energy prices also led to price gains in other commodities with zinc prices hitting a ten-week high after Nyrstar announced the indefinite closure of its Dutch zinc smelter. It was a different story in steel markets, however, as the iron ore price fell to $105/tonne from $110/tonne the previous week as power rationing in mainland China forced some steel mills to close hitting demand for raw materials.

Prospects for weaker demand continue to weigh on commodity prices, with data last week further harming market sentiment. Official data from mainland China on retail sales and industrial activity came in below market expectations, which sent oil and metals prices lower. Although supply-side risks in energy markets and low inventory in some metals have the potential to trigger prices increases later this year, commodity prices broadly appear to have peaked. Even more encouraging, this change upstream in supply chains is migrating downstream into intermediate material and component prices and foretells a slowdown in goods price inflation into 2023. How quickly this change in goods price inflation translates into lower consumer price inflation remains an open question, however.