Our Materials Price Index (MPI) fell 4.3% last week, with eight of the ten sub-components declining. Markets were reacting to the latest round of aggressive monetary tightening in western economies as the Federal Reserve and Bank of England announced interest rate rises. This sparked the sharp decline in the MPI and leaves the index at its lowest level since December 2021. 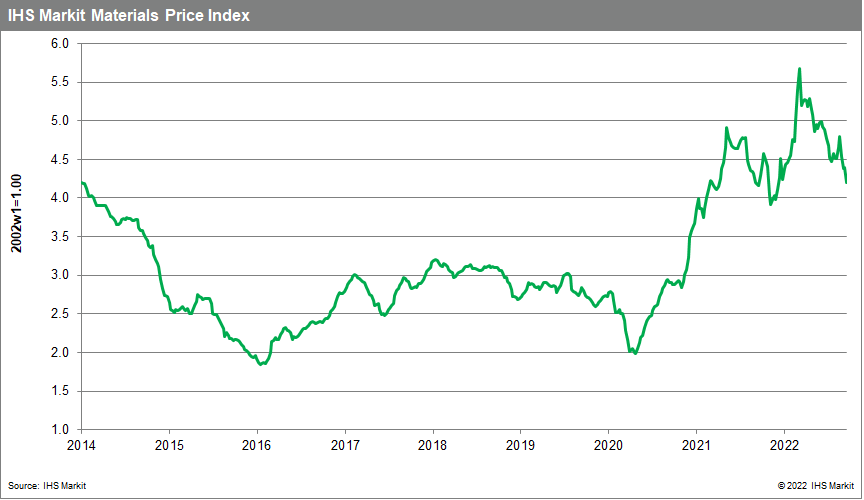 Commodity price declines resumed last week with only freight and rubber recording increases. Volatile natural gas prices in Europe and Asia have been a feature of commodity markets in the past year but last week also saw a large downward move in North American prices. The MPI's energy sub-index declined 7.9% as US spot prices of Henry Hub liquefied natural gas (LNG) fell to $6.83/MMBtu, from a high of $8.70 the previous week. European prices also dipped to $40/MMBtu, a 17.9% drop. US prices were reacting to cooler weather across the continent which significantly reduced demand for gas from the power sector. The US Energy Information Administration (EIA) released figures showing storage levels had improved in the week ending September 16 placing further downward pressure on Henry Hub prices. European prices also declined on positive figures on storage levels ahead of peak winter demand. Chemical prices dropped last week with the sub-index declining 3.1% amidst weak demand in the US. US propylene prices fell to 35.38 cents/pound from 40 cents/pound as lower consumer spending and construction activity weighed on buyer interest. Lower demand from construction also drove the lumber sub-index down 8% last week.

Prospects for slower demand continue to weigh on commodity prices, with central bank action last week further harming market sentiment. The Federal Reserve raised interest rates by 75 basis points, the third consecutive rate hike of this magnitude, and further increases are assured as it continues to battle inflation. The Bank of England raised its policy rate 50 basis points with the interest rate now at a 14-year high of 2.25%. A strong US Dollar was another factor in last week's price slide across commodity markets. Commodity prices have peaked although supply-side risks in energy markets and low inventory in some metals have the potential to trigger prices increases in the near term. This change upstream in supply chains is migrating downstream into intermediate material and component prices. The decline in commodities foretells a slowdown in goods price inflation into 2023. When combined with central banks eagerness to tackle headline inflation, more price declines are expected.