Our Materials Price Index (MPI) fell 5.4% last week, with all but one of the index's ten sub-components declining. Markets are growing increasingly anxious about global growth, particularly in mainland China, and continued aggressive monetary tightening in the United States. This sparked the second largest weekly decline in the MPI this year and leaves prices 20% lower than the all-time high established in March 2022. 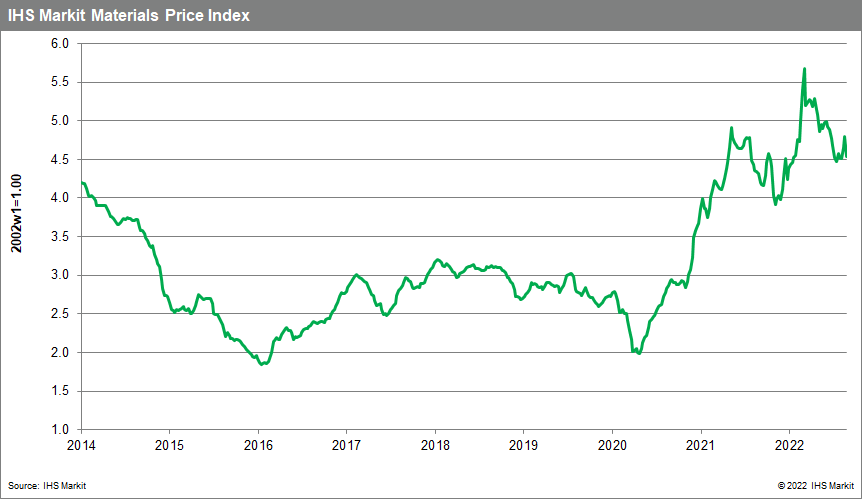 A broad sell off on commodity markets saw everything from energy to lumber prices fall last week. Volatile natural gas prices in Europe and Asia have been a feature of commodity markets in the past year and last week was no exception. The MPI's energy sub-index declined 11.1% as Asian spot landed prices of liquefied natural gas (LNG) fell to $57/MMBtu, down $20 for the week. European prices also dipped to $55/MMBtu, a 21% drop. Prices were reacting to news that the European Union plans to intervene to reduce electricity prices and that Germany had been successful in its efforts to increase natural gas storage levels ahead of the winter months. There were also price declines across industrial metals last week with our steel making raw material sub-index down 3.2%. Iron ore prices dipped below $100/metric ton for the first time since November 2021 as the outlook for Chinese steel consumption worsened. It was announced that steel production in the key centre of Tangshan is expected to be significantly lower in the second half of the year as demand from the construction sector remains weak.

Prospects for slower demand continue to weigh on commodity prices, with data last week further harming market sentiment. The mainland China General Manufacturing PMI figures showed that production rose at the softest pace for three months, while new orders fell for the first time since May. In addition, Fed Chair Powell's Jackson Hole speech reiterated a commitment to lower inflation, noting that this may require a prolonged period of below trend growth, dashing market hopes that interest rates might be cut in the first half of 2023, which placed additional downward pressure on prices. A strong US Dollar was another factor in last week's price slide across commodity markets. Although supply-side risks in energy markets and low inventory in some metals have the potential to trigger prices increases later this year, commodity prices have peaked. Even more encouraging, this change upstream in supply chains is migrating downstream into intermediate material and component prices and foretells a slowdown in goods price inflation into 2023. How quickly this change in goods price inflation translates into lower consumer price inflation remains an open question, however.